Yigit Akin: War Profiteers and the Ottoman Home Front during World War I 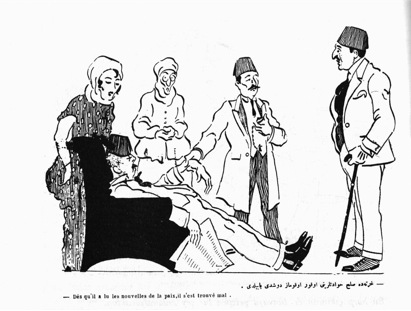 War Profiteers and the Ottoman Home Front during World War I

On the Ottoman home front, the social and economic conditions increasingly worsened from the summer of 1916 onward as the problems of food supply and its fair distribution became more and more acute. Consequently, social tensions began to emerge, especially in urban centers, concerning inequalities over access to food. These home-front tensions were sharpened by the unequal nature of the sacrifices demanded of the population. These tensions can be explored through the negative social types generated by the war, most prominently through the identity of the war profiteer. The war profiteer was perhaps the most ubiquitous negative figure in the Ottoman press and literature during the war and immediate post-war years.

While the war spelled misery, poverty, and death for the majority of Ottoman citizens, it also spawned enormous business opportunities for a relatively small group of people. A number of contractors who provided the army with manufactured and non-manufactured goods benefited greatly from the wartime expansion of the army’s consumption. Similarly, merchants or bureaucrats close to the ruling party (Committee of Union and Progress, CUP) circles who controlled the food supply to big cities earned enormous amounts of money. By the end of the war, all of these groups that had amassed large fortunes came to be seen as the real winners of the war.

Public criticism against profiteering and war profiteers had already begun during the course of the war. Especially from the second half of 1917 onward, when censorship of the press was relaxed, newspapers, including those close to the CUP line, published articles that condemned profiteers and criticized the government’s passiveness in the matter. But, with the end of the war and the flight of the Unionist leaders, the campaign against war profiteers spread throughout the entire media. In the last months of 1918 and in early 1919, newspapers, magazines, and other publications were full of denunciation and stigmatization of war profits and profiteers. Actually, war profiteers, along with the Unionist leaders, became the most visible scapegoats of the era who were held responsible for the defeats and disasters that had befallen the empire. Writers and contributors did not hesitate to point out the fact that the Unionist policies of creating a “national economy” and a “national bourgeoisie” turned out to be devastating for Ottoman society.

One of the most well-known publications which criticized war profiteers was Sedad Simavi’s cartoon album, Yeni Zenginler/Les Néo-Riches (1918). Among other media outlets, cartoon albums and satirical magazines were important venues to express the widespread public resentment against war profiteers. In the cartoon above, Sedad Simavi, a young cartoonist and publisher, successfully captured the social tensions that plagued wartime Ottoman society.

Both in literary and visual works, including Simavi’s Les Néo-Riches, the wealth and lavish lifestyle of the war profiteers occupy a central role. Almost all of these artistic products vividly describe scenes of profiteers’ dinner parties in their magnificent mansions, long lists of delicious and exotic dishes, and profusions of food and drink. A more prominent theme, however, is that profiteers owed their very existence to the ongoing war. The longer it continued, the richer war profiteers became. This is why the profiteer in the cartoon above “passed out as soon as he read the news about the peace”. Their fortunes were built upon the Ottoman people’s misery and deprivation. This contrast between those who shouldered the brunt of the burden for the war and the profiteers who enjoyed their privileged status surfaced more clearly towards the end of the war. In tandem with deteriorating social conditions, these tensions on the home front strained the legitimacy of the Ottoman state and intensified pressure on government and military commands. This loss of legitimacy in turn posed a sharp challenge to the state’s authority and its capacity to maintain social and cultural integration. Among other factors, this disaffection, sparked by a deep sense of injustice, helped to cripple the Ottoman war effort.