Tait Keller: Soldiers in the Sand 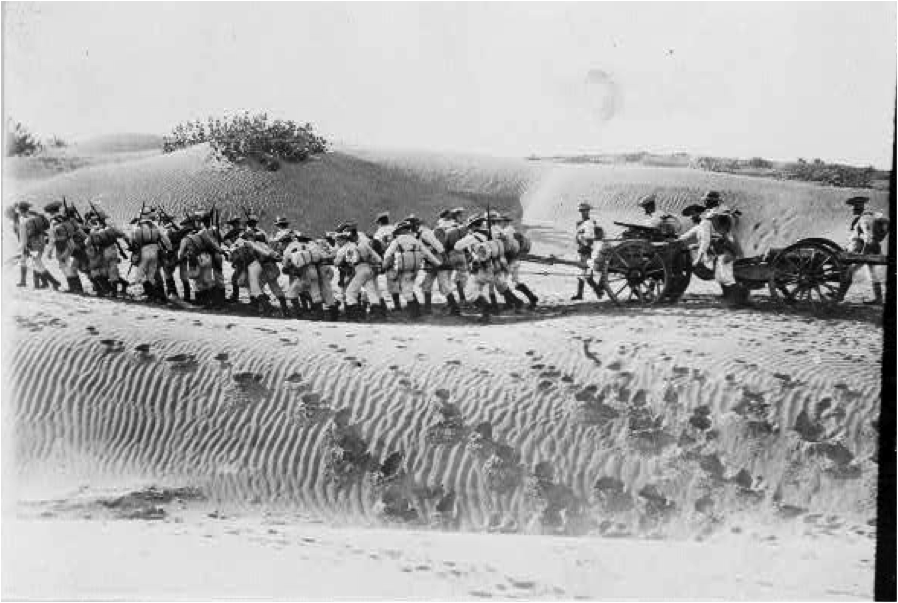 British Troops in Mesopotamia (1914?) Photograph courtesy of the Library of Congress

On the same fateful day that Archduke Franz Ferdinand fell to an assassin’s bullet in Sarajevo, the Grand Vizier of the Ottoman Empire informed British and German officials in Istanbul that their joint-stock corporation, the Turkish Petroleum Company, would receive a lease on all petroleum deposits in the vilayets of Mosul, Baghdad, and Basra. Although soon overshadowed by the July Crisis, the promise of oil concessions from the Sublime Porte worked like a siren song on the British Admiralty, various multi-national business interests, and other states eager to gain an upper hand in energy reserves. Since the 1890s, geologists had suspected that rich petroleum deposits lay buried beneath the Mesopotamian sands, just waiting to be exploited for commercial gain.[1] Yet only when the British Royal Navy began converting its warships from coal-burning to oil-fired around 1912 did Whitehall seriously consider investing in crude. It then did so with force. Foreign Secretary Sir Edward Grey sent ultimatums to Istanbul whenever an Ottoman company eyed those oil fields and parried moves by the Royal Dutch Shell Group when it lunged for the land. In 1914, the British government became a majority shareholder in the fledgling Anglo-Persian Oil Company, which had drilled the Iranian oilfields in the neighborhood of Shustar and piped petroleum for over 140 miles to the Abadan Island refinery on the northern coast of the Persian Gulf.[2] With the outbreak of war later that year, the Admiralty saw the opportunity to further extend British control over the Mesopotamian oil fields and demanded that troops be dispatched to the region. The Indian Expeditionary Force D arrived late autumn, fended off attacks, and guarded Britain’s holdings for the duration of the conflict. So go the standard histories of the First World War in Mesopotamia, which typically emphasize oil geo-politics. This approach is not without merit. Afterall, the need to control crude resources influenced military strategy to a certain degree during the war and informed political schemes afterwards.[3] We live with these legacies still.

Yet for the soldiers on the ground, regardless of nationality or ethnicity, oil mattered little. Instead, what impressed combatants was the desert environment. Considered both brutal and beautiful, the natural world acted as a great equalizer among the armies maneuvering for a tactical advantage. Well-supplied British and colonial troops unfamiliar with the region’s harsh conditions found themselves on equal footing with ill-equipped but more knowledgeable Ottoman forces. The image of His Majesty’s soldiers struggling to lug two light canons over sand dunes in the midday sun offers us a small glimpse into what fighting in the desert was like. The terrain proved nearly impassable for wheeled weapons and vehicles. Often eight-horse teams were required to pull a single piece of small artillery. As the picture suggests, everything that troops needed had to be imported. Except for a few groves of date palms, timber and food sources were scarce. But weather often dictated when supply caravans could travel. Blinding sandstorms, common during the spring, reduced visibility to mere inches. High temperatures during the summer wreaked havoc. One officer recounted how airplanes could not fly between the daytime hours of nine to five because of the “difficulty of climbing through the layer of rarified air which was super-heated by radiation from the ground.” Men and mules frequently suffered heat strokes. The furnace-like setting made for a hotbed of disease. Plague, malaria, smallpox, dysentery, cholera, typhus, and something English soldiers dispiritingly called the “Baghdad boils,” afflicted the troops. Men blamed brackish water and the bloodlust of sandflies, unrelenting midges that seemed to attack not individually but in massive swarms, for spreading sickness. The heat and sand also played tricks on the eyes. Mirages made army scouts doubt their senses. One soldier observed that in the open desert: “Troops would appear to advance, to recede, to become invisible; a small bush would turn into a platoon of infantry; a few sheep would become a squadron of camelry.”[4]

The most pressing problem for soldiers fighting in Mesopotamia was water. Given the arid environment, this seems obvious. What might surprise us, however, was that troops complained not about a lack of water but an overabundance. Marshland and shallow ponds dotted the alluvial plains. During the spring, snowmelt in the Caucasus Mountains and the highlands of Asia Minor swelled the rivers and lakes below, which burst their banks and turned lower Mesopotamia into a morass. To prevent wholesale inundation, local civilians had piled heaps of loose dirt along the banks, but furious waters easily breached these earthworks. Combatants also altered the land with trenches and protective dams, changing water flows and directing the course of rivers. Despite these efforts, floods made military operations impossible. “Glutinous” mud brought offensives to a standstill. Men exerted all their strength just to lift their legs out of sucking quagmires.[5] Pictures of drenched soldiers caught knee-deep in Mesopotamian mud mirrored photographs from the Western Front where men drowned in the trenches at Ypres.

The desert environment simultaneously set the Mesopotamian theater apart from the European fronts and highlighted commonalties among men under arms. Moreover, when viewing the Great War in the Persian Gulf from an environmental perspective, we see that Ottoman soldiers were neither passive players in the conflict nor mere patsies of the great powers. Just like the British troops, they faced the elements and actively shaped the land to suit their needs. Indeed, it appears that the two sides shared more in common than either cared to admit.

[3] Not all officers believed that protecting pipelines and refineries should be the IEF’s primary objective. For more these debates and decisions see Moberly, The Campaign in Mesopotamia; East India (Military), Despatches Regarding Operations in the Persian Gulf and Mesopotamia (London: His Majesty’s Stationery Office, 1915). For more on the political wrangling between the United States and Great Britain in 1919 see Robin Bidwell, ed., British Documents on Foreign Affairs: Reports and Papers from the Foreign Office Confidential Print, Part II, From the First to the Second World War Series B, Turkey, Iran, and the Middle East, 1918-1939 (Frederick, MD: University Publications of American, 1985).