Stefanie Wichhart: Year of the Locust in Photography

Teaching the famine: Salim Tamari’s Year of the Locust and the photographs of the American Colony in Jerusalem

The trauma experienced by Greater Syria during World War I as a result of widespread famine has been well documented by numerous scholars. Largely a result of the wartime British and French naval blockade in the Mediterranean and the requisitioning policies of the Ottoman army, the famine in Palestine was  exacerbated by the 1915 locust plague. A number of materials relating to this locust plague and the larger war effort have recently become available, providing a wonderful opportunity to develop a local case study of the ways in which the war affected the lives of civilians in Palestine and serving as a valuable balance to traditional political and diplomatic narratives of the war. What follows is a description of how I intend to use these sources to teach this period in my 200-level course on the Israeli-Palestinian conflict.

The publication of Salim Tamari’s Year of the Locust: A Soldier’s Diary and the Erasure of Palestine’s Ottoman Past provides a powerful and accessible account of World War I in Jerusalem through the lens of soldier Ihsan Hasan al-Turjman.[1] The brief diary brings home the hardships of the war, as Turjman describes the draconian policies of the local Ottoman administration, the senseless loss of life in the Ottoman military campaigns, the food shortages and skyrocketing prices that resulted from the famine and locust plague, and the hardships faced by those recruited for the Ottoman labor battalions.  My students will approach this work having already read James Gelvin’s account of pre-war Jerusalem based on the diary of Wasif Jawhariyyeh, which provides a picture of a very different and more prosperous Jerusalem.[2] The contrast between these two Jerusalems will emphasize just how disruptive the war was to the local population.

After students read the Tamari text, I will use photographs from the American Colony in Jerusalem collection to shape class discussion. Held at the Library of Congress, this digitized collection provides a rich and accessible source for studying the effects of the plague and efforts to eradicate it. Jemal Pasha recruited the photographers of the American Colony to document the plague, and John Whiting published an article on the plague in National Geographic in December 1915, including many of the colony’s photographs. The Whiting article is of particular interest due to the style in which it is written. On the one hand, it provides detailed scientific descriptions and illustrations of the anatomy of the locust and its life cycle. On the other hand, the entire article is framed in biblical terms and peppered with biblical references. To Whiting, this is truly a plague of biblical proportions. The textbook my students use for this course points out that westerners in the nineteenth and early twentieth centuries viewed Palestine through the lens of biblical history, and this article clearly illustrates and reinforces this point.[3] 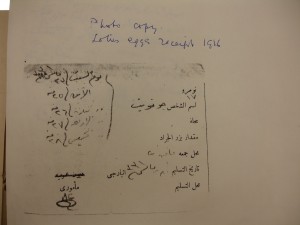 The American Colony collection is particularly useful for the information it provides on efforts to eradicate the locusts, and can serve to introduce students to the environmental history of the Middle East during the war. Both Ihsan Hasan al-Turjman and John Whiting note the mobilization of the local population to collect locust eggs as a first attempt to limit the extent of the destruction. Whiting noted “Once the alarming extent to which these eggs were laid was realized, the authorities issued a proclamation, dated April 19, requiring each male person from 16 years to 60 to gather eleven pounds of the eggs.”[4] Turjman, despite his disillusionment with the local Ottoman administration, noted with approval the government’s announcement of a fine to be levied on all local citizens, gradated by income, as an alternative to submitting the required quota of locust eggs, “For the locusts do not discriminate between rich and poor.”[5] 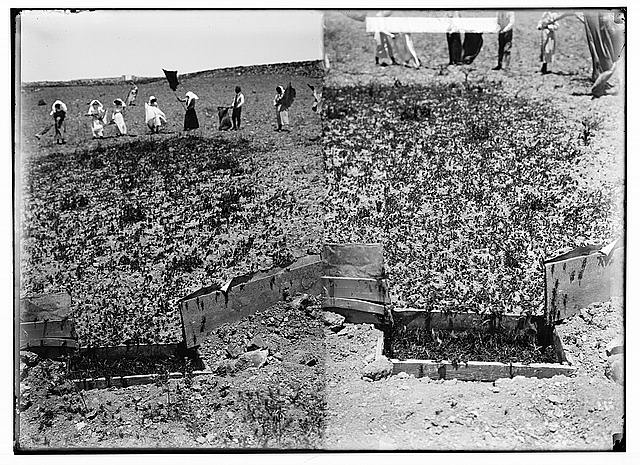 The American Colony materials for this period are available in different sections of the Library of Congress website:

–The entire locust plague photograph album is available at: http://memory.loc.gov/ammem/collections/americancolony/locusts.html

This page is part of the “American Memory” project and includes an informative discussion of the plague itself and the efforts to eradicate it that would be a useful overview for undergraduate students.

–The American Colony album related to WWI and the campaign in Sinai and Gaza is also digitized and available:

While this album would be of use to anyone studying the history of the war in the Middle East, it works particularly well in conjunction with Tamari’s book, since it documents many of the campaigns that Turjman mentions in his diary.

–The Library of Congress also has a virtual exhibit on the American Colony that provides an overview of the colony’s history and includes information on the locust plague and the colony’s relief efforts during World War I: http://www.loc.gov/exhibits/americancolony/

–The Matson (G. Eric and Edith) Photograph Collection in the Prints and Photographs division includes a much larger selection of digitized photos related to the 1915 locust plague as well as later infestations that would be of particular use to researchers interested in the environmental history of the area.

-The Manuscript Division of the Library of Congress holds the American Colony in Jerusalem papers and the John Whiting papers. While these are rich sources for information on the many other programs of the American Colony, the most useful materials relating to the locust plague and World War I in Jerusalem have been digitized and are therefore available to the researcher without a site visit to the Library of Congress.

[1] Salim Tamari, Year of the Locust: A Soldier’s Diary and the Erasure of Palestine’s Ottoman Past (Berkeley: University of California Press, 2011).