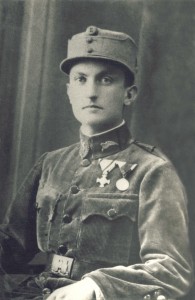 FROM CONSTANTINOPLE TO NEW YORK (working title) is intended to become a documentary film on WWI in the Middle East. It will be based on an Austro-Hungarian foot soldier’s detailed memoirs of his war experience in the Habsburg army stationed in Istanbul and Palestine. Antoine Köpe was born in Istanbul in 1897 to parents of French and Hungarian descent. He was raised in the Ottoman Empire, first in Thessaloniki, now in modern-day Greece, and then, as a teenager, in Istanbul, in modern-day Turkey. Like his father, Antoine received a French education and spoke primarily French, the language in which his memoirs are written. He began writing his memoirs in 1945 and finished them in 1959. These memoirs were in his grandson’s possession until now, and they are to be published simultaneously with the release of the documentary film based on them.

In his youth Antoine witnessed remarkable history in the making: the declaration of WWI, life as a raw recruit in the Austro-Hungarian Army in Istanbul, fighting on the Palestinian front and defeat, mass migrations, the Turkish War of Independence and Mustafa Kemal Atatürk becoming the leader of Turkey, and the development of a national economy in the newly formed Turkish Republic. In 1962 Antoine and his wife Emilie joined their émigré children in the US. Antoine died of cancer in 1974.

Antoine belongs to an era when it was deemed natural to co-exist with different ethnic groups within the same borders, before European nationalisms began severely disturbing this understanding in the 19th century. Through his vivid and sometimes humoristic descriptions of many key historical events, Antoine gives us a more nuanced portrait of life on the ground. Antoine’s memoirs tell the complex history of the War in the Middle East, and they shed light on the war’s enormous impact on so many ordinary civilians, so rarely captured in the historical discussion of the war in the Middle East.

FROM CONSTANTINOPLE TO NEW YORK will detail the staggering number of Ottoman and Austro-Hungarian Empire casualties of the First World War – civilian and military. It will also relate the story of the political upheavals that followed the war, including forced migrations of unprecedented scale. Through Antoine Köpe’s eyes, we see intolerance and persecution dispersing thousands of families across the world, including Antoine’s own family, which ended up in Italy, France, Hungary, and, eventually, in America. This film will be, then, a unique account of the history of diasporas, an increasingly important sub-field of global history.

FROM CONSTANTINOPLE TO NEW YORK also offers Antoine’s view of the postwar era. Antoine gives us the picture of what it was really like to live in the region during this tumultuous period. This is perhaps the strongest point of the memoirs, giving the audience a real life account of how it was like to be a part of the Great War. It is the film’s aim to convey this feeling expressed in the memoirs to the film’s audience.