Holly Shissler: After the War: In Search of the Missing 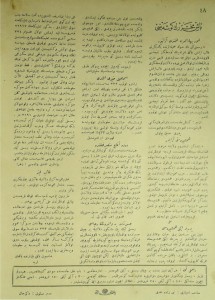 World War I produced huge population dislocations in the Ottoman Empire. In addition to those directly engaged in combat who were killed or captured and whose families never received notification of their fate, large numbers of civilians also died or were killed or displaced due to forced deportations, massacres, starvation, disease, or flight before advancing armies or bands of irregular troops. Many people, both soldiers and civilians, were never found and their fates never discovered by their families. The outbreak of the war with Greece following the close of World War I produced more such losses and slowed and complicated the process of searching for those missing since the years of World War I itself. Thus, survivors actively sought information about missing families for many years following the war. They hoped at best to be reunited with relatives whom the tides of war had perhaps carried to distant locations. At the very least they desperately hoped to learn how and where sisters, brothers, fathers, and mothers had died. Frequently official channels had little or no information to offer, were overwhelmed, and were not particularly responsive. In the mid- and late 1920s, one well-known magazine, Resimli Ay (The Illustrated Monthly) published appeals for information about missing persons on the back page of the magazine in the section reserved for letters to the editor, which the publication termed “the editor’s corner.” The page reproduced here, from November 1925 (Teşrin-i Sani 1341), contains several such requests for information. As a fairly typical example, one of these–located in the bottom left corner—asks for information about a young girl lost at the time that the Trabzon region on the Black Sea fell to the Russians.

I have read in your journal numerous times [about] your finding missing persons through the medium of your esteemed publication. We also have a missing person.

She is Behiyye daughter of Ali of the Çalıkoğulları from the town of Kavala in the Yomra district (nahiye) of Trabzon.

When Trabzon was occupied by the Russians, she fled with her mother to Ordu. We received news that she was placed in the Ordu orphanage school by her mother and that after her mother died in Ordu all of the orphanage’s students were sent to Istanbul in 1333 [1917].

Sir, in the name of humanity I beg anyone who knows whether she is in one of the orphanages or some other place to provide that information to my address: Ferid the fisherman in the Samsun Fish Market.

The problem of massive numbers of orphans was acute in the emerging Turkish Republic in the post-war years. Large numbers of children needed to be cared for, as well as identified and returned to their families where possible. (These issues were particularly fraught in the case of Christian, especially Armenian, children and debate raged over what nation these children belonged to and how they should be educated and cared for). Girls of all backgrounds were vulnerable to sexual and other exploitation. This was a reality that the editors of Resimli Ay were very alive to, and they addressed it on numerous occasions, denouncing prostitution, the abuse of female domestic servants, and the general difficulty for women and girls of entering the paid workforce in other capacities.

Resimli Ay itself was a magazine-type publication that came out once a month between 1924 and 1931 (the name was briefly changed during part of this period to Sevimli Ay–The Adorable Monthly–due to some legal and political complications). Its editors were the well-known literary and political couple, M. Zekeriya and Sabiha (Sertel). Zekeriya and Sabiha were strong supporters of the Republican project in its early years and represented the left end of that political spectrum. In the 1920s they edited a number of serial publications with the word “Resimli” in the title; Resimli Ay is the most famous of these. The Sertels used their “Resimli” publications to educate and entertain the public and to push government and society on a variety of what today we might term social justice issues involving the poor, those made homeless by the war, enlisted soldiers, and women. Sabiha in particular dedicated considerable ink to discussing the conditions of women both in legal terms and in terms of the practical “on-the-ground” realities of poor women’s lives. These were topics that the great social and human upheavals of the war years had made even more pressing than before.