Ayse Polat: WWI and Prostitution: the Banned Story of a Prostitute Woman 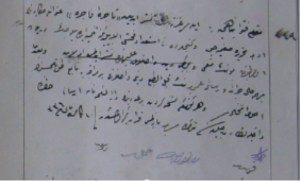 The council Dar’ul Hikmet’ul Islamiye (the Abode of Islamic Wisdom) was established under the office of the Ottoman Sheikh al-Islam in 1918 and addressed the religious and moral ramifications of World War I. One of the council’s main tasks was to inspect publications for their religious content and to demand the censorship of those it found religiously and morally misguiding, improper, or threatening. The story Tacire-i Facire (“The Female Prostitute Merchant”) constituted one such case and appeared in the council’s records as follows: “The story entitled “Tacire-i Facire” published in the paper İleri does not conform to the decency of writing, and can enhance the youths’ tendency for prostitution to such an extent that it needs to be banned…”[1] Tacire-i Facire was published in İleri (Forward) between November 29 and December 31, 1919, in twenty-three installments. While the council’s ruling is dated January 10, 1920, the story might have been censored prior to this date because, despite the previous issue stating that it would continue, the story did not reappear in İleri, and its column was left blank on January 4 – a contemporary pattern observed regarding censored pieces in journals and newspapers. However, its publication seemed to strengthen the Dar’ul Hikmet’ul Islamiye’s determination to receive issues of papers and journals before publication, as the above cited record continues: “From now on the procedure of subjecting journals and newspapers to a religious and moral inspection before publication is to be undertaken, and one of their daily issues is to be sent to the Dar’ul Hikmet’ul Islamiye. It is decided to officially write to the Ministry of Internal Affairs [about these matters].”[2]

Tacire-i Facire tells the story of an inexperienced, full of life, young girl who becomes a feeble, desolate, and exhausted prostitute as a woman. It is the story of different kinds of men cutting through her life; from the stepfather who tries to sexually assault her, to the beloved who pledges to save her and takes her to a different city, makes love with her at a hotel, leaves her with the promise of going back and telling everyone the truth, while in the end never returning, and, worse, stealing all her money. From the rich, kind man who pays the hotel servant to have sex with Sonya, to intellectuals with whom Sonya chats in the coffee houses of Rome about capitalism, socialism, and natural versus the attained nature of beauty. From the man offering Sonya marriage while she continues to work as a prostitute until they make enough money to start a business, to the young boy showering Sonya with gifts and yet not even asking for a kiss in return, as he is terrified of catching a sexual disease after being misdiagnosed with gonorrhea. And finally, among others, from the poor romantic to the married man who visits Sonya whenever he has time free from his family.

However, Tacire-i Facire is not simply a story – it is a high intellectual piece on prostitution. As prostitution constituted a major problem during and after WWI, the author of Tacire-i Facire, Celal Nuri, presents the story of a prostitute and through her conversations demonstrates the complexity of the questions of morally accepted vs. rejected forms of sexual acts, relative vs. universal aspects of morality, and the problem of freedom of choice, necessity, and moral responsibility. It is impossible to grasp a complete understanding of the reasoning behind the Dar’ul Hikmet’ul Islamiye’s demand to ban the story, except for the council’s brief remark on its negative impact on the youth. Could it be the plot of the story that caused it to be banned? Alternatively, could it be Sonya’s monologues, in which she challenges destiny and moral responsibility and rejects her condemnation as an immoral person, as cited below?

Oh my inauspicious fortune, my bad luck…you throw me to a shore of prostitution, to a desolate, heartless, soulless, lifeless and callous, false and brutal island. Yes, I am now a prostitute. Will I age and die without having the pleasures of having a husband, saying goodbye to my childhood in a proper manner, marrying with a ceremony in front of the priests, and on the first night, passing from childhood to womanhood in a royal manner, having honeymoon, becoming a house lady, giving birth to beautiful kids and raising them? With what authority and right does my fortunate deprive me of all these?…Am I a prostitute from now on? Cannot any compassionate god give me back my original virginity?…Am I going to sell my body until my last breath?…The law permits even killing, if it is out of necessity. Did I have an option [but not to submit my body]…?[3]

Oh honor! Since the day I was born, you were my aim and longing…. Why did not you come to save me when Ivan [her beloved] meanly left me and killed the purity of life? If I were to dream you, I would remain hungry, thirsty, with no place to stay at, and with no one around during the most grievous moments… Honor! Who invented you and then who sanctified you?… You [honor] are a relative, conjectural, and imaginary truth.[4]

Could it be the dialogue between Sonya and a married woman, during which the latter expresses her jealousy of prostitutes for their sexual freedom, compares marriage to a prison, and advocates adultery for its incredible “joy of cheating”?[5] In addition, here Sonya suggests founding a school to train prostitutes, just as in ancient Alexandria, in “the art of orospuluk, or whoredom.”[6] While many other aspects of the story might have contributed to the Dar’ul Hikmet’ul Islamiye’s ruling, it is likely that this dialogue had a particular bearing on its decision; and yet, in the end this highly political, philosophical story personifies the dilemma of prostitution as experienced within the context of World War I.