Andrew Patrick: Critical Communal Choices at the End of the Ottoman Empire

At the end of the Ottoman Empire, many community leaders and individuals within those communities were faced with “critical choices” that often determined the fate of themselves and the particular community to which they belonged.[1] Having witnessed what had transpired in the chaos of World War I, people realized that making the wrong choices could harm their standing at best, or destroy their communities at worst. The deportation and subsequent elimination of many Armenian and other communities during the war served as distressing evidence of this. In making these choices, people had to weigh past loyalties with new realities, and the apparent situation at present with what might come to pass in the future. The summer of 1919 in Greater Syria was a moment of many critical choices for the people of the region. With the arrival of the King-Crane Commission (a group of Americans sent by the Paris Peace Conference to learn the political desires of the inhabitants of the Ottoman lands), individuals and groups in Greater Syria had to decide what political stance they would take before this group. The issues on which they were forced to form opinions included whether the Arabic speaking Ottoman lands should form one new country or several, whether or not they would ask for independence or help from a mandatory power for whatever new political entity they were advocating, and whether or not Zionism should move forward in any form. In sum, the charged political atmosphere of Greater Syria was a political minefield for its inhabitants at this moment.

Palestine was the first place in which the King-Crane Commission saw petitioners in Greater Syria and it was full of individuals and communities having to make such critical choices. There were many people trying to influence these decisions, with one of the most active groups being operatives from the British-backed government of the Hashemite Prince Amir Faysal in Damascus. These operatives were combing the cities of Palestine and trying to convince the elites of the region to ask the Commission for the independence of a united Greater Syria under the Hashemite Prince Amir Faysal (with British assistance) and also to argue vehemently against the implementation of Zionism in any form. The vast majority of Muslim and Christian elites did agree to make statements along these general lines, with two significant modifications: they mainly requested complete independence without British assistance and did not ask for Faysal to be their leader because, according to one Muslim delegation in Jerusalem, they knew little about him and had no “private relations with him.”[2] Despite having much material power in the region, both Faysal and the British held little sway in the political atmosphere of 1919 Palestine. 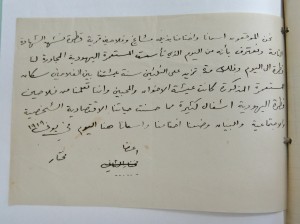 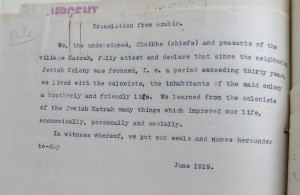 Two intriguing exceptions to the generally overwhelming testimony along these lines came in the form of petitions from two small villages. Like Faysal, the Zionists had sent a number of agents to parts of Greater Syria in hopes of attaining the backing of non-Jewish populations (especially those who had gained some benefit from the Zionist colonies) and managed to get two petitions of support which were immediately sent to the King-Crane Commission. One such petition, from the mukhtar (leader) of a small village near Haifa (though possibly written by a Zionist agent), stated that “we declare that there is no reason to forbid to the Jews the immigration into Palestine, especially if we take into consideration the benefits the art of agriculture and our estates will draw from their presence”.[3] Another “Sheikh” from the village of Qatra (‘Katrah’, petition shown above) wrote to the Commission that they had “learned from the colonists of the Jewish Katrah many things which improved our life, economically, personally and socially”, though the petition did not specifically mention support for Jewish immigration.[4] Though no evidence exists about the decision making processes of these men, it is likely that they chose to dissent from the prevailing political project of their neighbors in Palestine (independence/unity/anti-Zionism) because local conditions, in these two cases, appear to have trumped all other considerations. More specifically, the Zionist colonies aided the economies of their respective communities and they were likely afraid of losing these benefits. The critical nature of the choices made by these two community leaders was emphasized by articles in the Damascus press which had heard that there were some pro-Zionist petitions from Arabs and chastised those had supported Zionism in nationalistic terms, claiming “The curse of God and the Arab people fell upon the heads of these men, – betrayers of their people and their birthplace.”[5] The consequences of these decisions on the communities involved is one that requires more research but one thing remains certain about the summer of 1919 in Greater Syria: political decisions were made that shaped communal futures and altered the region’s political balance in crucial ways.

[2] Jerusalem, Israel, Central Zionist Archives, L4/794, ‘Reception of the Moslem Delegation by the American Section of the Inter-Allied Delegation for Mandates in Turkey’, 16 June 1919. Hereafter known as CZA.