Beyond the well-known European theaters of World War I, the southern shores of the Mediterranean and the coastlines of the Red Sea represented strategic fronts in which various Central and Allied powers sought to mobilize local forces (more and less directly) against their enemies. The most well-known of these movements was the “Arab Revolt” within the Ottoman Empire, led from the Hejaz north towards Syria by Faisal, son of Sharif Husayn of Mecca, with British support. Though unique in its relative success, relevance to the postwar negotiation of the status of Syria, Palestine, Transjordan, and Iraq, and the exceptional coverage it received through the writings of T.E. Lawrence, this British-Arab partnership was not an isolated case. Across North Africa, German agents actively tried to foment anti-French resistance, particularly in Morocco, where they enjoyed relative freedom in Spain’s northern zone in Morocco, distributing gold and arms trying unsuccessfully to incite tribal leaders in the Rif and Jibala to attack the French zone (citation). The most productive attempt by the Central Powers to put pressure on the Allies was launched from eastern Libya in the fall of 1915 into Egypt’s Western Desert. This other Arab Revolt—instigated due to the efforts of Ottoman liaisons and with Ottoman and German material support—was carried about by the Sanusi forces of Sayyid Ahmed al-Sharif.

From the very beginning of the war, Egypt, represented the strategic node and ultimate prize of this southern theater war for both sides. Germany put pressure on the Ottomans from the fall 1914 to attack the Suez Canal zone, the primary artery of the British Empire, to relieve pressure on the Western Front. Ottoman forces under Jamal Pasha’s command crossed the Sinai early in 1915, expecting their advance would catalyze a popular revolt against the British, who had implemented increasingly direct control since the early 1880s and declared Egypt a protectorate in 1914. After the Ottoman attack was decisively turned back and the revolt failed to materialize, Jamal Pasha withdrew to consolidate the Ottoman flank in the Arab provinces.

Over the next two years, the British negotiated with multiple Arab leaders (including the well-known correspondence between High Commissioner Henry McMahon and Sharif Husayn of Mecca) in attempts to instigate an uprising within the Ottoman Empire. The lesser-known parallel strategy on the Ottoman side focused on getting tribal groups in eastern Libya to advance against the British in Egypt’s Western Desert.

The critical parallel figure to Sharif Husayn for the Ottomans and German in the west was Sayyid Ahmed al-Sharif al-Sanusi (1876-1923).  Sayyid Ahmad’s grandfather, Muhammad ibn Ali al-Sanusi, founded a Sufi order, the Sanussiya, in Cyrenaica in the 1830s. By the early 1900s, the Sanusi network of lodges had spread to Tripolitania, to Egypt’s western oases, across the Saharan trade routes to the south, and to the Red Sea coast of the Arabian Peninsula. The state-like religious movement had developed an intensive educational infrastructure, a functioning postal service, a viable economic base, and a formidable military force. Sayyid Ahmad al-Sharif succeeded to leadership of the movement in 1902. In 1911, when Italy declared war and began to occupy Libya, local tribal groups including the Sanusiyya were mobilized to resist the invasion by Ottoman officers such as Enver Bey and Mustafa Kemal, though these military advisors and Ottoman material support was withdrawn in 1912 due to the outbreak of the Balkan War. The Italians subsequently made headway in Tripolitania and the Fezzan but not in eastern Libya, where Sayyid Ahmad and his Sanusi forces defended the autonomy of their core Cyrenaican strongholds.

With the outbreak of the war in 1914, the Sanussi’s military potential in the southern Mediterranean theater became strategically important. Through the summer of 1915, British officers in the Egyptian coast guard at Sollum maintained cordial relations with Sayyid Ahmad, encamped a few miles across the border, and Sir John Maxwell, British commander of forces in Egypt, carried out an extensive correspondence with him attempting to maintain Sanusi neutrality. From the other side, German agents, including Otto Mannesman (active across North Africa before and during the war), and Ottoman advisors including Nuri Pasha (Enver Pasha’s brother), Jafar Bey al-Askari (an officer from Baghdad), and Sulayman al-Barani (a Libyan Ottoman officer) were on sight within or near the Sanusi camp and pressuring Sayyid Ahmad to act on the sultan’s declaration of jihad issued in December 1914 against the Allies by attacking the British to his east.

Like multiple other Arab civilian and military actors caught up in the war, Sayyid Ahmad faced strategic and emotional dilemmas in determining whether to support one side or another or to try to remain neutral. In practical terms, the Sanusis were caught between the Italians in the west (though they had been pushed back to coastal enclaves by local resistance during the first months of the war), French expansion in the Sahara to the south, and the British in Egypt to the east. His supply lines came through Egypt, as did increasing amounts of aid during the war, but the Ottomans and Germans had begun to land military equipment and deliver to the coast, using submarines and boats.  Jafar al-Askari completed two daring supply runs from Greece and from Lebanon through the Allied blockade bringing boat loads of materiel. Sayyid Ahmad carefully balanced a neutral position between the British and the Ottomans through the summer of 1915, but the official entry of Italy on the side of Allies in June and Ottoman successes at Gallipoli began to sway him towards action.

It was Nuri Pasha’s unilateral attack in September 1915 on Sidi Barrani, 40 km across the border, that finally drew Sayyid Ahmed the Sanussis into an active military campaign on the coast and the interior oases of Egypt’s Western Desert. That fall, the British withdrew from outlying posts including Al-Sallum on the coasts, and Sanusi forces under the command of Nuri Pasha and Jafar al-Askari advanced to threaten Marsah Matruh, 100 km inside Egypt, before the British-Egyptian forces mounted a counter-offensive and began to push them back.  They decisively defeated the Sanusi forces at the Battle of ‘Aqaqir on 26 February 1916, and took their injured primary commander, Jafar al-Askari, to Cairo as prisoner (he later joined Faysal to command the regular troops in the Arab Revolt and play a prominent role in the founding of the Iraqi state). By March, the Sanusi troops on the coast had been pushed back across the border into Cyrenaica.

Sayyid Ahmad and his forces withdrew south to Egypt’s western desert oases, including Dakhla and Siwa. In February 1916, the British engaged and defeated Sanusi forces at Siwa, but Sayyid Ahmad was able to escape west to Jaghbub.  That spring, Sayyid Ahmad and his nephew Sayyid Muhammad Idriss nominally divided the leadership of the Sanusiyya, with the former claiming the spiritual and the latter the political and military. Beginning in the summer of 1916, Sayyid Idriss (who after World War II would be independent Libya’s first king) engaged in sporadic negotiations with the British and Italians, finally signing the a treaty at Akramah in April 1917. 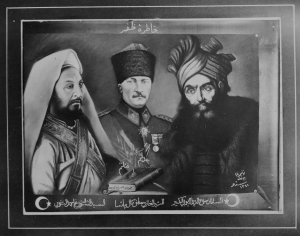 Sayyid Ahmad left Cyrenaica in August 1918 on a German U-boat and went from Trieste to Istanbul, where he was given a ministerial position. After the war, he supported Mustafa Kemal Pasha and was sent as an emissary in the early 1920s to negotiate with Arab tribes on the Turko-French front in southeastern Anatolia. In 1924, he departed for Damascus but moved on to the Hejaz because the French would not let him stay, He died a decade later, in 1933, living in Medina.

In terms of war objectives, the impact of the Sanusi operations against the British, compared to the Arab Revolt in the Hejaz against the Ottomans, was limited. The Sansusis received limited material supplies (some artillery and machine guns) and advisorial support from the Ottomans and the Germans, like Faisal and his forces did from the British. But, they did not have the Ottoman equivalent of Allenby’s regular forces advancing in 1917 as a separate prong of attack, air support, or sustainable supplies lines from their rear.  After the war, however, the Sanusis, like the Hashemites and the Arab army officer core developed during the war (which included Jafar al-Askari, who played such a prominent role in both revolts), did continue to play a considerable role in shaping the postwar period. In the 1920s, Omar al-Mokhtar coordinated a remarkably successful sanusi resistance against Italian attempts at complete military conquest in Cyrenaica that was only quelled in the early 1930s. And, Sayyid Idriss, who replaced Sayyid Ahmad as the Sanusi leader, emerged after World War II, with British backing, as the first sovereign of independent Libya, reigning as king from 1951 until his ouster in 1969 by Colonel Muammar Qhadafi.