In Search of the Relics of War: From the American Colony in Jerusalem to the Red Cross Museum in Washington, DC

This search began when I came across a curious letter from 1922 archived at the Library of Congress. In the document, Ms. Irene M. Givenwilson, first curator of the National Red Cross Museum, expressed her appreciation to Mrs. Bertha Spafford Vester of the American Colony in Jerusalem for the generous gift of several boxes containing “battered and shell torn war relics.” (1)  Mrs. Vester had painstakingly catalogued World War I artifacts and provided an illuminating caption for display in the museum’s vitrines. Ms. Givenwilson, in turn, indicated her intention to include this material with others from Jerusalem and Palestine already in the institution’s possession. There is good reason to believe her wishes were carried through and that museum patrons had an opportunity to closely examine the items. However, the exact nature of these articles and what happened to them in the course of the past century remains a mystery. 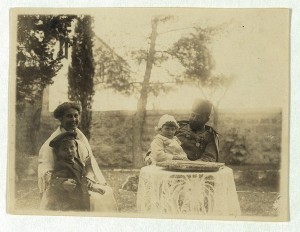 The American Red Cross established a museum in 1919 at its Washington DC headquarters to edify the public on its services and to preserve “a collection of interesting material used on the fields of mercy throughout the world.” (2) To this end, the museum committee solicited objects of historical value from individuals and sister organizations alike. At a time when collecting bodies such as the Imperial War Museum (inaugurated in 1917) in London had already crafted policies and accumulated significant materials related to World War I, the American Red Cross Museum was one of the first in the United States to embark on this mission. By December 1922, the museum had acquired donations from many international contributors. While initial acquisitions mostly focused on the agency’s services in France and other European theaters of World War I, some sections of “unusual interest” included materials from Palestine and Jerusalem. (3) 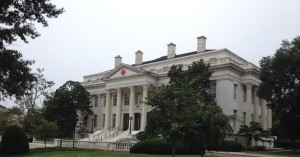 For a number of years, the exhibits were situated in the basement of the main building. Later they found a semi-permanent home in an adjacent structure dedicated to women who served in the Great War. In the early 2000s, the Red Cross decided to close the museum and shifted most of its contents to the National Archives. Documents on domestic activities, publications, funding drives, blood donation campaign posters, and collaborations with the organization’s global counterparts are fairly easy to locate. Information on the museum, its collections, and its operations is quite sparse. 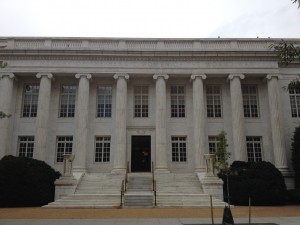 Exhibit plans in museum brochures from 1921 and 1926 clearly identify the location of war relics amongst the objects on display, but the American Colony is not specifically mentioned. One highlight from the Middle East (not part of Mrs. Vester’s contribution) was a Red Cross Flag, which had been draped on the tomb of Christ in Jerusalem and blessed by the Patriarch. Given the museum’s charter to seek documents, maps, photographs, uniforms, medals, equipment, and other items demonstrating the extent of the Red Cross’ (primarily) and other agencies’ humanitarian work during the war, one can only speculate on the nature of materials received from the American Colony. 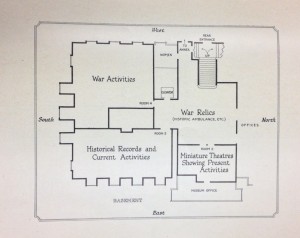 Plan of the Museum from 1926 indicating space for War Relics

In 1881, Horatio and Anna Spafford from Chicago, Illinois founded a Christian utopian community in Jerusalem. Due to their philanthropic mission, which was non-discriminatory especially regarding ethnicity or creed, the community gained international prestige and was popularly known as the American Colony. Members also used photography and written accounts to record cultural, socio-political, and humanitarian activities in the region. During World War I, the Colony operated a hospital, an orphanage, and soup kitchens, providing desperately needed relief to the war-ravaged local population. 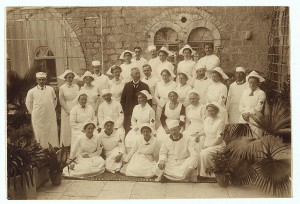 The Colony’s involvement in aid efforts for those directly affected by the war makes finding and analyzing its gift to the Red Cross Museum all the more relevant. Museums are often heralded as preservers of cultural memory. In this capacity, they elevate the significance of any object merely through acts of collection and display. Conversely, they can also silence voices and undermine value through deaccessioning policies or through accidental loss. It is unclear exactly what happened, but if Mrs. Vester’s gift was still accessible, what new light might it shed on the people and the tragedies of the time? What message did its contents carry back to the largely isolated populace of the United States? Whose cultural memory did they represent? As memories rapidly faded and perceptions of the war altered, what new meanings would the objects have accumulated? By tracing the history of such artifacts, one could perhaps piece together a more complete picture of the human experience of war in the Middle East.

(1) Letter from Irene M. Givenwilson to Mrs. Bertha Spafford Vester can be accessed online at the LOC.

(2) As described in the August 18, 1919 (Volume II) issue of the American Red Cross’ Atlantic Division newsletter.