Searching for Gurkhas in World War I 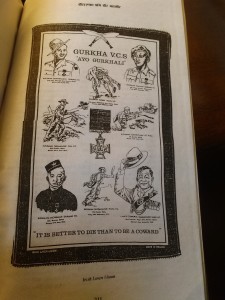 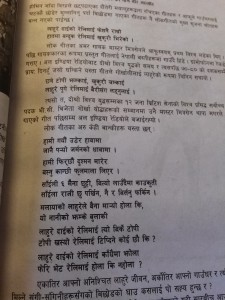 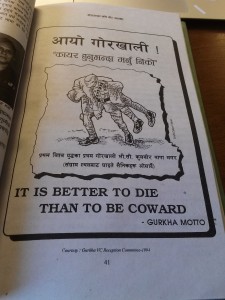 Fig. 3: Invitation card for a Gurkha memorial/honoring ceremony in 1994 in Nepal.

While reviewing books on Gurkhas at the Library of Congress, I found an image of a tea towel on which there were pictures of a series of Nepali recipients of the Victoria Cross (see Fig. 1). The caption briefly said “Courtesy of the Irish Linen Union”, with no other information about why and how a group of Nepali soldiers were represented in this tea towel. I did a bit of research and found out that one of the soldiers, Kulbir Thapa Magar, was the first-ever recipient of the Victoria Cross, Britain’s highest military honor.

On 25 September, 1915, Thapa Magar, a young man from Palpa in Western Nepal was fighting as part of the British Indian Army in France. He was a rifleman in 2/3 Gurkha Rifles. During the fighting, he was injured. He was making his way back to behind his own lines, when he saw (or heard) a wounded British officer. He stopped and carried this officer to safe territory. Then, he went back to rescue two other Gurkhas and carried them further into safety before going back to retrieve the first man again and take him into safety. During this time, he was shot at by the Germans but managed to take everyone to safety. For these actions, he received his Victoria Cross, though details of when he received it are scarce. After France, he went to Egypt and returned to India with the other Gurkhas after the end of that conflict. He retired and went back to Nepal, where he died aged 68 in 1956.

Gurkha soldiers were in action in different parts of the world in World War One (WWI). In Gallipoli, their name became part of the geographical landscape (if looked at from the perspective of the British/Gurkhas) when one of the “bluffs” they were briefly able to capture was renamed Gurkha bluff. This brings up a question about naming and labels: the term “Gurkha bluff”, which is found in British military documents, is obviously not a general term used by people of (and in) the region. Using it to describe this particular geographical landmark says something about the standpoint of the speaker (and writer). That labels are not neutral and the practices of labeling are political moves is not anything new to report. However, it is worth pointing out that ‘the Gurkha’ himself (and it is mostly him-self) is mainly a figure of the Western imagination as it stands now since much of what has been written of and about Gurkhas have been from Western military personnel or writers. The brave, loyal, sacrificial Gurkha who unquestioningly fights and dies for King/Queen and country. This is the narrative that is found in British tales of ‘the Gurkha’. Such a narrative leaves out why Gurkhas joined the British Army, why they stayed (and still stay). It generally leaves out voices of the Gurkhas themselves.

A former Gurkhas says he wanted to become a “lahurey” because women in the villages preferred lahureys. “’That woman is lucky, she’s married to a lahurey’, people used to say”, he writes (Magar, 2000: 52). He further describes how the uniformed and booted lahureys walked around the villages, smoking cigarettes and generally acting (being) cool. Seeing these men made the young men want to join up and become lahureys too (Magar, 2000: 52). So what is a lahurey? In Nepali, young men who go overseas are called lahureys. Previously, this meant those who joined the British Indian (and later British and Indian) Armies. Nowadays, the military meaning remains and is central, but people sometimes also use lahurey to refer to men who go to work overseas—the thousands who leave daily to work in various parts of the Middle East, for example. There are folk songs about lahureys and one of Nepal’s most famous films—a story about the Gurkhas– is called lahurey. So why not “Gurkha”? In Nepali, the word that is used is “Gorkhali”, not “Gurkha” and it has become synonymous (or even more recognizable) than “Nepali” in many parts of the world. Gurkha veterans have said how folks overseas recognize them as “Gorkhali” rather than “Nepali”. A “battle cry” of the Gurkhas is: “Ayo Gorkhali!”, which basically means “The Gorkhalis are coming” (or “The Gorkhalis are here”; Ayo has both meanings).

Let’s now go back to the gentleman who started this little tale: Kulbir Thapa Magar. Thapa Magar’s story—what little we know of it—is not uncommon. After all, there were over 200,000 Gurkha soldiers who fought in WWI. They were in all theatres of the war, from France to Palestine and Egypt. An estimated 5,000 died and 15,000 were injured. And, yet, we don’t know much about these men. Descriptions of Thapa Magar’s actions come from the London Gazette (where it is mentioned he received a Victoria Cross) but we still don’t know what he did elsewhere, where he went after the war, how he was perceived once he went back to Nepal (he died in Nepal) and what he himself thought about being part of “the Great War”. We will most likely never know the answers to these questions about Nepal’s WWI veterans. We do know, from a few recordings of Prisoners of Wars in German camps, that many of them yearned to return home; We know that the Gurkhas were not used to the winter weather in France (where they were first sent) and many died of cold and diseases. But we don’t know much else. And we might never know. However, traces remain and it is these traces that are worth searching for an excavating when writing about Nepali Gurkhas in WWI: A few issues to consider:

1. Tracing the Gurkhas in texts, songs, voices, and documents: Gurkhas have been represented, often in Western military imaginations, but there is less information about local, indigenous ways of describing them. Stories, novels, films, songs are sources which can access the local popular imaginations about and of Gurkhas. They help us recover the local meanings of ‘the Gurkha’. This is still, of course, mythmaking but local myths and narratives might be useful to challenge notions of unquestioning obedience and warlike nature that exist in the Western imaginations about the Gurkhas. And, of course, for the many surviving Gurkhas, their own voices and viewpoints could be sought and their stories told.

2. A history of the present: While the sources for WWI are rare, they most likely still exist in village stories and memories, official documents, maybe discharge letters and so on. These sources provide the potential of knowing something different about the participation of these 200,000 Gurkhas in WWI. Did the close proximity to each other in warfare change British-Gurkhas relations? Their conceptualizations of each other? What about differing narratives about war and fighting? Were there similarities in how soldiers missed “home”? Do we have tales of the ones who were left behind and whose sons/brothers/husbands/fathers went off to fight? These are questions which remain key today, and the cultural memories within villages in Nepal from where these soldiers went off to fight could be useful in addressing them.

3. The invisibilities of the Gurkhas from their own stories not just points towards asking (and exploring) what these invisibilities indicate in terms of our knowledge of WWI and wars in general, but also provide grounds for possibly studying and tracing out subaltern transnational connections. Such connections may serve to question dominant modes of representing and studying “history” and individuals and groups therein. Let’s return to our tea towel then at the conclusion: it was a towel created by the Irish Linen Union. Why was this particular towel created? What are the techniques used here to memorialize Gurkhas? What modes of visibility (and under whose gaze) are the Gurkhas of these tea towels? The tea towel might be a material trace wherein subaltern connections between Ireland and Nepal might be traced out. Research on indigenous peoples in WWI and on Indian soldiers also connects to these themes of understanding subaltern lives.

Fig. 3 shows how the picture travelled—it can be now be seen on an invitation celebrating the Gurkhas in 1994 (Magar, 2000: 31). The text in Nepali reads, on the top: “Ayo Gorkhali” (Here come the Gorkhalis), below that: “Kayar hunubhanda marnu niko” (It’s better to die than to be a coward). The text below the picture of Kulbir Thapa Magar (the same one as in the Irish Linen Union tea towel) says (in Nepali): “First World War’s First Gorkhali V.C. Kulbir Thapa Magar, (carrying wounded soldiers from the battlefield)”. Thus, this one image and its ‘migrations’ help open up discussions of representations of subaltern characters and also to note how specific representations get used in different contexts and (might) make sense differently.

Note: This entry would not be possible without the help of the librarians are the Asian Reading Room of the Library of Congress, Washington DC. I am indebted to their assistance.

The page with the picture of the tea towel (Fig. 1) is from Birharuko pani bir mahabir (Braver than the brave), p. 211 by Pradeep Thapa Magar (Publisher: Jilla Memorial Foundation, Kathmandu, Nepal, 2000). Fig. 2 is a popular Nepali folk song, based on the experiences of Gurkhas in WWI. That figure is also from Magar, 2000 as are references in text.

For more information on Gurkhas in WWI, please see:

For a painting of Kulbir Thapa Magar, painted by a well-known British painter (though the caption has the “subject period” as “Second World War”), see:

Information about Gurkhas in WWI can also be found at: http://www.ayo-gorkhali.org/index.php/en/timeline/soldiers-of-empire/1914-18-world-war-i/

This book: Franziska Roy, Heike Liebau and Ravi Ahuja ed., When the War Began We Heard of Several Kings: South Asian Prisoners in World War I Germany (2011) includes a CD with some of the voices from POWs.

David Omissi’s Indian Voices of the Great War, 1914-1918 (Palgrave, 1999) has, as it says, a collection of censored letters and is most likely one of the largest collections of “subaltern voices” of WWI.

Finally, Lionel Caplan’s Warrior Gentlemen: ‘Gurkhas’ in the Western Imagination (Berghahn books, 1995), though not specifically focusing on WWI, describes some of the ways in which ‘the Gurkha’ has been understood.