With the outbreak of the First World War, Tunisia, under the French Protectorate since 1881, was quickly mobilized to serve French war efforts. While nearly 70,000 Tunisians were conscripted and sent to work and fight on the Western Front, Protectorate authorities clamped down upon traditional outlets of dissent and reformism back in Tunisia [1]. By stiffening the state of emergency in place since anti-colonial unrest in 1912, French police hoped to ensure a quiescent Protectorate free from German and Ottoman jihadist and anti-colonialist propaganda.

Recent historiography on Tunisia’s experience during WWI is sparse. The studies that do exist skirt over the war years to reexamine well-established nationalist narratives of the 1920s and 30s. This is due in part to a lack of easily accessible sources. Since press outlets were banned, most of what we might learn about the social, economic, and political upheavals of the war years comes only from police surveillance records.

Travelers’ accounts can sometimes help bridge gaps such as these, even when they focus on subject matter that seems unlikely to relate closely to one’s research interests. Josephine Planter’s 1925 memoir, Book of Remembrance, or, Led by the Spirit, constitutes such a source [2]. Planter, born in Bohemia, had settled in the United States, where she converted from Catholicism to Pentecostalism. In 1912, following her spiritual calling, she embarked for Tunis with no companions and little more than the modest donation given to her by a Scandinavian Pentecostal mission in Brooklyn, NY. The second half of her memoir treats this part of her life, alternating between professions of faith (mainly direct dialogue with God, through prayers, poems, and songs) and descriptions of events surrounding her life abroad. 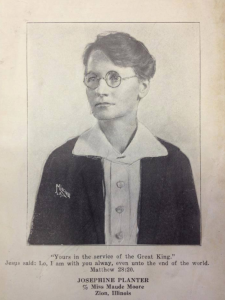 Upon the outbreak of war in August 1914, Planter’s proselytizing efforts met challenges. Though traveling from the United States, she had arrived using an Austrian passport under her original surname Slezak, and as such, French authorities deemed her an enemy subject. She spent the next few months navigating various American, Austrian, and French consulates in Tunis and Palermo, in fruitless attempts to obtain permission to continue her Pentecostal mission while in legal limbo.

Through these travails, she characterized French officials as callous and cruel, not least because they mocked her religious convictions. In response to her claim that she did not have the means to return home to the United States, they suggested, “Let your God pay your fare!” [3] Indeed, much of the language in the text resembles that of a series of trials and tribulations meant to be overcome by faith in God alone. Certainly the timely interventions by friends and friendly agents along the way cemented such an outlook.

The strains of her “persecution” became unbearable in the autumn of 1914. Planter considered returning to New York while in Palermo:

…So I sent a telegram to the Scandinavian mission in Brooklyn, to see if they would help me on my way to America. I received the money, and three times I went to a steamer to sail to New York, when God spoke to me. He lifted up His finger toward me saying: “Take heed that you do not return. You must go back to Africa,” and He showed me a coming telegram. [4]

The telegram had arrived from a “Brother in Pasadena” who had obtained for Planter a certificate of protection from the French consul in Los Angeles. Her conviction steadied, she returned to Tunis, writing, “The Lord showed me that He would land me.”

Her temporary fortune would end here. Upon her return to Tunis in December 1914, French authorities immediately recognized her. The police commissary, reading her certificate of protection, said only, “We will protect you by putting you in prison” [5]. Planter would spend the next few months in French prisons in Tunis and Algiers, before being sent to Marseille and then Geneva for her eventual deportation to the United States. Conditions in the prisons were grim. She was placed for a time in a cell with three “fallen” women, “murderers” who spat and hurled abuse at her, plucked her hair, and insulted her religion [6]. Food was scarce and infested with insects, and bedding was usually a cold, damp floor. Within a few weeks, her “skin had turned grey and was covered as with scales” [7].

Planter’s account, despite its sometimes dizzying spiritual narrative, offers some details of much interest to a study of French measures to secure their Tunisian home front during the war. Particularly following the Ottoman call for jihad against the Entente powers in November of 1914, French authorities became obsessed with intercepting enemy propaganda intended to incite Muslim subjects to overthrow their colonial overlords [8]. Through Planter’s memoir, we can glean some hints about how Protectorate police pursued, interacted with, and processed individuals deemed a threat to public security.

Confusion and ambivalence characterized the question of who would be deemed an enemy subject in Tunisia. Certainly Planter might have simply fallen prey to blanket orders to detain holders of Austrian or German passports. We should also consider the possibility that colonial authorities in the Middle East and North Africa did not always look kindly upon missionaries, who were often blamed for angering local Muslims and skirting the law by invoking extraterritorial privileges [9]. Moreover, a young woman operating with Planter’s independence (she arrived alone, lived alone, and enjoyed no institutional infrastructure) might also have posed a threat to the gendered hierarchies undergirding the French mission civilisatrice [10].

On the other hand, although Planter characterized French authorities as rude and insensitive, her recollections show that she was actually afforded a fair amount of lenience in the months between the outbreak of war and her eventual imprisonment. Her appeals to various French officials were often given lengthy consideration, and in many cases, she won temporary protection or amnesty while authorities deliberated on her fate. That several officials vouched for her speaks to the complicated layers of jurisdiction and citizenship at play here: an Austrian-born American missionary, working in France’s Tunisian Protectorate, was, in the first year of the war, connected to two opposing belligerents and a neutral power. Such an intersection is by no means unheard of: some of the best recent studies of Tunisia place it at the crossroads of long-standing, vibrant, and complex Mediterranean networks of competing and overlapping jurisdictions. Indeed, Planter’s efforts to avoid deportation or imprisonment might have constituted an early 20th-century example of what Julia Clancy-Smith has called the “forum shopping” practiced by Tunisian, Maltese, Italian and other subaltern groups to secure the best possible resolution to their struggles [11].

Despite the difficulties Josephine Planter experienced as a result of the outbreak of conflict in 1914, she expressed little interest in the war itself: “I had never read a newspaper in my life, nor cared to look into it, and I knew nothing about the war” [12]. Here, then, we see a woman charging bravely into the unknown – “poor dark lost North Africa,” in her words – with little evident planning, support, or resources [13]. Yet Planter’s remarkable Book of Remembrance, while not forthcoming with many details about the experience of Tunisians during the war, opens up some important questions for further research. What was the political atmosphere in Tunis at the outbreak of war, particularly with regard to Protectorate authorities’ concern for German and Austrian propaganda and espionage? What practices did French colonial authorities use to ensure stability? How did the war effect interlopers’ navigations of diplomatic, religious, and police agencies and other more informal networks? What did this process reveal about the fluidity of belonging and identity during a war that precipitated a massive exchange of populations across the Mediterranean, and indeed, around the world?

[9] For example, see Beth Baron, The Orphan Scandal: Christian Missionaries and the Rise of the Muslim Brotherhood (Stanford University Press, 2014).