Recounting the Past, Shaping the Future: Ladino Haggadot of the War in Occupied Constantinople 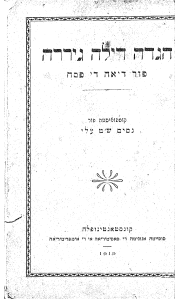 The occupation of Constantinople by Entente forces after the signing of the Mudros Armistice on October 30, 1918 threw the Ottoman capital into disarray. Greek Orthodox and Armenian residents of the city enthusiastically welcomed Allied forces, waving Greek flags from balconies that lined the Grand Rue de Pera leading from Taksim Square. The strong presence of Entente forces in the Ottoman capital upended power dynamics between Muslims and non-Muslims; the latter’s public visibility during the occupation would stand in marked contrast to the later enforced silencing of minorities in the early years of the Turkish Republic.[i] In contrast to the Greek Orthodox and Armenian examples, the reactions of Constantinople’s Jews to the presence of occupying forces in Constantinople and to the capitulation of the Ottoman Empire have often been presumed to be negative.[ii] Indeed, the opposition of some Ottoman Jews to Ottoman projects and programs, including those of World War I, have been largely overlooked, indicative of the successes of Jewish leaders’ attempts to mark Ottoman Jews as the faithful and uncritical “model minority” of the Ottoman state.[iii] 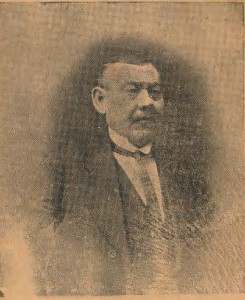 Several Ladino texts produced in the immediate wake of Mudros, however, reveal Constantinopolitan Jews’ discontent with World War I, whether of those in the Ottoman military or on the home front, and their diverse responses to a future made uncertain by the outcome of the Great War. Several of these texts— Haggadah dela Gerra (Constantinople: Sosyeta Anonima de Papeteria i de Impremeria, 1919), composed by Nissim Shem-Tov ‘Eli, and Haggadah dela Gerra Jeneral (Constantinople: Impremeria del Jugeton, 1920) by Elia Karmona, editor of the long-running satirical journal El Jugeton (1909-1930) – follow the structure of the Haggadah, the ritualized retelling of the story of the Israelites’ exodus from Egypt recounted yearly at Passover. Beginning in the late 19th century, Ottoman Jews published Ladino parodies of the Haggadah that commented on social and political topics ranging from critiques of the Jewish nouveau riche and Zionism to the Balkan Wars and World War I.[iv] While these can be understood as attempts to produce collective memories, shape collective identity, or to address collective trauma,[v] the Haggadot about World War I also offer glimpses of the Constantinopolitan Jewish home front, the discomforts of military service, and the ways in which the two authors sought to place themselves and their community in the post-war world.

Just as the traditional Haggadah recounts the biblical plagues in Egypt, the Haggadot of World War I proffered the plagues that “the residents of Turkey” and “the people of Constantinople” had suffered during the war years. In ‘Eli’s text, these range from lice and mange to hailstorms of bombs and darkness due to lack of gas, to which Karmona adds the proliferation of orphans, skyrocketing costs of goods, exanthematous fever, and the Spanish influenza, topics which the latter also addresses in a novel set in Constantinople during World War I, Los Dos Ermanikos (Constantinople: Impremeria del Jugeton, 5681 [1921-1922]). ‘Eli’s text in particular highlights the aural dissonance of war—the sound of the drum beating night and day that tormented mobilized men, and the roar of enemy airplanes prompting civilians to flee to the hills. Both texts emphasize civilian anguish from the requisition of foodstuffs and animals, the “bread of vesika [ration-card]” cut with chaff standing in for the “bread of affliction” that the Israelites ate on their exodus from Egypt. Similarly, both highlight the cold, hunger, and backbreaking work that those mobilized into labor battalions—as was the case for most religious minorities—suffered. Karmona alludes to the practice among those in labor battalions of making recourse to a “known” doctor who could grant them a change of environment [in Ladino, teptil hava] for several months, allowing them to avoid service; likewise, he cautions the draft dodger hiding in the attic [tavan arasi] not to emerge from his corner lest he be imprisoned.

The authors’ divergent views on what the post-war future holds become apparent in their treatment of the war and their views on who, beyond God, is ultimately responsible for salvation from the hardship of this war. Both excoriate Enver Pasha and Germany. While Karmona explicitly mentions U.S. President Wilson’s words in favor of world peace, ‘Ali’s text favors Wilsonian plans for national self-determination. In ‘Ali’s text, the Allied forces serve as the traditional Haggadic parallel to God leading the Israelites out of Egypt, rescuing the Jew, the Greek, the Armenian, and others “who suffer from the power of Turkey,” and making for them homelands over which they will have dominion. Indeed, in ‘Ali’s text, the rewriting of the Passover song Dayenu [It would have been enough] ends with a reference to the establishment of a Jewish governing body in Palestine— “if the [victor] made us patrons of Eretz Israel and had not permitted us to form a chamber, it would have been enough for us.” But whereas in ‘Ali’s text, the Ottoman Empire is clearly defunct and the future of Ottoman Jews lies in Palestine as a result of the benevolent intervention of the Entente, Karmona’s text offers a future in which the Ottoman Empire persists. Though he casts Ottoman actions in World War I as the result of the Ottoman Triumverate’s desire to “destroy the people,” his Haggadah ends with calling for praise of Sultan Mehmed VI Vahidettin, “who desired peace and brought it” together with the Allies.  With no mention of Palestine or self-determination and no distinction between the various religious and ethnic components of Ottoman society, Karmona leaves open the possibility of an Ottoman future in which there would be “equality among the people.” These texts produced in the immediate post-war period, as Constantinople writhed in uncertainty, cast light on negative Jewish perceptions of World War I and the Ottoman leadership, and reveal the authors’ divergent positioning for their community amidst an uncertain future.

[i] See Lerna Ekmekçioğlu, “Improvising Turkishness; Being Armenian in post-Ottoman Istanbul (1918-1933),” (Ph.D. Diss., New York University, 2010); Rıfat Bali, “The Alternative Way to Come to Terms with the Past. Those Who Try to Forget: Turkey’s Jewish Minority.”