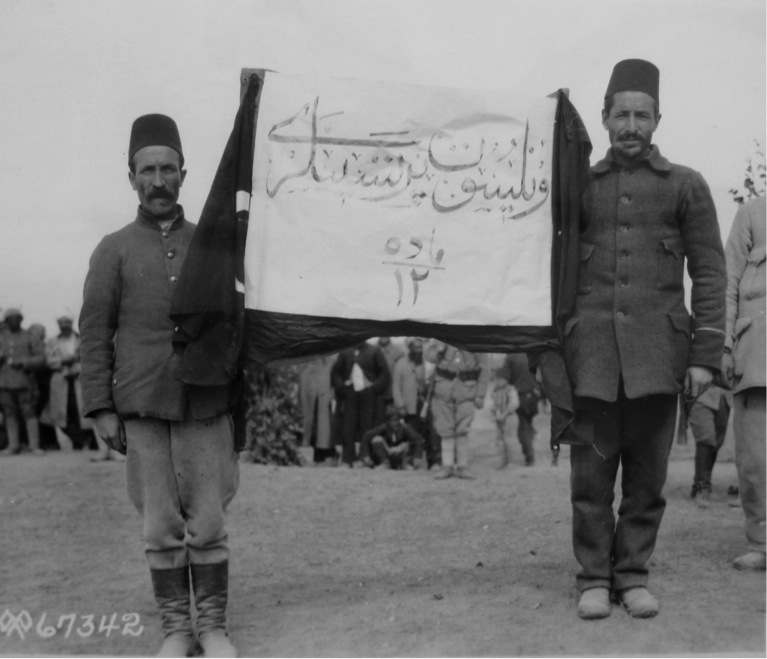 On October 19, 1918, just days before the armistice negotiations, İzzet Paşa, then Grand Vizier, announced to the Ottoman Parliament that the imperial government accepted Wilson’s 14 Points as the foundation of the peace and the postwar order. The 12th Point, which concerned the Ottoman Empire, promised secure sovereignty for the “Turkish portions” of the Ottoman Empire and offered the “opportunity of autonomous development” to the other nationalities of the Empire. [2] İzzet argued that peace according to Wilsonian principles would secure equality in international relations, assure “national sovereignty” and preserve the empire by providing administrative autonomy for the Arab provinces – though he did not address the question of autonomy for the other nationalities in the empire. He noted, “In order to maintain the connection to the Caliphate and the Sultanate we will work to solve the question of the Arab provinces by assuring an autonomy in accordance with national desires and wishes.” [3]

While nearly all of the deputies approved the Grand Vizier’s proposal to pursue peace according to Wilson’s 14 Points, the announcement occasioned a discussion on the future constitution of the empire. The deputy from Aleppo, Artin Boşgezenyen, expressed concern that the only known model for administrative autonomy along national lines was the Habsburg Empire, which itself struggled to maintain its existence. Another deputy countered that Arab autonomy would not lead to partition and appealed to Islam as the true bond between “the Arab and Turkish nations.” [4] The minor tension between nation and empire expressed within the Ottoman Parliament occurred on a far larger scale during the Armistice and at the Paris Peace Conference. Publicists seized upon key phrases within Wilson’s 12th Point to further national and imperial ambitions. The battle for public opinion in Paris, concerning the future of the Ottoman Empire, was waged upon particular understandings of what constituted the “Turkish portion” of the empire and the meaning of “autonomous development.”

Petitioners, as much as the Entente conference delegates, drew heavily upon population statistics to buttress arguments about the future of the Ottoman domains. Representing Greece at the Paris Peace Conference, Eleftherios Venizelos relied upon Article 12 to support Greek territorial claims. He proposed that extensive parts of the Ottoman Empire, including Istanbul, should fall under either direct Greek control or be established as Greek autonomous province: “The article already cited from the programme of President Wilson governs also the solution of the problem of Asia Minor: Ottoman sovereignty must, from now onwards, be limited to the interior of the country, where the Turkish element is predominant.” Venizelos, himself a lawyer and a once Ottoman subject from autonomous Crete, argued that the principle of self-determination should extend to populations granted autonomy within the reconstituted Ottoman state. Instead of living in an autonomous province, they should be allowed to join “an already existing state of the same nationality.” [5]

In a series of letters and pamphlets produced by members of the Ottoman Liberal Party based in Geneva, Ottoman petitioners continued to invoke Wilson’s Article 12 as the basis of the postwar order – even after it became clear that the Allied powers would partition the Ottoman Empire via European and potentially American mandates. Ahmed Reşid Paşa [Rey], the former Interior Minister and governor to Monastir, Aleppo and Aydın – all prewar hotspots from the perspective of national questions – appealed to Wilson directly after reading about the planned mandates for the Arab provinces, Armenia and a Turkish successor state. Ahmed Reşid viewed “Wilsonian principles” in much the same way as İzzet Paşa. Referring to the longstanding debate among factions within the early Committee of Union and Progress, he noted that Ottoman liberals had welcomed Wilson’s promise of autonomous administration in Article 12, as it accorded with decentralized administrative ideas among Ottoman Liberals before the war: “The liberal Turkish party, whom I have the honour to represent, having for a very long time, had as their own idea, the liberation of the ancient Empire into a Confederation…” The mandate idea, according to Ahmed Reşid, cut against Wilsonian principles. Mandates abrogated the internal and external sovereignty promised by Article 12, violated the armistice and provided a legal justification for European imperial annexation of Ottoman territory. [6]

In a later pamphlet, the “League for the Defense of Ottoman Rights” appealed to national self-determination and condemned the mandate system, but the geographical contours of the future empire no longer included the Arab provinces in Syria. Using the expressions “Ottoman Empire” and “Turkish nation” interchangeably, the authors argued that the empire would accept foreign support in the form of aid and expertise, but rejected any accompanying loss of sovereignty as “at odds with point 12 of Mr. Wilson’s program.” The League for the Defense of Ottoman Rights warned that “if the Peace Conference decided to divide the territories of the Near East inhabited by Muslim peoples, who have never been subjected to domination and who have always governed themselves, and if the Peace Conference, with the label “mandate,” wants to place those territories under the domination of foreign nations, they must impose this decision on the people by blood and fire.” The Ottoman Empire would ensure the rights of non-Muslim minorities, but “would never consent to alienate its independence nor yield a bit of its national patrimony to either a foreign power or to one of the ethnic minorities in its midst.” The League for the Defense of Ottoman Rights appealed to Wilson’s 14 points in order to claim secure sovereignty for the Ottoman state, whereas “autonomous development” would be nothing more that minority rights protected by the Constitution. [7]

The American Committee for Armenian and Syrian Relief, later the Near Eastern Foundation, rejected Wilson’s 12th point as the basis of the peace. In an undated report, they proposed a large federated state under Great Power protection, corresponding to the existing geographical boundaries of the Ottoman Empire. Wilson’s idea of “autonomous development” threatened to splinter the reorganized state along national and religious lines. The empire would have to be reconfigured, they argued, “without the Turkish political class.” The report claimed that Wilson’s 12 point would create a series of autonomous provinces and “each political unit, animated by racial antipathies and desire for self-aggrandizement would tend to bend its energies not to the betterment of its people and the commercial and industrial development of the country, but rather to the building up of the military establishments and the perpetuation of racial and religious jealousies.” In short, Wilson’s language of national minorities and majorities engaged in a dangerous form of population politics that would undermine any viable future state. [8]

Representatives of the various potential successor nations of the Ottoman Empire, along with the Ottoman government, appealed to Wilson’s 12th Point in order to support overlapping territorial and political claims. Throughout the period of the Paris Peace Conference, such competing political claims were marked by a distinct tension between nation and empire. Establishing national majorities and national minorities within the Ottoman domains produced an abundance of warring population statistics, but these numbers were not necessarily always aimed at constructing a national state. A number of possible political configurations were imagined. Whether a Greater Greece or a Turkish-Arab empire or a Turkish state in Anatolia, the final shape of the Middle East was not decided until well after the end of the war. Whatever Wilson meant by Article 12, a broad range of nationalists and imperialists inside and outside of the Ottoman Empire appropriated his language for their own ends.

[2] Wilson’s 12th point provides a “secure sovereignty” for the Turkish parts of the Ottoman Empire and offered the “opportunity of autonomous development” to the other nationalities of the Empire: “The Turkish portion of the present Ottoman Empire should be assured a secure sovereignty, but the other nationalities which are now under Turkish rule should be assured an undoubted security of life and an absolutely unmolested opportunity of autonomous development, and the Dardanelles should be permanently opened as a free passage to the ships and commerce of all nations under international guarantees.” Woodrow Wilson, “Address to the Joint Session of Congress on the Conditions of Peace,” January, 8, 1918. Yale, The Avalon Project: Documents in Law, History and Diplomacy, http://avalon.law.yale.edu/20th_century/wilson14.asp.

[4] Ibid., p. 30-31. The enthusiasm for Wilson’s 14 Points in the Ottoman Empire was not confined to the government. In December of 1918, a group of some of the most prominent Ottoman intellectuals, journalists and editors founded the “Wilsonian Principles Society” in Istanbul. See Cemil Aydın, The Politics of Anti-Westernism in Asia: Visions of World Order in Pan-Islamic and Pan-Asian Thought, (New York: Columbia University Press, 2007), p. 128-141 and Mehmet Şahingöz and Vahdet Keleşyılmaz, “Milli Mücadele Dönemi Türk Basınında Wilson Prensipleri,” Atatürk Araştırma Mekezi Dergesi, 7, 35(July/Temmuz 1996): 357-378.

[5] Eleutherios Venizelos, Greece before the Peace Congress of 1919, New York: American Hellenic Society, 1919, p. 15-17. A copy was included with a series of other texts on the future of the Ottoman Empire Reel L.O.C./Manuscripts/Woodrow Wilson Papers/Reel 461 – 6G.

[6] A handful of pamphlets and letters produced by the Ottoman Liberal Party can be found in the papers of General Bliss, the American Military Representative to the Supreme War Council during the Peace Conference. L.O.C./MSS13037/Tasker Howard Bliss Papers/Box 354/File “Turkish Empire April 1918-August 1919/A. Réchid (Ahmed Reşid Bey [Rey]), An Open Letter to M. W. Wilson President of the United States of America, (Geneva: Imprimerie de La Suisse, 1919), p. 10.