A Day in Adana: The Aftermath of War through the Eyes of a Youth

World War I was far from over  when Germany officially surrendered to the Entente forces on 11 November 1918. In the territories of Ottoman Empire, now a shadow of its former glorious self, the guns continued to sound in a fierce battle for self-determination. As the European colonial powers sought to divide up the territory of the multiethnic Ottoman Empire, the forces of Turkish nationalist leader Mustafa Kemal (1881-1938) fought to maintain their independence, claiming victory and announcing the establishment of a Turkish Republic in 1923. It was in the context of continued conflict that University of Michigan Professor of Archaeology Francis Willey Kelsey (1858-1927) traveled to the Near East. He was accompanied by his wife Isabelle (Mary) Badger Kelsey (1867-1944), his fifteen-year old son Easton Trowbridge Kelsey (b. 1904) and University of Michigan staff photographer George Robert Swain (1866-1947). Kelsey visited a region of the world that not only had experienced four-years of destructive war and devastating famine, but also had been the site of a genocide that cost the lives of over a million Ottoman Armenians.[1]

Francis Kelsey had instigated the “scientific” mission , among other things, to collect and purchase ancient manuscripts for research and education at the university. It was “now or never” he writes that ancient and medieval manuscripts may be purchased from “unappreciative hands” for a token price. It was now or never that Greek, Syriac, Persian and Armenian manuscripts could be easily picked up and the “possession of these, and their proper preservation, will be a gain to science of inestimable value.”[2] Besides his own field specific interest, Kelsey agreed to work with Swain to photograph “ethnic types” of Asia Minor and Syria commissioned by the Bureau of American Ethnology, and to inspect the work of the American Board of Commissioners for Foreign Missions, and in particular the work of the American Red Cross in the region. While Francis led the expedition, it is his son Easton who I am interested here. Easton kept notes, wrote many letters to friends and family and kept a diary while traveling with his father and mother through Southern Asia Minor in 1919-20. Easton’s unique diary allows us to view the aftermath of war through the observant and curious eyes of a youth socialized in a milieu of academics obsessed with studying, knowing, preserving and unearthing the ancient history of the Near East. 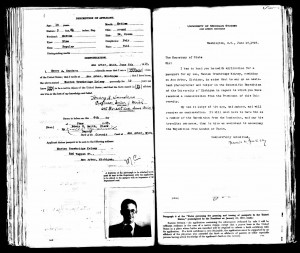 In 1919, Easton left the United States for the first time to accompany his parents on a “scientific expedition” to the Near East. According to his father, a tour de force in the field of Archaeology, Easton was “large of his age, and mature.” The short letter accompanying Easton’s passport application tells us much about Easton’s relationship to his father, who finds his son to be a responsible travel companion. But Easton was not to simply accompany his parents. Instead, he was to serve as assistant photographer and “helper in the Scientific Expedition of the University of Michigan.”

The pages below are excerpts from Easton Kelsey’s diary and provide the unique description of an American educated youth. The pages here selected are the description of one day (December 31, 1919) in the city of Adana. Besides the obvious empirical value of this diary, which is keenly observant of facts on the ground, it descriptions may be contextualized in the history of American humanitarianism and the continuities of an European Orientalist discourse aimed at representing an inferior rescuable Near East.

Easton’s description of the work of the American Committee for Relief in the Near East (ACRNE) on the ground, in particular the work of Ms. Webb who apparently had been in the Ottoman Empire for a long time and spoke the language, exposes the organization’s particular vision of the future. Ms. Webb’s house for Armenian girls was an exemplary institution of ACRNE, which would later become the Near East Relief (NER) on multiple levels. For one the fact that “native teachers” first taught the girls Armenian and English only once they had mastered their own native tongue was in line with the mission not to “Americanize” the children, since it was the organization’s goal to “fit the children for a life in this country rather than for emigration.”[3] 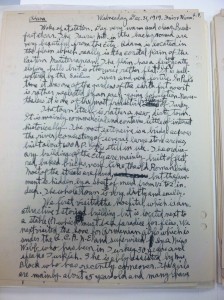 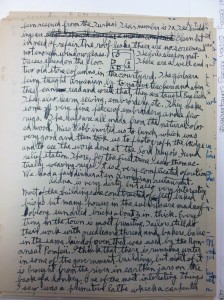 The teaching of sewing and weaving described by Easton was part of a humanitarian mission defined not only by simply aiding people in need, but rather to address the underlying cause of suffering. American philanthropists often blamed the extraordinary wartime suffering in the Middle East on the lack of a literate middle class.[4] In the postwar period, it became their mission to create such a middle class from scratch, by teaching not only elementary reading and writing but also practical skills. The project described here by Easton is an early moment in formulating the larger project of creating a “New Near East,” exemplified in the name of the monthly publication of the NER. The girls were to be taught hard work, self-discipline and a trade that would allow them not only to be self-sufficient but also become “productive” citizens.

Easton Kelsey’s diary is a fifteen –year- old’s version of the prevailing orientalist narratives of his time. His descriptions are a reflection of his socialization into a world of late-nineteenth and early twentieth century academics and archaeologists in particular who thought to map, discover, unearth, and uncover the Holy Land. Easton constantly seeks comparison to ancient history and biblical times. Ignoring its more recent history in particular that of violence, Easton is in search of ”real” history.  He finds that Adana is of little interest “historically.” The only remotely relevant site is a bridge dating to 600 AD. In general, his allusions to ancient history and biblical times highlight stagnation, backwardness and an overall lack of progress. He finds that Adana homes were built with mud bricks that resemble those used by Romans. Indeed nothing seemed to have changed since Roman times as the tailors still use simple needle and thread and bakers bake their bread in “the same kind of ovens used by the Romans in Pompeii.” It is not the grandeur of Roman temples or arenas that he found, which would have been admirable but a way of life stuck in time. The reason for this time warp in his opinion was the laziness of the people. While in “Paul’s times it was one of the gardens of the earth” Adana now is “rather neglected by an easy-going people.” The only progress that perhaps was made at one point, i.e. paved roads, was covered in two inches of mud and the city decrepit dirty and smelly. There is no word of the recent war and destruction.

The diary is a unique and rich source to be used in the classroom. It may be used to teach about Americans in the Middle East, the history of humanitarianism in the region, the representation of the Middle East in the writings of foreigners, and to highlight the continued use (and utility) of Orientalist discourse by American scholars and their protégées. A discourse “by which European culture was able to manage, and even produce the Orient” in a position of inferiority in need of “rescue” from the Turks, just as the little Armenian girls.

[1] The Young Turk government had systematically exterminated not only Armenian, but also other Christian minorities such as Assyrians and Greeks.

[4]That such a middle class existed has been long discussed by social historians of the region, such as Keith Watenpaugh. Melanie Tanielian, “Cities of Orphans: The Orphan Child as Historical Agent in Post-WWI Greater Syria,” paper presented at Annual Meeting of the Society for the History of Childhood and Youth, June 2011.