What were the consequences?

The human and environmental loss was appalling. The most immediate effects were felt at the town of Bento Rodrigues. Most residents fled the rushing waters and the local school was successfully evacuated minutes before the tailings reached the town. However, 19 people died and 75 were injured as a result of the flood, and 150 homes were destroyed. Those that did survive were left homeless and were relocated to the nearby town of Mariana. 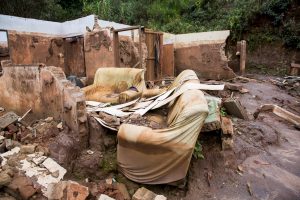 The dam collapse had the strongest impact on Bento Rodrigues, but the damage reached much farther downstream. The tailings, filled with heavy metals from the iron mine, contaminated the Rio Doce. Samarco, the company who owns the Fundão Dam, denied that the iron tailings were toxic, but a United Nations report concluded that the sludge in fact contained high levels of mercury and other heavy metals that are harmful to humans when ingested (Eisenhammer, 2015). As a result, hundreds of thousands of people lost access to their principal source of potable drinking water and became dependent on government shipments of bottled water. Land used to raise cattle and grow food was buried in mud or otherwise polluted. Krenak indigenous communities, whose descendants have long inhabited the Rio Doce Valley, were especially devastated by the dam collapse. Pollution destroyed the river’s fish stocks, which were essential to their livelihood, and made it impossible for Krenak communities to perform rituals in the river or collect materials for traditional medicinal practices (Alves and Santos, 2016). 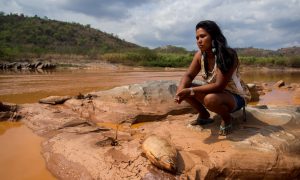 In addition to the human costs, the sludge proved damaging for the river’s fish and plant life, which were significantly reduced, and in some cases eliminated altogether. Not only did this deal the ecosystem a devastating blow it also destroyed fishing and tourist industries along river, impacting the economic life of residents far downstream from the dam collapse.

The impact of the toxic residue in the Atlantic Ocean is much harder to measure but it has had detrimental impacts on wildlife in the coastal areas surrounding the outlet of the Rio Doce. Some ecologists doubt that the river will ever recover. After viewing the damage from a helicopter, Brazilian President Dilma Rousseff remarked that the Fundão Dam collapse and the resulting contamination of the Rio Doce was possibly the biggest environmental disaster in the state of Minas Gerais, if not in the entire country’s history (Philips, 2015). 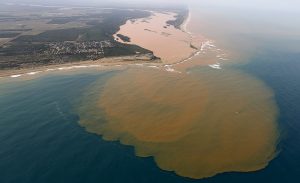 This is a big claim because Brazil, like other countries, has suffered several grave environmental disasters. When the Portuguese invaded South America in the 1500s, violence and infectious disease brought about a demographic collapse among Brazil’s indigenous inhabitants. Likewise, droughts are a persistent problem in the semi-arid Northeast. The Grande Seca (“Great Drought” in Portuguese) of 1877-1878 killed hundreds of thousands of people and forced hundreds of thousands more to migrate. Measuring the dam collapse against such disasters obscures important differences between them, like corporate responsibility in dam maintenance and government legislation designed to prevent such disasters from occurring. Regardless of how the dam collapse measures against catastrophes with such high demographic costs, it ranks as one of the worst environmental disasters in Brazil’s history. BHP Billiton and Vale put aside $5.1 billion USD for cleanup (Boadle and Eisenhammer, 2016). Some residents claim that the companies are doing a good job in making amends for the crisis and supporting efforts to rebuild. Others residents and environmental activists disagree.