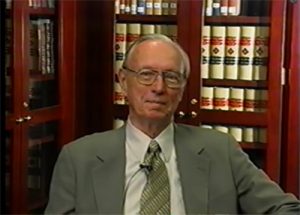 The oral history interview with Congressman John Erlenborn (1927-2005), conducted by Don Saunders in July of 2002, is now available online. In the interview, Erlenborn, who represented Illinois in the US House of Representatives from 1965-1985, recalls the controversies over the OEO during the Nixon administration, the creation of the Legal Services Corporation, and his service on the LSC Board from 1989-2001. Erlenborn, a Republican, was initially appointed by President George H.W. Bush in 1989, and re-appointed by President Bill Clinton in 1996. In addition to his work in support of legal services, Erlenborn was instrumental in the passage of the 1974 Employee Retirement Income Security Act (ERISA). In addition to the streaming file, a transcript of the interview is available for download: https://repository.library.georgetown.edu/handle/10822/711842