Dennis Groenenboom, the Executive Director of Iowa Legal Aid, spent his entire career in legal services. After obtaining is J.D. from the University of Iowa College of Law, he joined Iowa Legal Aid (then known as the Legal Services Corporation of Iowa) in 1978. Dennis worked as a staff attorney, managing attorney, senior staff attorney, and deputy director, prior to becoming the executive director in 1992. In the interview, he recalls some of the earlier cases he worked on that focused on disability rights, senior citizens’ rights and 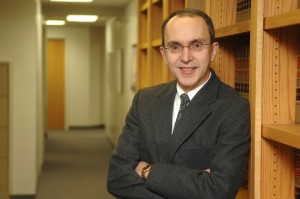 Dennis discusses the history and development of Iowa Legal Aid, which became a statewide program in 2003. In the early years, Iowa Legal Aid was funded almost exclusively by the LSC, but the organization started diversifying its funding in the 1980s. After Congress reduced LSC funding in 1995, Iowa was one of the first states that initiated new state support. Driven and supported by an extraordinary long-term staff, the work of Iowa Legal Aid has covered a wide range of issues and has impacted and improved many areas of law in the state, such as housing law, where Iowa Legal Aid helped to clarify notice provisions and rights and responsibilities of both landlords and tenants, domestic violence, disability rights, and consumer law. Iowa Legal Aid, which has received a number of technology innovation awards, has also managed to be very accessible on an equal basis for clients across the largely rural state. Special projects have included Iowa Legal Aid’s Health and Law Project, which connects patients of community health centers with lawyers to address underlying legal issues that are impacting the patients’ health, Iowa Legal Aid’s Low-Income Taxpayer clinic, a Foreclosure Defense Project, and coordination of legal services in response to flooding and other disasters in the state, among other special initiatives.

Community outreach and education has always been an important part of the work of Iowa Legal Aid , and the organization distributes its quarterly newsletter, the Equal Justice Journal (previously Poor People’s Press), of which Groenenboom serves as the editor, to over 7,000 households.

Groenenboom has closely worked with the Iowa State Bar Association, where he served on the Health Law Section Council, and served on the Civil Policy Group of the NLADA, which he chaired from June 2012 – November 2014, He has been active in working on social justice issues in his church, Common Cause, and the Iowa Pride Network, among other organizations.

Reflecting on the significance and future direction of legal services work, he emphasizes that: “I think it is very important that we don’t lose sight of the fact that part of what we’re doing is trying to get people out of poverty and to have better lives.”

A transcript of the interview is available at Digital Georgetown: