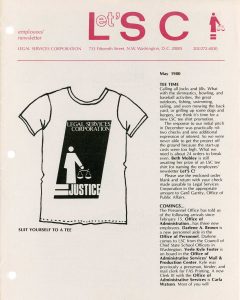 The NEJl has recently expanded its finding aid for the LSC records (NEJL 012). The Legal Services Corporation Records constitute one of the core collections of the NEJL, and came to the NEJL in several different accessions. Many of the materials were donated from LSC’s in-house library. The collection consists mostly of gray literature – generally defined as publications that are not controlled by commercial publishers, such as research reports and proceedings of board meetings, and of audio-visual materials. The LSC collection is not a traditional manuscript collection and is partially “artificial”: to fill gaps in specific series and to facilitate easier access to LSC materials, materials from other NEJL collections are included in the LSC finding aid, even though they remain part of other NEJL collections, such as the Bill McCalpin Papers.

The NEJL has started working on a few projects in preparation for the 50th anniversary of In re Gault next year. We are currently collaborating with the NJDC to scan the entire original In re Gault 387 U.S. 1 (1967)  case file, using the new Innovation Hub at the National Archives, for example, and more projects are planned down the road. Stay tuned…

When reviewing correspondence files from the early 1990s, the NEJL archivist recently discovered an unpublished manuscript: Experiences of a Legal Aid Lawyer by Junius L. Allison [ca. 1993]. Allison (1909-2003), who was originally from North Carolina, worked at Chicago’s Legal Aid Bureau in the 1940s and joined NLADA’s staff in 1953. From 1962-1971, he served as the organization’s Executive Director. Allison’s manuscript includes detailed recollections of his work for the Chicago Legal Aid Bureau in the 1940s, and his work for the NLADA in the 1950s and 1960s, where he closely cooperated with Emery A. Brownell. From an archivist’s perspective, Allison’s memoirs are also interesting, because they include descriptions of the contents of NLADA’s library in the 1950s and 1960s, as well as descriptions of some of NLADA’s promotional projects, such as the launch of the “Justice” TV series in 1953. The manuscript can be reviewed at the NEJL.

The NEJL also holds a few collections that document the development of public interest law more broadly, beyond the history of legal services. One of these is the Center for a New Democracy collection on campaign finance reform. The Center for a New Democracy, a project of the Tides Foundation, was established in 1991 to promote democratic reform through research, public education, litigation, and community organizing and training. A particular focus was on public financing of elections and fair voting reforms. The CND existed until 1996, and Donna Edwards served as its director from 1994-1996.

In addition, the collection includes a range of reports, pamphlets, and articles (gray literature) on campaign finances in various states and in the U.S., including statewide surveys of “American Attitudes Toward Money in Politics” conducted by Bannon Research on behalf of the Center for a New Democracy in Massachusetts; Montana, Maine, Oregon, Colorado, and California.

Of particular local interest in Washington, D.C. are the materials related to Initiative 41, a 1992 ballot initiative that limited contributions to $100 for the election cycle for district-wide races and $50 per cycle for Ward races. The Center for a New Democracy and the DC community group DC ACORN, a principal supporter of the initiative, undertook a study to analyze the early impact of Initiative 41 on elections in the District. The collection also includes case files from National Black Police Association v. District of Columbia, 108 F.3d 346, 348-49 (D.C.Cir.1997). The case challenged the constitutionality of the new D.C. law as imposing “unprecedented limitations on the right of individuals and groups to contribute, and of political candidates to accept, contributions in support of campaigns for elected public office.”

A collection inventory exists, and the collection can be accessed at the NEJL.