This is a vid 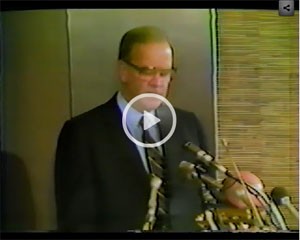 eo of a historic press conference held by the ABA in 1981 in response to the plans by the Reagan administration to eliminate the Legal Services Corporation. It includes extensive remarks by William Reece Smith Jr. (1925-2013), ABA president from 1980-1981, who introduces the press conference: “We are here today because we’re troubled…deeply troubled over President Reagan’s plans to eliminate the Legal Services Corporation…We are troubled because we see it as an unwise, unsound move that will cost our society far more in the long run than any immediate dollars we may save.”

The video is available as a streaming file on Digital Georgetown: https://repository.library.georgetown.edu/handle/10822/761860

Alan Houseman. “Civil Legal Aid in the United States: An Update for 2015. National Report for the United States for the International Legal Aid Group (ILAG),” December 2015, available at: https://repository.library.georgetown.edu/handle/10822/761858

To view the live and archived webcast of the conference on Economic Inequality held on December 4th 2015 at Georgetown Law, please go to this link.

We live in an age of vast economic inequality — the top 20­ percent of U.S. households owns more than 84 percent of the country’s wealth, according to Scientific American. On Friday, December 4, Georgetown University Law Center will host a full­-day conference that aims to identify and understand the factors that contribute to this disparity on both a domestic and global level. Georgetown Law Dean William Treanor and Professors Mitt Regan and Peter Edelman open the conference, which includes panels on racial disadvantage, trade policy and more. Columbia University Economics Professor Dan O’Flaherty delivers a luncheon address on the economics of race in the United States, and Georgetown Law Professor Sheryll Cashin makes closing remarks.