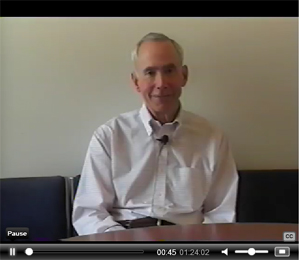 In the 2004 interview, Thomas Ehrlich discusses his career, with a particular focus on his appointment and tenure as the first president of the Legal Services Corporation in 1975. Ehrlich served for three years, closely collaborating with Clint Bamberger, whom he had asked to serve as the executive vice president. Ehrlich recalls the tense moments in October 1975, when Revius O. Ortique flew in at the last hour to break a tie on the eleven-member LSC Board to approve Clint Bamberger’s appointment.  Despite this initial challenge, the Board turned out to be “very supportive of virtually everything that Clint and I tried to do together.” Ehrlich also discusses the major LSC initiatives during this period of rapid expansion of the legal services program, and the major policy challenges that they faced, such as the Green Amendment, which proposed to eliminate the back-up centers.

The full length video recording of the interview, as well as a transcript, is available online at:

Note: The NEJL is collecting bibliographic references and links to this and other recent publications on civil legal aid and indigent defense, which can be accessed online for no charge.

[Cross-posted from the Legal History blog]

Mark Spiegel, Boston College Law School (and a former Reggie), has posted Legal Aid 1900 to 1930: What Happened to Law Reform? which is forthcoming in the DePaul Journal for Social Justice:

This article offers a counter narrative to the conventional description of legal aid in the United States. By offering this counter narrative it focuses us on certain enduring difficulties that any legal aid or legal services program has to face if it wants to engage in reform efforts: problems of funding and problems of the social and historical context. Conventional wisdom has it that legal aid until the 1960s was largely devoted to individual cases and that it was not until the advent of federally-funded legal services that law reform and social change became part of the delivery of legal services to the poor. Contrary to this conventional wisdom, there is another story. As this article demonstrates, there was an aspiration toward using the legal system aggressively to achieve social justice during the period 1900 to roughly 1920. This changed during the 1920s.

In presenting this counter-narrative, this article first looks at legal aid during the period 1900-1920 to support the thesis that during this period legal aid aspired toward using the legal system to achieve social justice. It then looks at that next decade, the 1920s, and describes how legal aid became the kind of organization that conventional wisdom describes: a legal aid organization devoted almost solely to individual cases with a large focus on domestic relations practice and abandoning any attempt to use law to achieve social justice. More importantly, this article explores why this change to a more traditional type of legal aid occurred. The most interesting theories blame Reginald Heber Smith and the American Bar Association. Smith is blamed because of his alleged emphasis on access to justice in a landmark study of legal aid called “Justice and the Poor” published in 1919. The ABA is blamed because of the alleged “takeover” of legal aid by the conservative bar in the 1920’s, enabled by the ABA’s establishment of a standing committee on legal aid. These theories, however, are too reductionist and overlook two more important explanations for this retreat from law reform: the need for funding and the social and historical context. These explanations are significant not only because they shed light on a neglected part of our past, but because they connect that past to issues that persist until today. 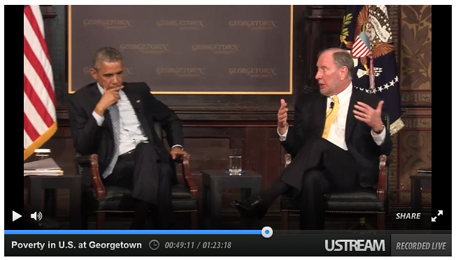 President Barack Obama, Robert Putnam, professor of sociology at Harvard and most recently author of: Our Kids: The American Dream in Crisis, and Arthur Brooks, president of the American Enterprise Institute, participated in a panel discussion on overcoming poverty that was part of the Catholic-Evangelical Leadership Summit on Overcoming Poverty at Georgetown. The discussion on May 12, 2015, was moderated by E.J. Dionne, Washington Post columnist and Georgetown faculty member.

A full-length video recording of the panel discussion that was held this week, on May 12, 2015, can be viewed from the Georgetown University website: 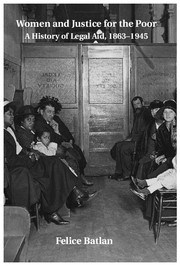 This book re-examines fundamental assumptions about the American legal profession and the boundaries between “professional” lawyers, “lay” lawyers, and social workers. Putting legal history and women’s history in dialogue, it demonstrates that nineteenth-century women’s organizations first offered legal aid to the poor and that middle-class women functioning as lay lawyers, provided such assistance. Felice Batlan illustrates that by the early twentieth century, male lawyers founded their own legal aid societies. These new legal aid lawyers created an imagined history of legal aid and a blueprint for its future in which women played no role and their accomplishments were intentionally omitted. In response, women social workers offered harsh criticisms of legal aid leaders and developed a more robust social work model of legal aid. These different models produced conflicting understandings of expertise, professionalism, the rule of law, and ultimately, the meaning of justice for the poor.

[Part 13 of the series on the 40th anniversary of the Legal Services Corporation, Support: part 6]

This is the sixth in the series of blogs that are focusing on the development, growth and demise of the federally funded support infrastructure: national support centers; state support; training; technical assistance; and information sharing and dissemination. This blog will explore where we are today and the future of support. The first blog focused on the development of that unique system and ended with the inclusion of the “Green Amendment” in the LSC Act. The second and third blogs discussed what LSC did between 1975 and 1981 to preserve, expand and strengthen the support system brought over from the OEO legal services program. The fourth discussed the efforts by the LSC Boards appointed by President Reagan to defund or limit support. The fifth blog explored the time between 1985 and 1996 and the ultimate Congressional action that eliminated funding for support.

The network of state and federal support and training entities formerly funded by LSC has been curtailed, and some of its components have been substantially dismantled. However, many critical components still exist.

Since the loss of their LSC funding, most of the national centers have continued and received funding through national and regional foundations and some IOLTA programs. Many have thrived and grown in funding, national recognition and effectiveness. Examples include: National Center for Law and Economic Justice, National Housing Law Program, National Center for Youth Law, the National Health Law Program and Justice in Aging (formerly the National Senior Citizens Law Center). A number of the national support centers that had focused solely on issues affecting the low-income community have broadened their focus to attract new sources of funds and also grown in effectiveness. Examples include the National Consumer Law Center, National Employment Law Project, National Immigration Law Center and the Insight Center for Community Economic Development (formerly the National Economic and Development Law Center). Several (e.g., National Center on Women and Family Law) closed their doors when they were unable to raise sufficient funds to operate effectively.

The National Clearinghouse became the Sargent Shriver National Center on Poverty Law and continued the Clearinghouse Review until 2015. It is a major state level advocacy entity. It also incorporated the Center for Legal Aid Education and now is a leader in providing substantive, skills, advocacy and racial justice training for civil legal aid programs.

Although the Regional Training centers no longer exist as such, some programs which housed the centers have continued some training activities. NLADA also ensures substantive law training at national conferences, conducts a substantive law training program for newer attorneys and paralegals every two years and conducts a conference for litigation directors every two years. The Management Information Exchange (MIE) provides management training for executive directors, managers, supervisors and fundraising staff.

At the state level, the network of LSC-funded support centers has been replaced by a group of independent non-LSC funded entities engaged in state advocacy that operate in over 30 states. Only 12 of the current state entities are former LSC-funded state support centers. Several states have been unable to recreate a significant state support capacity at all. A survey of state advocacy and support conducted by the Project for the Future of Equal Justice during 2000 and 2001 (The Missing Link in State Justice Communities: The Capacity in Each State for State Level Advocacy, Coordination and Support) revealed that since the loss of LSC funding for support in 1996: (1) A few states have preserved and/or strengthened the capacity for state level advocacy, coordination and information dissemnation, have increased training and developed very comprehensive state support systems; (2) in a number of states, there has been no state level policy advocacy, no significant training of staff, no information sharing about new developments, no litigation support and no effective coordination among providers; and (3) in a number of states, some state support activities have been undertaken by new entities or carried on by former LSC-funded entities. Those activities that do exist vary widely. In some states an existing entity continued to exist but at lower funding. In other states, a new entity was created to replace an existing entity or to work alongside an existing entity. In still other states, entirely new ways of providing state level advocacy, coordination and support have emerged, such as the Michigan Poverty Law Project, a joint endeavour of Legal Services of South Central Michigan and the University of Michigan Law School.

The future: Many of the national centers are thriving but will continue to need ongoing foundation and IOLTA support to continue their effective work. The Shriver Center has become a leader in state advocacy and training. NLADA and MIE will continue their critical training and management assistance activities.

Although there remain very effective state support centers and initiatives in some states, in other states there is a big challenge to ensuring effective state advocacy, coordination and support. As states move forward in creating integrated, comprehensive systems of civil legal aid delivery, it is essential that these new systems ensure extended representation in complex litigation, in class actions, and on systemic issues; and representation before state and local legislative and administrative bodies that make laws or policies affecting low-income and vulnerable people. In addition, these state systems must ensure that all individuals participating in providing, supporting, or managing civil legal aid should receive ongoing training and participate in professional and leadership development activities. Management information and information about new developments in the law also should be disseminated to all advocates and managers. Support should be provided on state legal issues, and advocates should coordinate their work on behalf of the client community. Finally, these emerging state systems must assure that providers in the state should work and coordinate with national entities and organizations to receive support and information about changes in law and policy and to ensure that the interests and legal rights of low-income persons are taken into account by national bodies involved in civil justice and dispute resolution.

From the announcement: One in five children grows up poor in the richest nation on earth. Harvard Professor Robert Putnam​ ​documents and challenges this human and economic failure in his new bestselling book Our Kids: The American Dream in Crisis. Putnam, also the author of​ ​Bowling Alone and co-author of American Grace, will share his groundbreaking research, compelling stories and unusual passion for the widening opportunity gap at the opening public session the Catholic-Evangelical Summit on Overcoming Poverty.

Putnam’s presentation ​will be followed by a distinguished panel of religious and national leaders will ​discuss long-neglected questions including ​h​ow Catholic, evangelical, and other leaders ​can ​help make overcoming poverty a clear moral imperative and urgent national priority​. Georgetown President John J. DeGioia will open the Dialogue. ​

Link to full announcement and RSVP.

[Cross-posted from the Poverty Law blog]