[Part 11 of the series on the 40th anniversary of the Legal Services Corporation, Support: p. 4]

This is the fourth in a series of blogs that are focusing on the development, growth and demise of the federally funded support infrastructure: national support centers; state support; training; technical assistance; and information sharing and dissemination. This blog will explore the efforts by the LSC Boards appointed by President Reagan to defund or limit support. The first blog focused on the development of that unique system and ended with the inclusion of the “Green Amendment” in the LSC Act. The second and third blogs discussed what LSC did between 1975 and 1981 to preserve, expand and strengthen the support system brought over from the OEO legal services program.

At the beginning of 1982, the support structure consisted of 17 national support centers; state support programs, joint ventures, or units of basic programs in most states; 5 regional training centers; a management assistance project at NLADA; a substantive training project at the Western Center for Law and Poverty; six computer-assisted legal research (CALR) projects; and the National Clearinghouse for Legal Services in Chicago. The Office of Program Support and the Research Institute within LSC were no longer in existence.

In 1982, the newly appointed Board of LSC (all of whom were recess appointments and not confirmed by Congress) began to focus on the LSC funded support structure.   Support was examined by a board committee on grants and contracts. The chairman of the committee, Clarence McKee, prepared a report which recommended a number of contract conditions for national support centers that would have required the centers to consider merger or consolidation, to eliminate any overlap among centers as to substantive law and client population, to stop the filing of amicus briefs without prior approval by the president or board, to stop training, to provide recommendations and options regarding alternative mechanisms and vehicles for the provision of support, and to limit direct delivery of legal services to eligible clients.

In 1982, the board, after considerable controversy, ordered a special study on support and authorized only six months grants. The study on support was to be conducted and completed by June 20, 1983, but that did not happen. The study was to review the existing support structure to determine whether or not there was a more effective, efficient and economical delivery system for the provision of national support and state support. 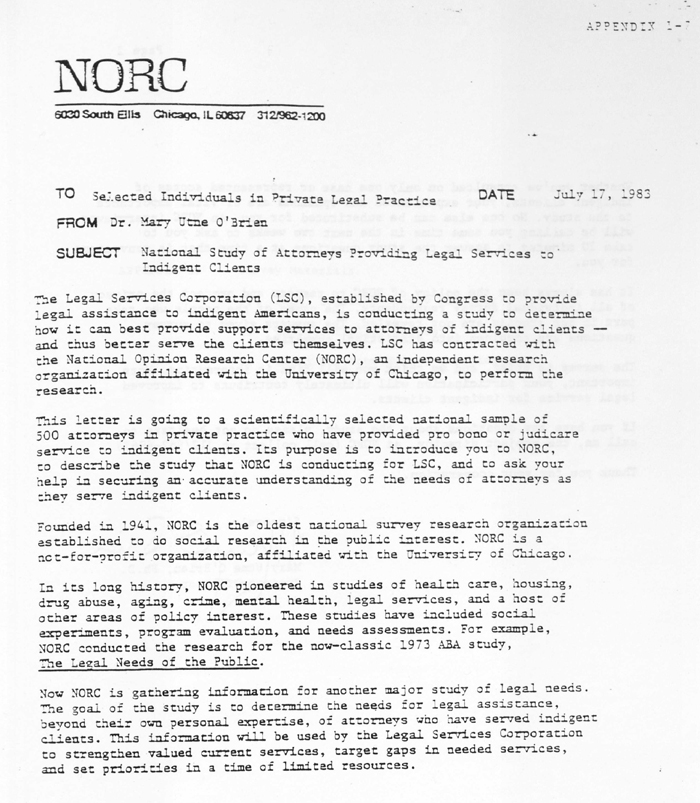 The study involved four components. The first was a survey to identify the areas in which support was needed; specific information on where and how support needs were presently being fulfilled; the effectiveness of the sources of support arid satisfaction with those sources; and information on potential sources to meet unsatisfied support needs. That survey was carried out by the National Opinion Research Center (NORC) under a contract with the Corporation. It was not publicly released until 1985. The results of that survey supported the continuation of the existing state and national support centers.

Key findings of the NORC study include the following:

Second, the Corporation undertook an evaluation of each of the 17 national support centers and 11 of the state support centers. These evaluations were of mixed quality; some had to be redone because of their poor quality. All evaluations contained numerous factual errors. Many of the evaluators had no previous legal services experience and knew nothing about the support structure.

Third, the Corporation was to commission a study of the “important poverty law areas” and “alternative resources” in these areas which would go beyond the survey and the evaluations.

Such a study was never commissioned.

Fourth, the study was to review all of the current records of national support and address the specific questions raised in 1982 by the grants and contracts committee.

The Corporation also imposed a new requirement on both state and national support centers. They were to set forth their plans, proposals and timetables within 90 days after January 1, 1983 for closing any Washington offices or separate state capital offices or show cause to the satisfaction of the LSC president why the services at separate offices to local programs or to its area of specialized law could continue in view of the new Congressional restrictions and prohibitions on legislative activities. All of the national and state support centers provided such information. None of their separate capital or Washington offices were closed because no separate office was devoted exclusively to lobbying as the board and new president believed.

In 1983, LSC also promulgated LSC Instruction 83-9, Grant Conditions for National and State Support, 48 Fed. Reg. 54,305 (December 1983). In the state and national support instruction and a subsequent proposed regulation, 49 Fed. Reg. 34190 (August 28, 1984) LSC attempted to narrow the role of national and state support centers. Under LSC plans, centers would have been limited to providing advice, assistance, training and materials to local legal services staff. They  would have been severely limited or precluded from a whole range of advocacy activities which state and national support have previously undertaken: legislative representation before Congress and at the state level; administrative representation before federal and state agencies; litigation challenging major national or state policies; and development of networks of advocates and client groups, both to assure effective coordination of advocacy activities and to mobilize support when necessary to prevent implementation of new policies. The Instruction also prohibited centers from using fiscal year 1984 funds to support branch offices.

The “affirmative” rider preventing an LSC board of directors, which was not confirmed by the Senate, from taking adverse action against legal services programs. It was first included during 1982 for the FY 1983 appropriation which took the form of a Continuing Resolution. Congress adopted a FY 1984 appropriations bill in late November of 1983 which strengthened the “affirmative rider” by (1) providing for a clear formula for funding legal services programs and prohibiting LSC from altering those grant levels and (2) refunding all current grantees and contractors with a required funding increase unless contrary action was taken by a confirmed LSC board of directors by January 1, 1984. Both the 1984 restrictions and affirmative rider provisions were kept in place under the FY 1985 appropriations act.

A preliminary injunction was issued on March 23, 1984 based on an opinion of March 6, 1984, enjoining the Corporation from terminating grants to the regional training centers because its actions violated the “affirmative rider” and because the Corporation failed to provide a hearing as required by §§l007 (a) (9) and l0ll of the LSC Act. See Massachusetts Law Reform Institute v. Legal Services Corporation, 581 F. Supp 1197 (D.D.C. 1984). LSC then sought and obtained an expedited appeal. On June 14, 1984, the Court of Appeals for the D.C. Circuit affirmed the preliminary injunction finding neither abuse of discretion nor any reliance upon an incorrect legal theory. The district court issued a final judgment on December 19, 1984. See 601 F.Supp. 415 (D.D.C. 1984). The case was settled in June 1985.

As part of the effort to redefine support functions, LSC sought to increase the amount of training undertaken by state and national support centers. This step, if it had not been part of the effort to restrict support center advocacy activity, and if additional funds had been provided, may well have enhanced training for program staff. In 1983, however, LSC did not attempt to develop any new approach to training before taking steps to eliminate the structure put in place in 1982. Nor did LSC attempt to build upon the structure and make improvements in it. Instead, LSC began dismantling the training programs before the experiment with the decentralized approach they represented could be fully tested. In fact, the evaluations which LSC conducted in 1983 suggested that the regional training centers were providing effective training.

Another support controversy involved six computer-assisted legal research (CALR) projects which were funded in 1981 and 1982 to provide computer-assisted legal research services to local programs on a regional basis. LSC was considering a major study and evaluation of CALR. It failed to fund the CALR projects until late March of 1984, and unsuccessfully attempted to limit funding to six months. It also sought unsuccessfully to deny the projects the percentage increase in funding to which they were entitled under the LSC Appropriations Act for 1984 (Pub. L. 98-166). The Corporation never proceeded with the evaluation.

In short, the early efforts of the boards appointed by President Reagan did not dismantle the support infrastructure. It remained in place through 1985.