[Part 8 of the series on the 40th anniversary of the Legal Services Corporation, support: p.1]

The second director of OEO legal services–Earl Johnson· (1967-68) – focused on “law reform” for the poor as the chief goal of OEO legal services. Johnson chose atypical implementation methods and among many tactics (including the Reginald Heber Smith Fellowship Program) created a unique national structure of advocacy, support, training, technical assistance and information sharing. No other legal aid system had such a structure.

A large investment was made in the “back-up centers”: national programs, initially housed in law schools, organized around substantive areas or a particular part of the eligible population. These centers engaged in national litigation and legislative and administrative representation to eligible clients while providing support, assistance and training to local programs. These centers provided specialized representation and specialized knowledge that was essential to the development of new areas of poverty law. They also provided leadership on key substantive issues and worked closely with the national poor people’s movements of the early legal services years (e.g., the National Welfare Rights Movement and the National Tenants Organization). At the end of the OEO era, the following national centers were fully functioning: 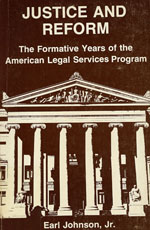 emphasized the major strengths of the back-up centers as follows:

These national centers were supplemented by a national publication to describe poverty law developments, the Clearinghouse Review produced by the National Clearinghouse, and by a case reporter, the Poverty Law Reporter. For a brief period, .OEO also published Law in Action to publicize legal services victories and provided funds to NYU Law School to publish the Welfare Law Bulletin. The Clearinghouse Review still exists, though it no longer publishes a hard copy. The Poverty Law Reporter, a Commerce Clearinghouse loose-leaf service, was discontinued by LSC in 1980. 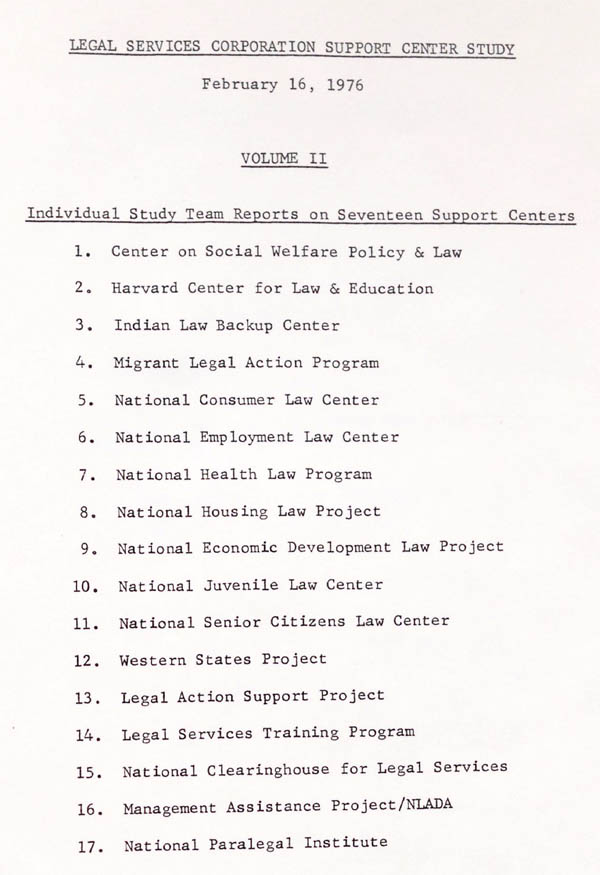 OEO also funded national training and technical assistance programs first at Northwestern University Law School and later at Catholic University Law School. The national training events played a key role in assuring effective coordination among programs over newly emerging issues and provided a means of linking key substantive advocates within local programs to each other and to the national experts in the support centers or elsewhere. Technical Assistance on management issues was provided by the National Legal Aid and Defender Association. A National Paralegal Institute provided support to paralegals.

While this support structure took several years to develop by the early 1970s it was fully operational and faced few threats from federal officials or from Congress. However, beginning in January of 1973, President Nixon appointed Howard Phillips, a critic of the war on poverty and of the legal services program, to head OEO. Although Phillip was to preserve legal services for the eventual transition to the Legal Services Corporation, he declared: “I think legal services is rotten and it will be destroyed.” He put legal services programs on month-to-month funding, cancelled law reform as a program goal, and moved to defund migrant programs and back-up centers. Marshall Boarman, who was put in charge of research and development, wrote several memos on back-up centers, arguing that they were duplicative, unaccountable, focused on social change and unnecessary to providing legal services to the poor. These provided the intellectual support not only to Phillips but also to Congressional critics such as Edith Green and later to opponents in the Reagan era.

The assault on legal services and the back-up centers by OEO was stopped when a federal court enjoined Phillips from acting as director of OEO because his name had not been submitted for Senate confirmation. See Williams v. Phillips, 360 F Supp. 1363 (D.D.C. 1973) and Government Employees, Local 2677 v. Phillips, 358 F. Supp. 60 (D.D.C. 1973).

However, stopping OEO and Phillips did not end the threat to the support structure and back-up centers. That threat became real again during consideration by Congress in 1973 of the creation of the LSC Act. In June of 1973, the House took up the bill to create LSC and during floor debate, which got quickly out-of–hand, added a number of amendments to the Committee bill that would curtail many law reform activities by legal services programs. One of those amendments was by Congresswoman Edith Green, a Democrat from Oregon.

The Green Amendment modified §1006(a) (3) of the proposed Legal Services Corporation Act (42 USC §2996(c) (3)) to specify that LSC could undertake directly, and not by grant or contract, the following activities: (a) research; (b) training and technical assistance; and (c) information clearinghouse activities. The sponsor believed that these activities described the back-up centers and that requiring the activities to be performed directly within LSC would eliminate the back-up centers as well as the National Clearinghouse, the National Paralegal Institute, the national training program, and possibly even state support centers.

Congresswoman Green’s intent was clear. However, she made a serious drafting error in amending only part of the LSC legislation. Because she was familiar with the OEO legislative provisions on research, under which the support centers had been previously funded, she assumed that the back-up centers would be funded under the research and technical assistance provisions of the LSC bill. She did not take into account the provisions in the legal services legislation that provided for funding of programs providing legal assistance including specialized legal assistance.

Ms. Green was not aware of the direct advocacy activities of the support centers and their professional relationships with poor clients. She assumed that the centers were primarily  research organizations that developed new theories. In her view, the centers were the brains and the local program staff were the workers that carried out the orders of the back-up centers. This belief was never accurate and it assumed a role that the back-up centers never played. She used a series of examples provided her by conservative critics of the program. However, many of these examples involved the activities of local programs, the legal services training program or (in many cases) non-LSC-funded organizations.

When the Senate took up consideration of the House passed bill in late 1973 and early 1974, it significantly modified what the House had done including fundamentally changing the Green Amendment. The compromise reached during the Conference Committee on the legislation also preserved the back-up centers and the fundamental support structure created by Earl Johnson in OEO. In Mat 1973, the conference report barely passed the House (190-183) after a recommittal motion to include the Green Amendment. The national centers became the focus of opposition to legal services because they were perceived as the brains behind the activism of legal services programs, or the “cutting edge of social change” as Congresswomen Green charged. At that point the legislation became embroiled in the politics of the impeachment process. Key conservative leaders in the House and Senate (and several conservative supporters of the President) made their continued support for President Nixon dependent upon his promise of a veto if national back-up centers were not eliminated. The President then demanded that the Green Amendment be added to the bill in exchange for his support. Ultimately the Senate agreed and a final compromise was passed by both houses. President Nixon then signed the bill on July 25, 1974.

But the question then became: what would the new LSC do to interpret and implement the Green Amendment?