The LSC restrictions imposed in 1996 and subsequently, left legal services programs and their staff with less capacity to effectively represent low-income persons in the courts and before other forums that affect their rights and responsibilities. Even so, over 95% of the work done in legal services in 1995 could continue and over 98% of the cases brought to court in 1995 could still be brought. Moreover, there continue to be many critically important representational activities that can still be done by LSC-funded entities, and programs can continue to address systemic problems faced by low-income persons in virtually all substantive areas.

Restrictions on types of cases that could be handled: The 1974 LSC Act prohibited (1) litigation involving nontherapeutic abortion; (2) representation in school desegregation cases; (3) representation in selective service and military cases; (4) representation in certain juvenile cases; (5) representation in criminal cases; (6) representation in habeas corpus collaterally attacking a criminal conviction; and (7) bringing fee-generating cases ( defined as any case or matter which, if undertaken on behalf of an eligible client by an attorney in private practice, reasonably may be expected to result in a fee for legal services from an awards to a client, from public funds, or from the opposing party.) The restriction on juvenile representation was removed during the 1977 reauthorization of the LSC Act.

Restrictions on clients that could be represented: The LSC Act permits representation of all aliens, public housing residents, prisoners and others so long as they met financial eligibility guidelines.

Restrictions on representation and other activities: The 1974 LSC Act included restrictions on legislative and administrative advocacy, ballot measures, initiatives or referendum, class actions, training and organizing, but there were qualifications and exceptions that significantly limited those restrictions.

Legislative and administrative advocacy: The 1974 Act prohibited indirect or direct attempts to “influence the issuance, amendment or revocation of any executive order or similar promulgation by any Federal, State or local agency, or to undertake to influence the passage or defeat of any legislation by the Congress of the United States, or by any State or local legislative bodies, or State proposal by initiative petition. However, the Act permitted representing clients before legislative and administrative bodies when “necessary to the provision of legal advice and representation with respect to … (a) client’s legal rights and responsibilities.” The Act also permitted program staff to testify, draft, or review measures or to make representations to government agencies, legislative bodies, committee or members when requested to do so. The Act also permitted representation when agencies and legislative bodies are considering a measure directly affecting the activities of a program or the Corporation (self-help lobbying).

Class actions could be undertaken with the express approval of the project director under policies promulgated by the program’s board.

Organizing: While programs could not organize a group, association, and the like, they could provide legal assistance to such groups.

Funds Covered: Restrictions on the type of cases and scope of representation applied to both LSC and private funds, but not to non-LSC public funds (which included IOLTA funds). 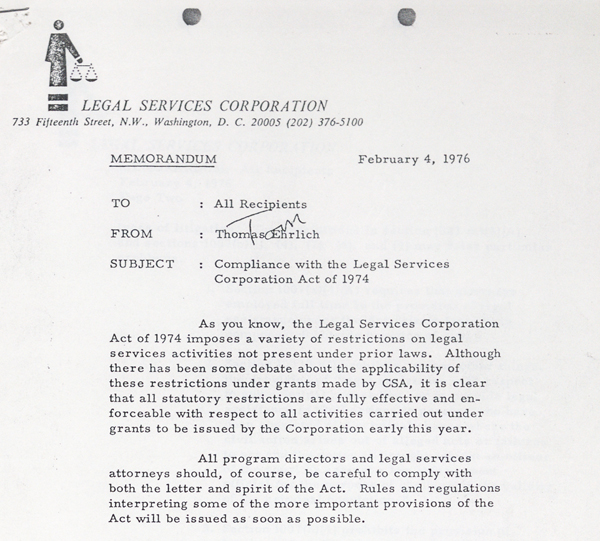 RESTRICTIONS ADDED ON LSC FUNDS IN THE 1980S BY APPROPRIATION PROVISIONS

Restriction on types of cases: Programs could not participate in representation (1) relating to abortion with LSC funds and (2) in redistricting cases or activities involving the taking of the census with both LSC and private funds.

Restrictions on clients that could be represented: As a result of provisions contained in the LSC appropriation and the Immigration Reform and Control Act of 1986, use of LSC funds was only permitted for representation of the following categories of aliens:

Class Actions: LSC funds could not be used to bring a class action against a governmental entity except under the following conditions: (1) the relief was sought for the primary benefit of eligible clients; (2) the program had to notify the government entity involved and attempt to negotiate the issues which adversely affect the particular clients represented; (3) the board of each program had to adopt a class action policy, which could preclude or limit class actions; (4) before filing a class action against a governmental entity, the Project Director had to: (a) expressly approve the filing consistent with program policies; (b) determine that the government entity: (I) would not change its policy or practice; (ii) that the policy or practice would continue to adversely affect eligible clients; (iii) that the program had notified the government entity of its intention to seek class relief; and (iv) that the efforts to negotiate had failed.

Training: LSC funds could not be used to disseminate information about public policies or to train people how to lobby or participate in agency rulemaking.

Restrictions on personal activities of staff attorneys: No new restrictions.

RESTRICTIONS IMPOSED IN 1996 APPROPRIATION PROVISIONS AND CONTINUED TO DATE

Non-LSC funds: With regard to the 1996 restrictions described below, all of a program’s funds from whatever source (except tribal funds) are restricted. Programs cannot use funds from non-LSC sources to undertake activities that are subject to the restrictions and that cannot be done with LSC funds. However, programs may transfer non-LSC funds to affiliated or entirely separate entities to use for representation in restricted cases.

Restrictions on types of cases

Welfare Reform: Programs cannot engage in litigation on behalf of groups or participate in lobbying or rulemaking involving State or Federal welfare reform initiatives, laws or regulations (unless they fall within the exceptions for lobbying and rulemaking outlined below). However, programs can represent an individual client who is seeking relief from a welfare agency because of threatened adverse action based on a welfare reform law, regulation or policy. As a result of the Supreme Court decision in Legal Services Corporation v. Velazquez, 531 U.S. 533 (2001), legal services programs representing such individuals in cases seeking relief from welfare agencies can now raise all relevant legal issues and can challenge existing statutory law or regulations.

Abortion: Programs cannot participate in any litigation with regard to abortion.

Restrictions on clients that could be represented

Aliens: Programs generally cannot use any funds to represent most undocumented and several other categories of aliens. However, certain legal aliens can be represented using both LSC and non-LSC funds. Specifically:

Prisoners: Programs cannot participate in civil litigation on behalf of a person incarcerated in a Federal, State or local prison or participate in administrative proceedings challenging the conditions of incarceration.

Legislative Advocacy: Programs are precluded from directly or indirectly attempting to influence pending or proposed legislation. However, programs can use non-LSC funds to respond to a written request for information or testimony from a legislative body or committee, or a member of such body or committee, so long as the response is made only to the parties that made the request and the program does not arrange for the request to be made.

Administrative Advocacy: Programs cannot represent clients or client interests before administrative agencies engaged in rulemaking and cannot use LSC funds to respond to requests of administrative officials with regard to rules directly affecting clients. However, programs can use non-LSC funds to: (1) participate in public comment in a rulemaking proceeding, or (2) respond to a written request for information or testimony from a government agency, so long as the response is made only to the parties that made the request and the program does not arrange for the request to be made.

Solicitation: Programs are prohibited from representing clients as a result of in-person solicitation. However, programs can operate community legal education programs and engage in outreach activities to client groups, and may represent clients who seek assistance as a result of those activities, but may not affirmatively seek to identify particular individual participants who have specific problems on which they need assistance and advise those particular participants to seek such assistance from the program or another program.

Client identification: Except in emergency situations, programs are required to identify by name to the defendant any client who is a plaintiff and obtain a signed statement of facts from such plaintiff before the program can file suit or engage in pre-complaint settlement negotiations on the client’s behalf. Access by adverse parties to the written statement of facts is governed by the law and discovery rules of the court in which the action is brought.

Case disclosure: Upon request, programs must disclose to the public and must report semi-annually to LSC certain information about each case that is filed by program attorneys in any court (not administrative agencies). The information includes (1) the name and address of each party to the legal action, (2) the cause of action of the case, and (3) the name and address of the court in which the case was filed and the case number assigned to the case. Programs do not need to file name and address information when such information is protected by an order or rule of a court or by a State or Federal law or when revealing such information would put the client of the program at risk of physical harm. This requirement applies only where a program represents a plaintiff in an action; cases where the programs represent defendants or third parties need not be reported.

Restrictions on personal activities of staff attorneys: No new restrictions.