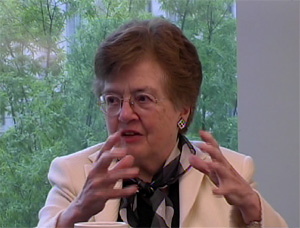 In the interview, conducted by Linda Perle in 2005, Patricia Wald recalled how she became involved in the nascent legal services field in the mid 1960s. While raising her five children, she co-authored a working paper on Bail in the United States for the 1964 National Conference on Bail and Criminal Justice with Daniel Freed, which was part of the criminal justice reform initiative of the Department of Justice. In the following year, she helped organize and prepared a working paper for the 1965 Conference on Law and Poverty, a milestone in the establishment of the OEO legal services program. Wald then started working for the National Crime Commission, but left the Justice Department after the change of administration in 1968. She applied for a job with the Neighborhood Legal Services Program in Washington, D.C. in 1968, where she eventually worked with the test case task force. While working with NLSP, she was involved with some of the most significant cases that shaped the practice of poverty law, including Edwards v. Habib, 397 F.2d 687 (1968) and Helen Harris v. Guy H. Harris, Yvonne H. Parks v. Norman E. Parks, 424 F.2d 806 (1970) and McKelton v. Bruno 428 F.2d 718 (1970). She also recalled the political struggles with the D.C .government over welfare cases in the days prior to home rule. In the early 70s, she joined the staff of the Center for Law and Social Policy, where she worked on mental health issues and later for the Mental Health Law Project, later known as the Bazelon Center for Mental Health Law. After serving as the as the Assistant Attorney General for Legislative Affairs at the Department of Justice during the Carter administration, Wald was appointed by President Carter as the first woman to serve as a Judge with the U.S. Court of Appeals for the District of Columbia Circuit in 1979, where she served until 1999. From 1986-1991, she served as the Court’s Chief Judge. After her retirement in 1991, she was appointed to serve as a judge on the International Criminal Tribunal for the former Yugoslavia. After returning from The Hague, President Bush appointed Wald to serve on the WMD Commission.

The full-length recording and transcript is available at: https://repository.library.georgetown.edu/handle/10822/711254

A draft copy of Patricia Wald’s report for the 1965 Conference on Law and Poverty is available at the NEJL: https://repository.library.georgetown.edu/handle/10822/708787