Oxfam America and Feeding America released a new study,
“From Paycheck to Pantry: Hunger in Working America,” which reports that more than half of America’s 46 million users of food pantries and other charitable food programs are workers or from working families; all told, 25 million Americans in households where at least one member works or has recently worked turned to a charitable feeding program in 2013 because their wages and incomes were so low.

On September 23, 2014, the Shriver Center hosted a discussion on the extent to which the U.S. has succeeded in advancing economic opportunity and justice for African Americans, Latinos, and other people of color in this country. The discussion examined the successes and challenges of the War on Poverty, in its 50th Anniversary, through the lens of structural racism in the United States–and what lies ahead. A podcast of the event, and biographical information about the panelists, is available from the Shriver Center’s website. 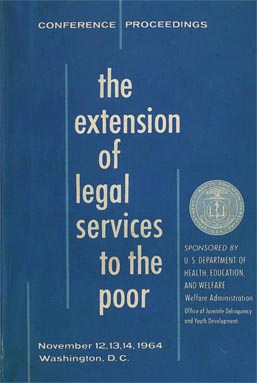 Fifty years ago, in November 1964, the U.S. Department of Health, Education, and Welfare’s Office of Juvenile Delinquency and Youth Development sponsored the Conference: The Extension of Legal Services to the Poor in Washington, D.C. The conference reflected the growing national concern about developing more effective ways of meeting the legal needs of people experiencing poverty, and brought together social workers, lawyers, educators, politicians, and social scientists.

Nicholas deB. Katzenbach, U.S. Attorney General, gave a passionate luncheon address that reflected Katzenbach’s commitment to developing and supporting legal anti-poverty programs as part of the War on Poverty: “It is justice, rather than charity, which calls on us to see to it that the law and the lawyer are involved in the effort to reverse that life sentence (of poverty).”  Referring to the 1963 Gideon v. Wainwright decision, Katzenbach highlighted the need to extend the concerns on the rights of poor people beyond criminal law: “Hopelessness and poverty do not observe neat jurisdictional lines between civil and criminal.” Problems of poor people, he continied, “constitute the new era of public concern, indeed the new area of law, with which we are dealing with at this conference. To be sure these are not new problems – it is our appreciation of them that is new…There must be new techniques, new services, and new forms of interprofessional cooperation to match our new interest…There are signs, too, that a new breed of lawyers is emerging, dedicated to using the law as an instrument of orderly and constructive social change…Communities planning comprehensive antipoverty programs can be expected to include similar provision for the extension of legal services to the poor. And the Office of Economic Opportunity has indicated a willingness to support such programs, both as part of a community action program and also as a separate research and demonstration project.”

“The poor need advocates, not simply to present their side of the story, but to give them hope, to demonstrate that the law is not an enemy, but a guardian, and that public officials are not their masters, but their servants.”

The conference had five panels: The Legal Needs of the Poor; New Legal Services for Economically Depressed Metropolitan Areas; Forewarning the Low-Income Community of the Most Common Legal Difficulties; The Lawyer and the Social Worker; and The Role of Law Schools in the Extension of Legal Services.

Elizabeth Wickenden was among the speakers on the panel: The Legal Needs of the Poor. In her paper, The Indigent and Welfare Administration, Wickenden appealed to use the law to achieve a more equitable application of welfare policy and voiced the hope that the decision in the Gideon case with respect to the right to counsel in criminal cases would be applicable to all civil actions, and to all complaints against the governmental bureaucracy. On the same panel, David Caplovitz from the Bureau of Applied Social Research at Columbia University, spoke about consumer problems for the poor, especially legal problems resulting from missed payments and exploitation through merchants. The panel: New Legal Services for Economically Depressed Metropolitan Areas featured papers highlighting the development of and need for neighborhood legal services programs in New York City, Boston, and New Haven. The third panel: Forewarning the Low-Income Community of the Most Common Legal Difficulties featured papers on educational programs for low-income clients, including a panel on Citizen Advice Bureaus in Britain, and a paper by Ed Sparer – the Director of the Legal Services Unit of Mobilization for Youth — on Education on New York’s Lower East Side, in which he discussed the most effective programs to provide legal information to clients, such as the distribution of wallet sized cards stating one’s rights under arrest. The panel: The Lawyer and the Social Worker highlighted the need for better understanding and closer cooperation between lawyers and social workers. The last panel, The Role of Law Schools in the Extension of Legal Services, featured papers by Robert Spangenberg, who spoke about the legal services programs developed at the Boston University School of Law; Kenneth Pye, Dean of Georgetown Law Center, who discussed the success of the Prettyman intern program, initiated in 1959, and Professor Charles Are of New York University, who spoke about the need to develop law school curricula devoted to legal problems of the poor, and about the efforts at NYU Law school to systematically address poverty from a legal and non-legal perspective.

The conference proceedings are available at the National Equal Justice Library (please contact the Project Archivist for scans), and can also be downloaded from the Hathi Trust Digital Library (for those who have access to the database.)

Two panels at the 2014 NLADA annual meeting, held in Alexandria, VA, November 12-15, were devoted to discussing the history and legacy of the War on Poverty legal services programs. The panel The War on Poverty and Civil Legal Aid: A Historical Perspective, organized and moderated by Alan Houseman, brought together three icons of the legal services movement – Earl Johnson, Jr., Edgar Cahn, and Clint Lyons, as well as a representative of a younger generation of legal services advocates, Nalani Fufimori Kaina, Executive Director, Legal Aid Services of Hawaii.

Earl Johnson, Jr., provided an overview of the history of legal services from the nineteenth century, to the creation and development of the OEO-Legal Services Program, to the establishment of the LSC ten year later, until today. 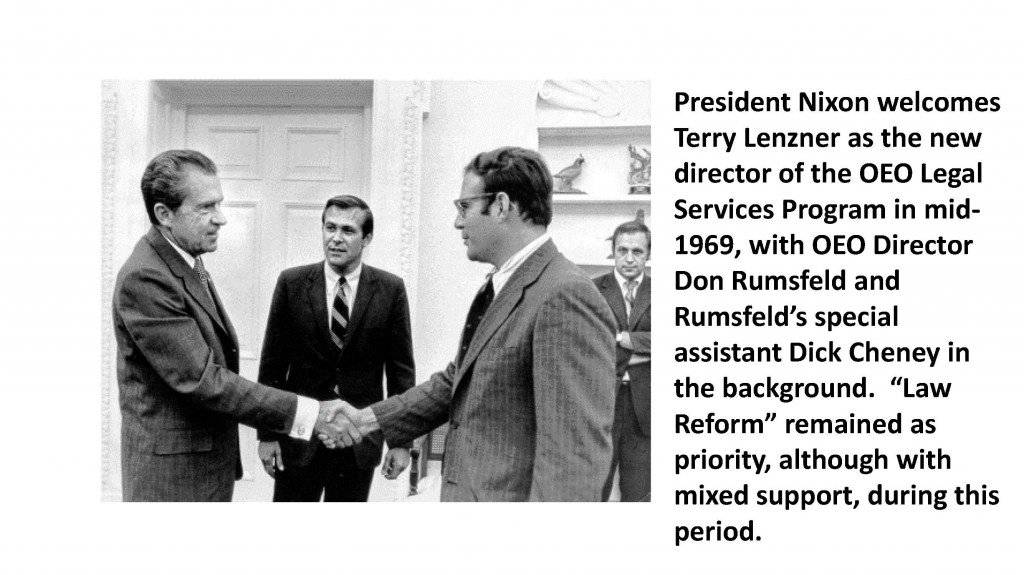 Johnson ended his presentation with two provocative questions: In 1976, Tom Ehrlich, the first president of the LSC, said in his testimony to the House appropriations committee: “Legal assistance for the poor is no longer part of a war on poverty. Rather that assistance is established as a basic right of citizenship.”

“First, has legal assistance been ‘established as a basic right of citizenship’ in the succeeding nearly four decades?” asked Johnson? “Second, while there no longer is a coordinated “war on poverty” to be a part of, has legal services entirely abandoned its anti-poverty mission and effect during that span?” Johnson answered both questions with a “reluctant no,” and highlighted that we have a long way to until right to counsel will be established as a basic right of citizenship. We are, however, “at least on the road,” he said. To the second question, Johnson emphasized that anti-poverty work remains an important part of the mission of legal services, but that the issues are being framed very differently today than they were during the early days of the OEO-LSP. Today’s emphasis tends to be much more on the means rather than on the ends — what legal tools will legal services lawyers be allowed to employ, what does access to justice mean, and how can the vision of equal access to justice be implemented?

Johnson also shared some information on recent ABA right to counsel initiatives, including the Directory of Law Governing Appointment of Counsel in State Civil  Proceedings, recently released by the ABA in cooperation with the NCCRC.

Edgar Cahn highlighted that the “war on poverty was a way of responding to the racial divide and to the civil rights movement” – it was a way to channel that energy and the tensions into government-supported reform programs. Cahn recalled the segregation of the legal profession at the time, and the importance of the legal services program as a vehicle for young African American lawyers to apprentice as legal professionals. Cahn also reminded the audience that the vision to “amplify the voices” of the poor was a critical component of the war on poverty, a vision that he and Jean Cahn initially outlined in their article The War on Poverty: A Civilian Perspective 73 Yale L.J. 1317 (1964).

Clint Lyons, inspired by the civil rights movement, began his career in legal services as a Reginald Heber Smith fellow working in Essex County, NJ. Lyons recalled the rampant urban poverty he saw in Newark, NJ, and the rural poverty he was confronted with when he served as deputy director for the regional office in Atlanta in the Office of Legal Services, where he oversaw the expansion of the southeast region. The anti-poverty impact of legal services has been immeasurable, he emphasized.

Nalani Fufimori Kaina highlighted the importance of the history of legal services for today’s generation of legal services advocates. Especially the Reggies had a huge impact, and helped create a body of law that made a difference in the lives of poor people. Once the Reggie program was cut during the Reagan administration, there was a loss of law reform work because there was no longer a body of people who were doing the work. There always was and continues to be tension between those people who are working on the front lines, and those who are doing law reform work, she observed. The ability to do law reform work depends on ability to provide basic legal services. Many legal services attorneys would love to work on law reform, but are pulled in so many directions, and overwhelmed with work to meet basic legal services needs that they don’t have any time and resources left to do more strategic work. This strategic work, however, continues to be critical, and younger generations of anti-poverty advocates need to play an active role in shaping it.