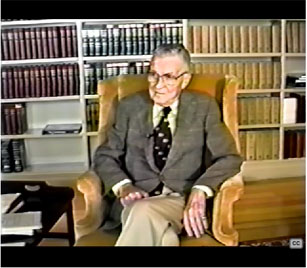 The digitized recording of the oral history interview with Howard Westwood (1909-1994), conducted by Clint Bamberger on Oct. 6th, 1992, is now available online. Howard Westwood, one of the pioneers and leaders of the modern legal aid movement, was born in Cedar Rapids, Iowa, attended Swarthmore College, and received a law degree from Columbia University in 1933. He was a clerk to U.S. Supreme Court Justice Harlan F. Stone for a year before he joined Covington & Burling in 1934. In the 1950s, Westwood joined the Commission on Legal Aid of the Bar Association of the District of Columbia, which initiated a report on the legal aid needs in D.C. The report, published in 1958, was one of the “very key documents in the history of the development of legal aid in the United States,” said Westwood. In the interview, he recalled the efforts to establish the Legal Aid Agency in D.C., the predecessor to the Public Defender Service for D.C., with the support of the Judicial Conference under the leadership of Judge Prettyman. The initial hope was to establish an agency that would represent clients in criminal as well as civil cases. Westwood also supported the establishment of the neighborhood legal services program in Washington, D.C. under the umbrella of the United Planning Organization, which was founded in 1964 with funding from the Ford Foundation. Westwood recalled the tensions between the traditional legal aid society in Washington, D.C. and the new neighborhood legal services program, which aimed at much broader social reforms. 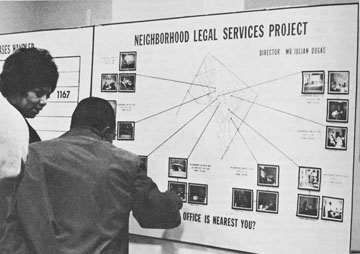 In 1965, Westwood helped facilitate the cooperation between the ABA and the NLADA to support the establishment of a federally funded legal services program. It was Howard Westwood who suggested that Clint Bamberger should be nominated as the first director of the OEO-LSP. Westwood continued to remain on the board of the NLSP, and worked as counsel for NLADA, where he advocated for the ongoing federal support of the legal services program. Westwood, a specialist in aviation law, retired from Covington & Burling in 1979. Westwood was awarded the “Servant of Justice” Award in 1992.

The interview with Howard Westwood is available through Digital Georgetown.

The New Prosperity Law: Expanding Opportunity and Reducing Inequality – 50 Years After the War on Poverty is held at the University of California, Berkeley, School of Law, Oct. 16-17th, 2014.

“This year marks the 50th anniversary of the War on Poverty, which is an important time to reflect on the role that law schools and lawyers have played, and can continue to play, in efforts to reduce inequality and expand opportunity. In the War on Poverty, law schools and lawyers were central actors in a coordinated strategy to end poverty by establishing constitutional protections and substantive rights for the poor. Within a decade of its inception, however, the substantive antipoverty movement gave way to a procedural access to justice agenda. Political battles over resources for legal services were at the heart of this shift, reflecting larger trends of decentralization (from federal to state) and privatization (from the government to the market). As a result, legal antipoverty efforts today are much more local, varied and diffuse than during the War on Poverty.   This symposium will examine lessons from the last fifty years, consider emerging anti-poverty efforts, explore shifts in the funding landscape and identify strategies to reinvigorate the role of law schools and lawyers in a new antipoverty agenda.”

Details and the agenda can be found on the conference website: http://www.law.berkeley.edu/17521.htm

Former USDA Undersecretary Bud Philbrook traced the history of government food programs such as WIC and Food Stamps, and discussed current efforts by governments and NGOs around the world to focus on providing comprehensive medical care, nutrition and education services to pregnant women and small children during the first few years of life, when children gain virtually all of their IQ points. Without these assets, children become stunted, which has tragic effects on their ability to learn and participate as productive citizens.   His presentation can be viewed at this Blackboard link: https://sas.elluminate.com/mr.jnlp?suid=M.E67A3C186B40F9F49B7EF84F6B38D1&sid=2008114

Sociologist Ryan LeCount discussed the racialized history of the War on Poverty welfare programs, and the use of racial stereotypes against political candidates in the last decades of presidential elections.   He presented studies showing how historical and current attitudes toward welfare have been shaped by images of women of color, particularly African American women, as unwilling to work; and how these images have also made an impact on welfare policy, including discriminatory targeting of African Americans for welfare sanctions. LeCount also discussed the documented ways in which this discriminatory administration of welfare programs has resulted in worse life outcomes for targeted welfare recipients, including their low level of civic engagement.  His presentation can be viewed at this Blackboard link:  https://sas.elluminate.com/mr.jnlp?suid=M.16775A2D46F7620EDE0B981D7F3C95&sid=2008114

Justice For All: The History and Future of Legal Aid in Connecticut

Thanks to David Udell for passing this notice along.

(Cross-posted from the Poverty Law blog.)

The Boston College Journal of Law and Social Justice recently published the Symposium issue: “50 Years After the “War on Poverty”: Evaluating Past Enactments & Innovative Approaches for Addressing Poverty in the 21st Century”: Vol. XXXIV No. 2