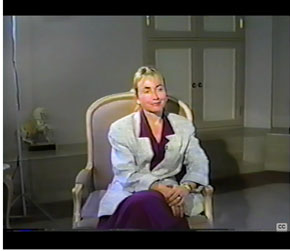 In the videotaped interview, which was conducted by Victor Geminiani in 1991 on behalf of the National Equal Justice Library Oral History Project, Hillary Rodham Clinton recalls her education and career working for legal services from the late 1960s until the early 1980s. Ms. Rodham Clinton got involved with legal services while she was a law student at Yale, where she started volunteering for the New Haven Legal Services organization, one of the first Ford Foundation “Gray Area” model projects. After graduating in 1973, she started working full time as a lawyer for the Children’s Defense Fund, which was founded by Marian Wright Edelman, a fellow Yale graduate whom she had met during her first months in law school. Hillary Rodham had interned for the Washington Research Project, CDF’s parent body, during law school. At CDF, she worked on education and juvenile justice law reform, allowing her to combine her “legal interests and public policy interests.”

In early 1974, Hillary Rodham accepted an offer by John Doar to work on the President Nixon impeachment inquiry staff in Washington, D.C. along with several other young lawyers. After President Nixon’s resignation on August 8th, 1974, she followed Bill Clinton, whom she had been dating, to Arkansas, where he had started teaching at the University of Arkansas Law School in Fayetteville. She got a job at the same law school, and started teaching in the fall of 1974. The dean had asked her to teach criminal law, run a legal aid clinic, and a project providing legal assistance to prisoners in the federal and state penitentiaries. In the interview, she recalled the efforts to gain support for the school’s legal aid program from the Arkansas Bar Association, and the difficulties that legal aid programs in Arkansas faced at the time. After gaining better support for the school’s legal aid program from the Bar Association, she submitted an application to receive federal funding through the Legal Services Corporation. The application was successful, and the program eventually became the Ozark Legal Services. In 1975, she was appointed to the Arkansas State Advisory Committee for the LSC, where she worked on the state-wide expansion of legal services. President Carter appointed Mrs. Rodham Clinton to the LSC Board in 1977 (both she and her husband had worked on Carter’s campaign), and she succeeded Roger C. Cramton as Chairperson of the LSC Board in 1978 and served in this capacity until 1981.

During her tenure at the LSC, the budget increased from $96 million during the President Ford administration to over $300 million. The board oversaw the LSC under the presidents Thomas Ehrlich and Dan Bradley during the rapid expansion of legal services into many previously underserved areas, building a broad, yet solid infrastructure. Tied to the expansion, the board worked on improving access to legal services, and focused on quality, ensuring that delivery systems were the best ones available. During this period, the LSC oversaw the 1007 (h) study, which was mandated by Congress to research the access problems of particular constituency groups such as Native Americans, and initiated the Delivery Systems Study, which analyzed a variety of different systems for the delivery of legal services.

The real strength of the program has been the way it “responded to a very significant need in society,” but did so in an “effective and professional manner,” Rodham Clinton emphasized, so that it was able to withstand the political pressures the federally funded program faced throughout much of its history. She concluded the interview by expressing the hope that the program will continue to grow, and that there will be a lot of room for new people and new ideas, while legal services advocates continue to ask the hard questions: “What’s our purpose, how are we doing it, are we doing it the best way we can, are we meeting our clients’ needs?”

The original interview was recorded on VHS. The full-length digitized interview, which also includes a transcript, is part of the NEJL oral history collection. 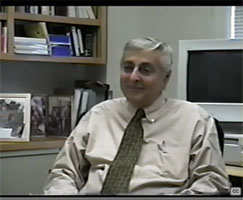 In the wonderful oral history interview with Gary Bellow (1935-2000), which Zona Hostetler conducted in 1999 on behalf of the NEJL Oral History Project, Bellow recalled how his involvement in legal services was sparked by his interest in criminal defense. After graduating from Harvard in 1960, he received a Ford Foundation fellowship to study criminal law at Northwestern University, where he became friends with Earl Johnson Jr., who was studying in the same program. “I was curious, and I wanted to see how the world really worked, and so I went every place.” After a stint in the army, and hitchhiking across the U.S. twice, Bellow came to work for the Legal Aid Agency in the District of Columbia. The Legal Aid Agency was the predecessor to the Public Defender Service for the District of Columbia, which was established by statute in 1960. He worked as an investigator first, and then as a lawyer. During his time there, the agency underwent a dramatic transformation. When he joined in 1962, they had never gotten an acquittal, and his experience was to “find a way to resist this culture that forced everything into plea bargain.” But the agency started to “aggressively assert the rights of criminal defense.” They managed to reduce the caseload, the attorneys became much bolder, and soon they “were running acquittal after acquittal.” Bellow acknowledged his debt to Ken Pye and George Shadoan, the first administrators of the Georgetown’s Prettyman program, which was established in 1960. Interns from the Prettyman program provided critical assistance to the agency, and handled about one sixth of the trials by the mid 1960s.

Bellow became interested in civil matters by visiting the houses of defendants, where he saw life experiences that moved him, and “nothing was being done.” Working on the civil side might be “a better vehicle for bringing about change,” he thought.

In 1963, his friend Dan Freed gave him a draft of the article of Jean and Edgar Cahn, whom he didn’t know. He liked the article, called up Edgar Cahn, and started collaborating with the Cahn’s, working through the article, and helping to devise a strategy for getting the new OEO to fund legal services.

Despite Bellow’s skepticism, the Cahn’s managed to get the support of the leadership of the private Bar for federal support of the legal services program. Bellow recalls the tensions between the community action perspective, and the established Bar leadership. Sargent Shriver was “guiding this merger of young critics and this big-firm Bar leadership,” which was needed to support the legal services program. In 1965, Gary Bellow became Deputy Director of the United Planning Organization (UPO), Washington’s Community Action Program, where he stayed for about one year. They worked on improving public housing in D.C., and began with welfare rights organizing. While working at UPO, E. Clinton Bamberger Jr. asked him to join the Office of Economic Opportunity-Legal Services Program as its Deputy Director, but Bellow decided to stay with UPO. 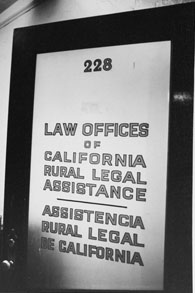 In 1966, Gary Bellow left UPO to work with Jim Lorenz at California Rural Legal Assistance (CRLA), where they collaborated closely with Cesar Chavez and the United Farm Workers on community organizing and legal assistance for migrant farm workers in the San Joaquin Valley. Despite the massive opposition by Governor Ronald Reagan, the state Bar, and several county Bar associations, the OEO continued funding of the CRLA. One of the principles of the CRLA was to involve clients as strategic partners in pursuing their cases, and Bellow became increasingly involved in teaching and group organizing. Collective action served as a powerful organizing and recruitment tool, and “it is no accident that in the 1974 Legal Services Act organizing was prohibited,” Bellow said. “We became increasingly controversial, but I learned about delivery.” Bellow then worked for the United Farm Workers on legal cases and in 1969 was recruited by the University of Southern California School of Law to develop a clinical legal services program. While at USC School of Law, Bellow continued to work as a lawyer, and — encouraged by Cesar Chavez — became counsel to the Black Panther Party. In 1971, he returned to Harvard, where he established the school’s major legal clinic. Later, he and Jeanne Charn initiated the Legal Services Institute, which provided legal services for poor and low-income clients, while offering continuing clinical education for law students and practicing attorneys. During his time at Harvard and under his leadership, the clinical programs at the school expanded, and Bellow always emphasized the importance of clinical education for the legal services movement, as well as the need for law schools to train students in the “hard lawyering work” of providing legal services to the poor.

The interview offers a wonderful opportunity to engage with Gary Bellow’s wide range of experiences and his broad vision of legal services, and learn from his unique perspective on legal anti-poverty work, drawing on theory as much as on practice, and combining sober assessments of the challenges and failures of the legal services movement with hope and inspiration for new generations of anti-poverty advocates and activists.

The interview is available as a streaming mp4 file.

A 1964 radio interview with Gary Bellow by Richard D. Capparella on the “Role of the Lawyer and the Problem of Poverty” is also available through Digital Georgetown.