From this week’s readings, I was amazed at how many old topics (who am I kidding, old friends!) from other classes came into sight: infrastructure, expanding homes into green spaces, gates and seclusions, and several other themes. With so many threads to choose from, it really took me a while to settle down onto one specific topic. Reviewing all of this week’s readings, I was most intrigued by the ‘golden ghettos’ in Sofia, Bulgaria. These new suburbs bring up a few different topics: space in post socialist Bulgaria, new security measures in the suburbs, and the suburban impact on women’s role in society. Although socialist cities had many pitfalls, Bulgaria in the post socialist space can shows deep implications and downsides when capitalism and housing intersect. 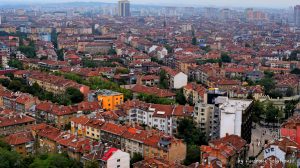 Beginning with space, the decentralization away from Sofia struck a cord-the new suburbs, according to Hirt, showed a total rejection of the old clustered socialist city. Instead of living and working in the city center, people commute to the more affluent suburbs and ‘get out of Dodge’ as quickly as they can. One memorable excerpt addressed a Bulgarian’s complaints about a traffic jam downtown…caused by sheep, so the old and the new were still very much clashing. I think the dislocation away from the urban center takes away from the sense of community, people did not know their neighbors as well and neighbors lived more secluded, private lives. Additionally, moving out from the city center gave the Bulgarians almost a dacha-like escape, once reserved for the party elite, now everyone (who can afford it) could escape the dirt and grim of the city for green space. 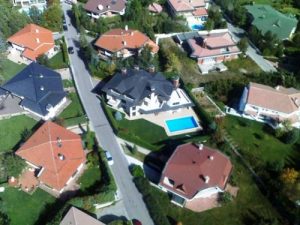 Throughout our course, the term green spaces always sounds like a yeoman appeal for nostalgia and simpler times. However, just like the communal gardens in Russia and other parts of Eastern Europe, it’s a private green space complete with a high stone walls and security cameras. My thoughts immediately turned to the sheet metal car protectors and thick steel doors from last week’s readings. People at last have private property and ‘nice’ things, but across society people turned inwards to protect what they have. One can look at this two ways, as a negative since the public cannot enjoy green spaces and share in community experiences, or as a positive since families’ hard work was rewarded with “a nice big yard so the kids can play…it’s a better place, really, for the family.”

Yards, moats, gates, anything you want-just build it!

Speaking of the family, I would lastly like to touch on the effect that these suburban neighborhoods had on the family and specifically on the role of women in society. It did not cross my mind before this reading, but in post socialist society women lost out on many state programs that assisted raising children such as daycare services. With the new neighborhoods far from the city center and not many two car families, women were increasingly isolated professionally and socially. Much like other aspects covered in this reading, the feelings were not universal as some women enjoyed more free time for themselves and more attention for the family. Regardless of how one assesses the suburbs and gender roles, one can observe a step backwards in terms of gender equality under the banner of increased wealth and prosperity for the family and Bulgarian society.

One Response to Golden Ghettos in Sofia, Bulgaria