The Forgone Memory of the Socialist City

I don’t remember much from my visit to Berlin at sixteen years old; what I do remember more vividly than anything is standing outside the Reichstag, the Berlin Cathedral, the Brandenburg Gate, and imagining rubble. These structures and monuments that felt as if they had been built centuries ago had barely been constructed or renovated a few decades ago. I almost felt cheated. I did not want to see reconstructions of what was once there, I wanted to see what had always been there. It did not take more than one museum visit and a quick google search to realize that almost nothing in Berlin had “always been there.” What does this mean for Berlin then as a city that carries with it and has always carried the burden to define, redefine, and justify its history to the world? What does the history of Berlin’s destruction and reconstruction mean for its image today? This week’s readings detailed the confusion that arose among architects and city planners as they attempted to reconstruct an image of their city after the collapse of communism. 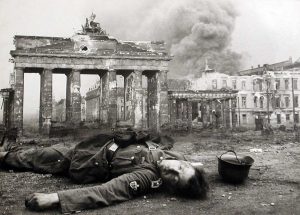 It seems as if it were much simpler to reconstruct the cities of Berlin and Warsaw and others after the Second World War than it was following the collapse of Communism. It required much less debate, and it was easy to agree on and rally popular support behind reconstruction after the destruction that the Second World War brought to these cities. It was much more difficult to rally support behind the destruction of Soviet structures following the fall of the Berlin Wall and the dissolution of the Soviet Union. In Berlin, for example, the question of whether or not to destroy the Palace of the Republic to rebuild the Berliner Schloss was highly controversial at the time. Eastern Berliners, who were filled with feelings of Ostalgie (nostalgia for the times of the GDR) and who might have not necessarily had a negative connotation associated with the Soviet times, believed that the destruction of the Palace of the Republic was a daring attempt by the Wessis (the term used to refer to the Germans of the BRD) to get rid of something so essential to the Socialist mission, and reinstitute in its place the values of the Prussian Kings that eventually were used by the Nazis to justify their crimes. This debate stalled the destruction of the Palace of the Republic, but it did not stop it, and the construction of the Berliner Schloss began soon thereafter.

The Berlin Palace in May 1945 https://www.berlin.de/aktuell/ausgaben/2015/juni/berliner-ereignisse/mai-45-fruehling-in-berlin-307113.php 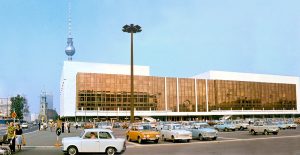 Palace of the Republic in the 80s. http://www.failedarchitecture.com/berlins-palast-der-republik/ 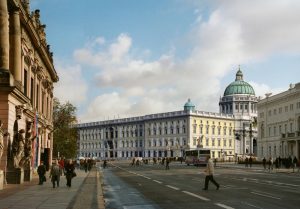 Computer projection of what the Berliner Schloss would look like once construction is completed http://www.skyscrapercity.com/showthread.php?t=1390928

Those who argued for the Berliner Schloss believed that it was an innate symbol of the memory of Berlin’s imperial past. The Schloss was Berlin and Berlin was the Schloss. Those who argued against it believed that the Palace of the Republic also held historical significance and importance to those who lived through the times of the GDR. The fact that we see no traces of the Palace of the Republic today speaks volumes of the memories that the Berliners chose to uphold and of the image they wanted to portray of Berlin to its visitors. No longer are buildings designed and created for the purpose of advancing collective living and emboldening the Socialist mission. No longer are they built for the citizen or the state. In the Post-Socialist era, cities were, as Huyssen argues, created for the tourist.

I only agree with Huyssen because Berlin’s history did not simply encompass its imperial past, and so resurrecting an imperial structure in place of a socialist one seemed odd.  As Liebskind said in his interview with Wagner, the GDR housing of the Alexander Platz is “as much a home to the people of the GDR and so it is part of the history of Berlin just as much as the old streets of Berlin are part of that history.” It seems unfair to dismiss and erase forty years of Berlin’s history for the sake of regurgitating its grand imperial palaces and cute old towns that would eventually make for a better snap chat story but would destroy the essence of Berlin not only as an old city, but as one that has witnessed, as Huyssen outlines, empire, war, and revolution; democracy, fascism, Stalinism, and the end of the Cold War. All of these facets play into the memory of Berlin as a city and of Berliners as its inhabitants.

The memory of space is not one dimensional. It does not start and end with those who designed it. It is built and constructed across generational understanding of the space and everything it encompasses. It is perceived through the political climate of the time, and it is unfair to assume that one memory holds more significance and importance than another. Much of the Post-Socialist construction in Berlin favored a portrayal of Berlin as an image rather than a multi-faceted, multi-dimensional story that lives in the minds of those who live in Berlin and those who visit it.

3 Responses to The Forgone Memory of the Socialist City