The Importance of Blats in Soviet Everyday Life

This week’s readings covered Soviet and post-Soviet citizens’ various difficulties in everyday life. The materials include people’s trouble in obtaining necessary goods in Soviet era and the emergence of New Russians such as entrepreneurs, who threatened people in the ill-structured market economy due to the rapid privatization after the fall of the Soviet Union. Here, I would like to focus on the difficulties in obtaining food and goods in the late Soviet era and how people reacted to this situation.

Bukovskii, who had been freed from Soviet camp and reached the West (Zurich), shares his instant feeling, “You see, Soviet people spend a great part of their lives in endless cares, how to get hold of, how to obtain, how to dig out the most elementary things. What trickery, what resourcefulness is needed to do things that over here take only five minutes.” (Cited in Humphrey’s article, p. 43)

This represents the clear difference between the capitalist city and socialist city. The life in socialist cities was much harder in terms of obtaining necessary goods. Kotkin describes it well in his book ‘Steeltown.’ In Magnitogorsk in the fall of 1989, there was always a gigantic queue of people waiting for hours in hope to buy sausages or cheese. Kotkin further provides a vivid picture of this, citing one of the customers in the queue, “My friend advised me, get what you can, soon there won’t be any. / Why am I buying so much? Because there will be none.” 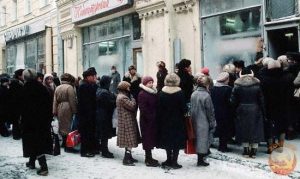 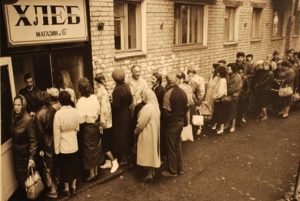 In the Soviet era, as the centralized economy failed to meet the needs of the people, there were constant shortages of goods, which led to the difficulty for people to obtain even very necessary goods, mainly food. Therefore, many people had to rely on networks of acquaintances, family and friends to obtain goods. As Alison Stenning and Adrian Smith describe in “Domesticating Neo-Liberalism,” in the city Nowa Huta since shopping was commonly characterized as an unrewarding and difficult practice, many households received food produced by friends and family “through friendship we help each other, simply.”

In fact, especially during the Soviet era (and also in post-Socialist era) using networks of acquaintances and back doors were very popular to respond to this situation of having difficulties in obtaining goods. Humphrey very briefly mentions the term “blat” (p.44) and it is a useful term for describing this phenomenon.

Here, I present the definition of blat by Ledeneva, the author of a book “Russia’s Economy of Favours,” which is devoted to the concept of the blat throughout the book. According to Ledeneva, blat is the use of personal networks and informal contacts to obtain goods and services in short supply. In Soviet era, when there were constant food shortages, blat flourished and it became vital to the population and to the functioning of the Soviet system.

This photo is Natalia’s blat network from Ledeneva’s book (p.118). Due to the shortage of goods, she used her blat network to meet her various types of needs from food to having an access to the healthcare clinic. It clearly represents how Soviet people used blat to get things done where it was almost impossible to do so by oneself due to the dysfunctional system. 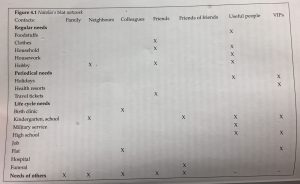 (A photo from “Russia’s Economy of Favours” by Alena Ledeneva, p. 118)

Similarly, this chart below is a weekly blat chores of a Soviet person from Ledeneva’s book as well. The left-hand column is the list of chores to be accomplished and on the right are the names of the people who helped the author of this blat list to circumvent the immense complexities presented in Moscow by each one. Similar to Natalia, this person used his blat networking to obtain goods. 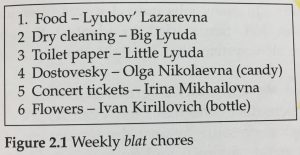 (A photo from “Russia’s Economy of Favours” by Alena Ledeneva, p. 45)

As I presented, in the Soviet era, blat networking flourished and it was an essential way to get through all the difficulties to get tasks done. However, some people might argue that even though the purpose of blat is to help people, by doing so it deprives others of rations and opportunities. The next person who is waiting to obtain that certain good can be deprived his turn only because he does not have an access to the blat circle. Therefore, it cannot be regarded as only a positive cultural phenomenon.

However, as Ledeneva argued, I believe that blat is kind of white corruption. It is different from just bribery or corruption because decades of centralized economic systems made it almost impossible to obtain goods or food at the needed time. In addition, as you might have noticed in the weekly blat chores above, the author of that blat list rewarded Dostoevsky with a candy and flowers with a bottle, which cannot be considered as bribery. This shows that the network operates “through friendship [as people] help each other, simply.” The blat was how the society worked in that period and it made a positive contribution to the society and people’s lives. When everything was out of stock and it was almost impossible to get done, only the blat allowed individuals to help each other.

Lastly, I would like to end this blog with a cartoon from Ledeneva’s book. The blat was deeply submerged in the life of people in Soviet times. The one man who is packing clothes in the photo does not worry about starting his new life in Moscow because he will have his family (blat network) who can help him obtain permission for him to stay in Moscow. Although blats might have disadvantaged some people out of blat circles, they look like they operated as one of the best few options. 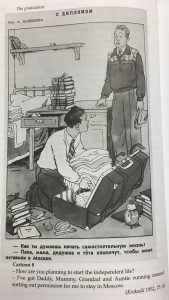 (A photo from “Russia’s Economy of Favours” by Alena Ledeneva, p. 126)

p.s. Thanks to “Law and Disorder” class by prof. Smith last year!

5 Responses to The Importance of Blats in Soviet Everyday Life