How did Stalin build cities?

Bolsheviks seized power after the October revolution and formed the Soviet Union with the dream of constructing the first socialist country in the world. As Stalin took power following the death of Lenin, there was a national plan to build cities, which could realize socialist ideas and utopian dreams. During the early 1930s, a number of cities across the country were built from scratch. Two books, Khrushchev: The Man and his Era by Taubman and Magnetic Mountain by Kotkin describe vividly how the cities were constructed through the eyes of people and their lived experiences.

Although the two stories are set in different cities – Moscow and Magnetagorsk – there are many features that they hold in common. Not only were the cities built in a chaotic and inefficient manner under weak leadership, but the city planning was also aimed towards satisfying and fulfilling the state’s purpose, not the people’s needs.

In the early 1930s, Khrushchev was in charge of supervising the construction of a new metro in Moscow. Kruschev recalls, “When we started building, we had only the vaguest idea of what the job would entail. We were unsophisticated. We thought of a subway as something almost supernatural” (Taubman, p 94). In many cases, not only was there not a single professional staff member, but one department was responsible for supervising hundreds of institutes. Magnitogorsk was not an exception. Staff were often ordered to build barracks just a couple of days before the arrival of approximately 40,000 people. (Kotkin, p 81) Additionally, in Magnitogorsk every amendment to the city design, no matter how ostensibly trivial, ultimately required approval from Moscow, which made city building inefficient and slow.

In addition to the weaknesses of the leadership hierarchy and system, the fact that city planning was aimed towards satisfying the state’s purpose, rather than the people’s needs, was noticeable in both of the two cities. Taubman describes that the metro, which was to be the most expensive construction in Moscow at that time, was not built because the people of Moscow needed it, but because it served larger state purposes. (p 94) Since the metro’s deep tunnels and stations could be used as bomb shelters in wartime, Stalin was excited to show the country’s advancements to the world. On the other hand, constructions, such as housing and sewage services, which were indeed needed for people, were neglected and they lagged badly behind. 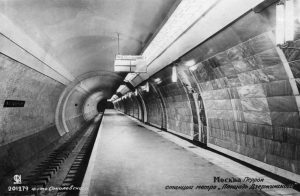 The state’s purpose is the most important factor when it comes to city building in Magnitogorsk as well. However, here, the state’s purpose is more specific and more ideologically-oriented. Turning peasantry and ordinary workers into the new ‘Soviet man’ and initiating collectivization was one of the most important state aims in Stalin’s era during the 1930s. Stalin believed that it could be achieved through massive collective construction projects, such as building dams. According to Stalin, the “Magnitogorsk Dam” was a school where hundreds of youths could become loyal partisans and truly recognize the miracle of Bolshevism through labor. Therefore, “heroes” among workers were decorated, busts of Lenin and Stalin were made, and speeches were given after the dam was completed. The state’s purpose in assimilating the peasantry under the banner of socialism is well reflected in its city planning in Magnitogorsk. 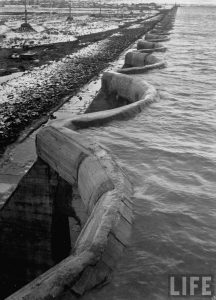 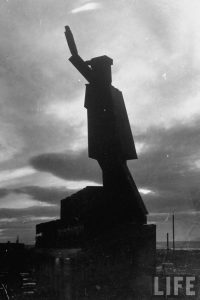 However, again, other constructions, such as housing, sewage, heating, electricity, and other essentials for the population were neglected (p 129). For example, the majority of Magnitogorsk’s inhabitants took up residence in tents and waited their turn to move into one of the hundreds of barracks being built. However, the planned temporary barracks became the predominant form of shelter.

People sleep in tents in Magnitogorsk

Reading Khrushchev: The Man and his Era and Magnetic Mountain reminded me of the piece by Anna Litveiko, who described the Bolshevik revolution as a wonderful holiday and she felt completely free for the first time. (p 50) Litveiko was happy imagining a beautiful life under communism where workers would build a good proletariat life and there would be enormous public buildings, including huge cafeterias, laundromats, day care centers, and kindergartens. However, it seems like the new city planning in Stalin’s era was different from what she had expected.

If Litveiko was one of the people who was excited to move to the new “modern” city of Magnitogorsk (as it was advertised in press), where she was introduced to tent-life and the hard labor conditions. I am wondering how she could have responded. Would she still be happy to do all those things, while still dreaming of a better future? Or would she be disappointed with the new city, turning away from the state’s orders, and earn the label of class enemy? Or… since she was already one of the leaders of the Bolshevik revolutionary movement in the end of her piece, she might work as one of the weak bosses or one of those busy thinking  about how to transform the peasantry into better soviets in order to advance the socialist crusade. Though I have no exact answer for this, one thing I can say is that city building across the country in Stalin’s era was conducted in a chaotic way under weak management, while workers’ basic needs were neglected.

2 Responses to How did Stalin build cities?