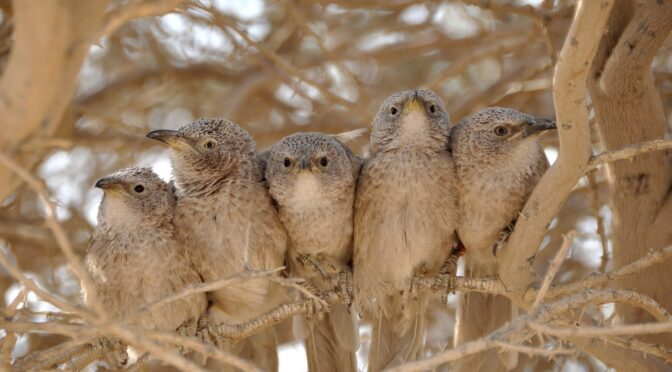 By Will McCreadie and James Giordano PhD

The Arabian Babbler bird is unusually generous; babblers sing and dance together, give gifts to each other, groom one another, and even compete fiercely for the privilege of helping their peers.  They feed each other’s young and vie to guard the territory while the others in their group forage.  As a species, they exemplify traits of altruism – acts of benefiting others – along a spectrum of egoism (i.e.- eliciting some relative benefit to self). Within this spectrum is competitive altruism, wherein agents act in ways that appear “selfless”, but which enable their own gain by affording some advantage within and among others. As well, there is reciprocal altruism, which entails giving in order to obtain something in return. These are not mutually exclusive; altruistic behaviors often send strong social signals that can boost the giver’s reputation.  This can lead to upward mobility within a group, and augment self-worth and well-being, as sustained by their position and supportive actions of the group, in the future.

As we have noted, every altruistic act has an egoistic component. It’s how brains work: we sense and perceive the world (and our place and status within it) through the subjective lens of self-embodiment. On some level, whether subtly or overtly, we weigh our choices and decisions for action upon the consequences that will be incurred (for ourselves) in and along temporal scale (i.e.- “Being good to others affords some good for me now and/or good for me later”, etc.). It seems that competitive giving can result in more prosocial behavior than anonymous altruism alone. Competitive altruism plays an significant role in human generosity, and allows for a deeper understanding of how people are responding to COVID-19. In turn, this may allow better incentivization(s) for altruism. Such incentives characteristically appeal to the key factors of social signaling: visibility, credibility, and social resonance.

For generosity to be a social signal, it must be noticeable – or at least recognizable. This helps to explain why very few donations are anonymous.  A 2019 study of GoFundMe data revealed that only 21% of donations were made anonymously, and the median anonymous donation was less than the median attributed donation.  This is consistent with prior work that has shown that people tend to be far more generous when their giving is public. Clearly, visibility of some form and level plays a critical role in most peoples’ giving.

The ethologist Amotz Zahavi was among the first to propose that an altruistic act can be a social signal, and this precept was a foundational element of what he called the handicap principle.  In this framework, making a sacrifice signals evolutionary fitness because it is a costly (and therefore hard to fake) sign that the giver is “well-off” enough to be generous. Thus, more significant acts of altruism send stronger – and better – social signals.

Social norms also contribute to the valuation of particular signal. In the short- or long-term, the signal must convey something of benefit, both to the group and the giver about what is given, as well as what will be perceived as the relative value of the identity, role, and/or place of the giver within the social ecology, in order to make the signal of the altruistic act(s) worthwhile.

There are two reasons to care about the spectrum of altruism as we fight the pandemic.  First, it explains acts of giving that might seem otherwise irrational. Most charitable behaviors appear to make little “egoistic” sense, because the cost of the action(s) is, by definition, to the giver, and not explicitly recouped. In other words, the proverbial “juice” does not seem to be “worth the squeeze”. But it depends on what juice, how much, and who’s savoring it.  Both reciprocal and competitive altruism expand constructs and contexts of costs and benefits to include status.  While there’s an initial cost to giving, the benefactor can increase their social status if the signal is visible, credible, and resonant.

Second, competitive giving can result in better outcomes for society as a whole. If one person donates an hour of their time to fighting the virus, someone else may contribute an hour and a half, escalating the social standard for acceptable contribution.  If these signals are visible and valuable, someone else – who perhaps wouldn’t otherwise make a contribution – may step in, feeling some socially related self-referential impetus to be at least as good as their peers. Scaling this dynamic across millions of people can radically augment our response to the virus.

Masks are one of the most economically attractive coronavirus responses, because they offer considerable benefit for minimal cost. It’s been projected that if 95% of people wear a mask in public gatherings of any sort, 67,000 American lives could be saved by December 1st.

However, mask wearing is still far from universal. It’s been shown that men are particularly resistant to wearing face coverings, and are more likely to feel that masks are “uncool” and “signs of weakness”.

Competitive altruism could play a role in mitigating or reversing this trend. Masks are already visible and reliable signals (it’s hard to fake wearing one), but it will be important, and may be necessary to establish mask-wearing status competitiveness in order to prompt new social norms.

As we’ve noted before, it’s time for masks to be considered aspirational and ‘cool’.  Normalizing masks as an extension of personal identity and benevolent intent increases their social resonance. This sends signals that make it more “competitively desirable” for people to wear masks in public amidst the ongoing COVID crisis; establishing mask-wearers as “crusaders against COVID” and contributory to social welfare. In this way, they take on a heroically giving aspect to their social identity. And, if masks are considered fashionable, people can seek status by choosing expressive materials and creative designs. The more perceived effort someone puts into their mask habits (even if that perception is one of “I ordinarily would never wear a mask, but for the good of others, I will”), the more robustly reliable the signal, and the greater the potential for positive competition and its beneficial social effect(s).

If people can compete to protect each other (i.e.- competitive cooperative altruism), the greater the common good. Indeed, we can gain considerable insight from the past: Aristotle was right – doing good for others is rewarding for oneself. As we fight the pandemic, we should stop babbling about wearing or not wearing a mask, and embrace masks – and our actions for others – as a form of positive self-expression, with attributes for both ourselves and society.