The theme for the Modernities Working Group in 2014-2015 is Ruin.  “Ruin” describes a historical process as well as its material results. In what forms do the catastrophes of the modern –slavery, war, environmental degradation– survive in the present?  How has past disaster been imagined, preserved, and contested?  What is the future of ruin? 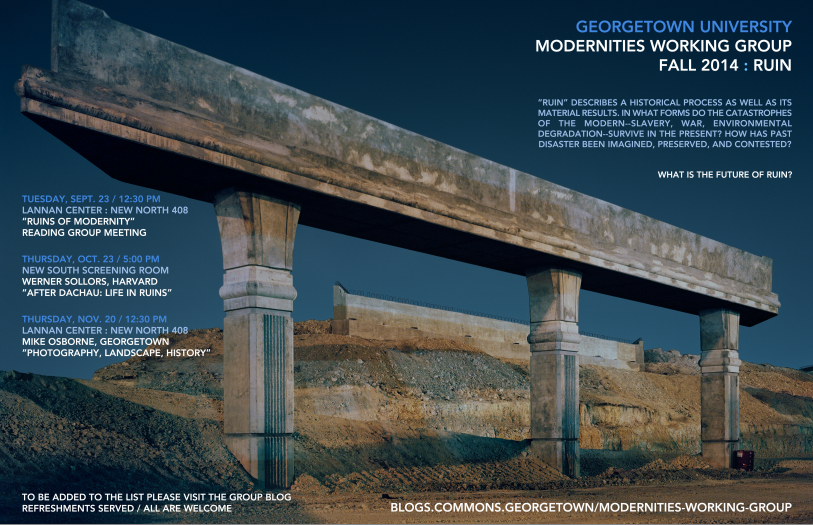 We are pleased to announce the following events for Fall 2014:

For this initial meeting of the term we will discuss the following short texts and excerpts.  Participants in the discussion are encouraged but not required to have completed the reading.

“After Dachau: Life in Ruins”

Werner Sollors is Henry B. and Anne M. Cabot Professor of English Literature and Professor of African and African American Studies at Harvard University. His most recent book is The Temptation of Despair: Tales of the 1940s (2014). In 2012 he prepared an expanded centennial edition of Mary Antin’s The Promised Land and a Norton Critical Edition of Charles W. Chesnutt’s The Marrow of Tradition. With Julia Faisst and Alan Rosen he coedited David Boder’s collection of interviews from 1946, Die Toten habe ich nicht befragt (2011). Coeditor with Greil Marcus of A New Literary History of America (2009), and with Glenda R. Carpio of African American Literary Studies: New Texts, New Approaches, New Challenges (2011), his major publications include Beyond Ethnicity: Consent and Descent in American Literature and Culture (1986), Neither Black nor White yet Both: Thematic Explorations of Interracial Literature (1997), and Ethnic Modernism  (2008). He has written essays on ethnicity, pluralism, migration, multiculturalism, and numerous individual authors, among them Olaudah Equiano, Mark Twain, W. E. B. Du Bois, Charles Chesnutt, Mary Antin, Jean Toomer, Zora Neale Hurston, Henry Roth, Richard Wright, Ed Bullins, Adrienne Kennedy, Amiri Baraka, and Charles Johnson. Among his edited books are The Invention of Ethnicity (1989), The Return of Thematic Criticism (1993), Theories of Ethnicity (1996), The Interesting Narrative of the Life of Olaudah Equiano (2000), Interracialism (2000), The Multilingual Anthology of American Literature (2000, with Marc Shell), Charles W. Chesnutt’s Novels, Stories, and Essays (2002), An Anthology of Interracial Literature (2004), Frank. J. Webb, Fiction, Essays & Poetry (2005), and Alexandre Dumas’s Georges (2007). His John Harvard Library edition of Mark Twain’s Pudd’nhead Wilson is forthcoming. Recently he contributed to Daedalus, The Chronicle of Higher Education, Amerikastudien, Comparative American Studies, The Journal of Ethnic and Racial Studies, and the volumes The Harvard Sampler and The Turn Around Religion. He is the recipient of Fellowships from the John Simon Guggenheim Memorial Foundation Fellowship and from the National Endowment for the Humanities. He was awarded the Constance Rourke award for the best essay in American Quarterly and the Everett Mendelsohn Excellence in Mentoring Award at Harvard University. A corresponding member of the Austrian Academy of Sciences and of the Bayerische Amerika-Akademie, he was elected Fellow of the American Academy of Arts and Sciences in 2001 and of the Academia Europaea in 2012.

Combining a documentary style with sometimes cinematic qualities, Mike Osborne’s photographs address the reality and fantasy of specific, sometimes charged places. Exploring subjects such as architecture, public space, landscape, and technology, his work reflects his interest in the perpetual flux of the contemporary world, which can be observed in projects such as Enter the Dragon (2006-2008) in Beijing, Shanghai, and Taipei; Underground (2009-10) in Stuttgart, Germany; and Floating Island (2012) in the Great Basin Desert town of Wendover, Utah. His photograph appears on the Modernities Group poster and website this term. 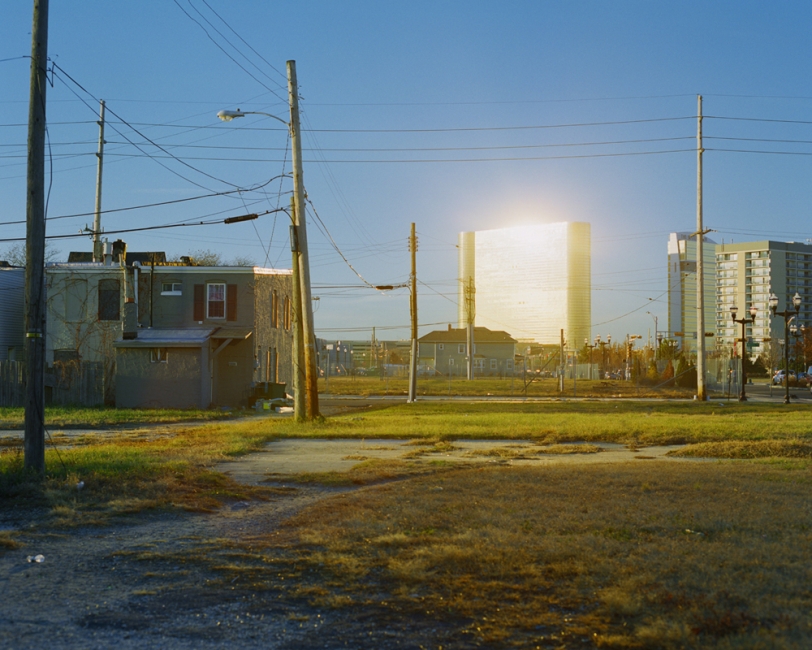 Nathan K. Hensley is Associate Professor of English at Georgetown University; he works on nineteenth-century British literature, critical theory, and the novel.
View all posts by Nathan Hensley →
This entry was posted in Uncategorized. Bookmark the permalink.