What can I add to these representations?

“Night Watch in the City of Boston”

This link here will bring you to an article found on JSTOR titled “Archibald Macleish (1892-1983), ‘Night Watch in the City of Boston.'” Macleish, who was a Harvard Boylston Professor of Rhetoric and Oratory, commemorated the American Bicentennial in Boston with the poem ‘Night Watch in the City of Boston.’ The poem focuses mostly upon the birth of New England and the area’s connection to God, exemplified by the “city on a hill” reference made in the third stanza. Closer to the end of the poem, Macleish stops calling Boston the “city of God” and instead calls it the “city of man,” showing his emphasis upon the working man in Boston and his role in the identity of the city. Overall, the poem — which was spoken in 1975 — makes an effort to remember the events of the 18th-century and celebrate Boston as a city that was central to declaring independence from Britain.

This reminds me of Detropia because in the documentary, many of Detroit’s residents are extremely resistant to leaving the city and their jobs because Detroit is their home and always will be. They value not only their personal history with the city, but the history of the city a whole. This may be an extremely obvious facet of this representation because it’s honoring a historical event, but I still believe it’s important to draw a connection between the poem and Detropia because it reveals an interesting correlation between Boston and other cities that are struggling (Detroit with the economic crisis, Boston with the terrorist attack).

“I am the Locker Room Guy”

Unfortunately, the YouTube video below does not explicitly correlate with my theme of “Boston Strong.” However, it is deeply relevant to my commentary on the representations below. I stated that I want my scrapbook and presentation to resonate with those not only who live in Boston today, but grew up there, have family there, or possess any other close emotional ties with Boston. Even though all the celebrities featured in the video below have found success in Hollywood, Los Angeles, or other big cities, it’s clear that Boston will always be home. Take a look at how they take the fall for the “Deflategate” scandal which involved accusations against New England Patriots star quarterback Tom Brady. It’s certainly a comedic approach to the issue, but also sends a crucial message about how home will always be home, no matter who you become or where you are.

Saying that the motto “Boston Strong” has been commercialized would be an inaccurate description of how professional sports teams have absorbed the saying into their philosophies and their commitments to the city’s fans. Like any other uniting force — whether it be history, shared tragedy, or mere geographic location — Boston sports serve as a force that brings people together regardless of the context or time period. However, in times of great need — like the aftermath of the Boston bombing — these institutions can become an even more powerful source of union and community.

This was the case after April 15, 2013. Take a look at some examples of how “Boston Strong” still manifests itself within Boston professional sports teams today, especially in the teams’ social media presences. 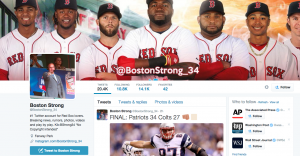 In the “Plans” section of my digital scrapbook, I outline that I want my audience to be the inhabitants of Boston (as opposed to tourists and other ‘outsiders’). However, I also want my final presentation to ultimately cater to all people who have ties to Boston, regardless of where they currently reside. These social media representations and their connection to Boston sports teams display how urban representations can have a widespread impact. 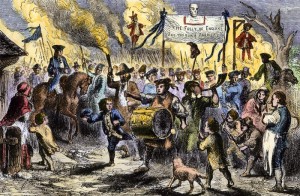 This artistic work, which is meant to depict a riot following the passage of the Stamp Act in the mid-1700s, shows the anger and distraught sentiment experienced by the inhabitants of Boston. This specific drawing appeared in the 1880 collection of drawings called the Historical Scrapbook. I think this is a great representation because it aligns with the theme of “Boston Strong” in the same way as the image with the text “The Wrong City to Mess With.” They both show that making Bostonians angry will not result in passive behavior — they will actively defend their city and the people that live there. The fact that this painting was created over 100 years after the actual event depicted shows that the Stamp Act riots still struck a chord with those who chose to represent Boston. In my mind, this demonstrates that the resilience of the individuals who rioted plays a monumental role in how people ultimately chose to represent the city as a whole.

“We Don’t All Live in Boston, but Boston Lives in Us”

Watch the above video to get a sense of how the people involved in the “Boston Strong” movement connect representations of Boston with the city’s history drawing back to the American Revolution.

“18 Things You Should Never Say to a Bostonian”

The inhabitants of every city pride themselves on their city’s unique characteristics. Even if those qualities may not be desirable to everyone, for Bostonians, its unique qualities make it the city that it is. Here’s a Buzzfeed article that goes over some of the things you should never say to a Bostonian who’s proud of their city.

“The Wrong City to Mess With”

In response to the Boston bombings, the idea that Boston is the “wrong city to mess with” became extremely prominent. This particular representation combines that mentality with the stars and stripes of the American flag, which exemplifies Obama’s statement below that the “American people will be with them [the people of Boston] every single step of the way.” 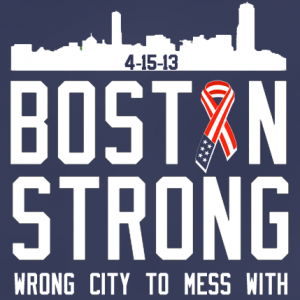 “Today is a holiday in Massachusetts: Patriots Day. It’s a day that celebrates the free, and fiercely independent spirit that this great American city of Boston has reflected since the earliest days of our nation. It’s a day that draws the world to Boston streets in a spirit of friendly competition. Boston is a tough and resilient town. So are its people. I’m supremely confident that Bostonians will pull together, take care of each other, and move forward as one proud city and as they do, the American people will be with them every single step of the way.” – President Barack Obama

This representation is extremely powerful, especially for me. Seeing President Obama honor Boston and emphasize how strong the people of Boston resonates with me deeply. This representation simply emphasizes my idea that Boston is a city that’s truly “Boston Strong,” and have exemplified this time and time again throughout history.

Below is an excerpt from the song “Boston” by the band Augustana, which was released in 2005. While the song does not mention specific characteristics of the city of Boston, this particular representation highlights themes that we’ve discussed so far in class; specifically, isolation and individual narrative. The lyrics clearly convey the idea that the point of moving to a new city can mark the beginning of a new life, and while the lyrics seem to value this possibility, the idea of no one knowing the singer’s name is a clearly indication of isolation. Furthermore, this song emphasizes the idea of individual narrative by describing the singer’s travels and reasons for moving to Boston. Lyrics to the full song can be found here, but the excerpts below are the most powerful. I don’t think this representation is particularly relevant for my goals for my final project, but I think it’s a valuable addition to my digital scrapbook because it shows that there is a diverse set of representations of Boston existent across multiple platforms.

I’ll get out of California,
I’m tired of the weather,
I think I’ll get a lover and fly him out to Spain…

Oh yeah and I think I’ll go to Boston,
I think that I was tired
I think I need a new town to leave this all behind…

While this representation provides an insightful look at how isolation can actually be a positive in an individual’s life, I believe that this representation does not serve my purposes for this multimedia project. The lyrics from “Boston” make Boston synonymous with any other city, whether or not it’s in Spain or Massachusetts. I want the representations I pull ideas from to set Boston apart from other cities as a unique location — not create a depiction of Boston that could be the same for any other city.

“The Background for Emerson’s ‘Boston Hymn'”

A scholarly article written by Carl F. Strauch, a former professor of English at Lehigh University, described the historical context of Emerson’s ‘Boston Hymn’ that was read in the Boston Music Hall in 1863. (Note: this hymn is not the same as the poem titled ‘Boston’ below). The permalink to Strauch’s article is accessible here. One interesting component of this representation is that in Emerson’s poem he mentions men who work for the state, in schools, and in church. By doing this, Emerson shows that each of these types of individuals is relevant when discussing Boston. This connects to some of the larger questions we have in this course: Who counts in a city, and which individuals’ narratives are most important in a representation? I think at this point we’ve concluded that it’s important to bring all types of people into representations, and Emerson does this here.

Renowned  poet and essayist Ralph Waldo Emerson was born in Boston, Massachusetts in 1803. While Emerson’s most famous works include the 1863 essay Nature, Emerson also wrote a poem titled “Boston” in the mid-1800s. The full poem can be found here, but I will include specific passages below that stand out as powerful forms of representation. Because Emerson hails from Boston and thus utilizes a subjective view of the city in this poem, it draws back to our class discussions on the “city of fact” and the “city of feeling” and how those who come from a certain city often employ a unique form of representation that is tied to personal experience.

The rocky nook with hilltops three

Looked eastward from the farms,

And twice each day the flowing sea

Took Boston in its arms;

The men of yore were stout and poor,

And sailed for bread to every shore.

Has lords enough and more;–

We plant and build by foaming seas

A city of the poor;–

For day by day could Boston Bay

The noble craftsmen we promote,

Disown the knave and fool;

Each honest man shall have his vote,

Each child shall have his school.

A union then of honest men,

What care though rival cities soar

Along the stormy coast:

If Boston knew the most!

The townsmen braved the English king,

Found friendship in the French,

And Honor joined the patriot ring

Low on their wooden bench.

The sea returning day by day

So let each dweller on the Bay

Fold Boston in his heart,

Till these echoes be choked with snows,

Or over the town blue ocean flows.

After close reading this poem, we can come to multiple conclusions. First, a major theme is that the events of the past have a monumental impact on the present; specifically, Boston’s history in the Revolutionary War and its role in the fight for independence. Second, Emerson clearly is attempting to push through certain ideas about the people of Boston. The values of honesty, hard work, friendship, and community appear several times throughout the poem. Third, Emerson also focuses upon the beauty of the city and its physical appearance. Overall, this poem effectively represents Boston as a location of historical significance, a community of hard working and honest people, and a city characterized by the beauty of the seaside and the Boston Bay.

One thought on “Representations”