Reflecting on the walk from Georgetown to Foggy Bottom 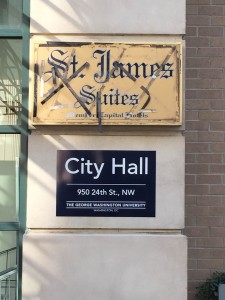 Walking out of Georgetown’s campus, neighborhood, and main drag is a fairly easy transition. The campus, its academic buildings, and its students spill out onto the surrounding streets and cobblestone sidewalks. The townhouses on 37th Street become more elaborate and luxurious the farther you distance yourself from campus, and the affluence of the Georgetown neighborhood is reflected on M Street by the plethora of high end stores, boutiques, and restaurants.

There are certain types of people guaranteed to clutter the sidewalks; a young woman briskly walking with a yoga mat in tow, an older woman adorned with lavish coats with Madewell and Michael Kors bags in hand, a homeless man sitting on a dirty stoop, a Georgetown Cupcake bag here, a Baked and Wired bag there. A Georgetown sweatshirt on every other block. These are guarantees in Georgetown, and as a junior here, I’ve come to expect them.

After venturing from Georgetown into the Foggy Bottom neighborhood, things change In Foggy Bottom and on the George Washington University Campus — the two are fused into 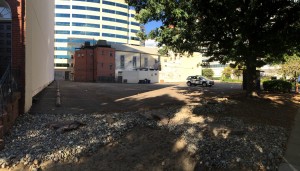 one area, which already shows a stark difference between Georgetown’s secluded campus compared to its separate main drag — you will see sets of high rises on one block and a surprising piece of green space on another. You will see a dilapidated building that appears to be the remains of a beautiful church; and then you will see a glassy, modern academic building. You’ll see a TGI Fridays, and then you’ll see John Quincy Adams’ historic home. The area kept me guessing, and even though I wanted to obtain a solid grasp of the neighborhood’s culture and its inhabitants’ lifestyles, I had a hard time doing so. 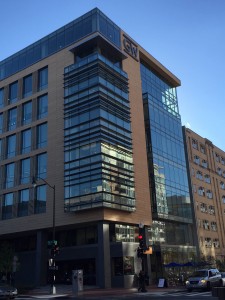 If we were to search for an area in DC that was Georgetown’s virtual opposite, Foggy Bottom would frankly not be it. While there is much more disorganization in Foggy Bottom, blurred lines between George Washington’s campus, a mix of demographics, and slightly confusing urban planning, it is not too different from Georgetown. But, it is absolutely different enough that upon walking around Foggy Bottom and observing its atmosphere on a standard Friday afternoon in October, I was exposed to a new DC dynamic that the Georgetown bubble deprived me of.

This link will take you to the “Washington D.C. Interactive Map System,” an interactive online map accessible to the public. This map offers a comprehensive and engaging virtual experience by providing users with a long list of categories of places they may want to visit in D.C. The categories are: What to Do, Where to Eat, Where to Shop, Where to Stay, How to Go, Accommodations, Attractions, Dining, Museums, Performing Arts, Shopping, Sports and Recreation, Transportation.

Clicking one of these categories will cause several red dots to fall upon the map of DC, all of which signify locations such as restaurants, museums, hotels, metro stops, movie theaters, and so on. Clicking on one of these red dots will cause the map to zoom in on that location, and a brief blurb of information about the location including its address and phone number will appear.

Evidenced by the clickable categories on the map, it’s clear that this particular interactive map is geared toured the traditional D.C. tourist. Most of the clickable red dots happen to be located in NW D.C., the area that houses The White House, the National Mall, the monuments, many museums, shopping centers, and a few of D.C.’s universities — Georgetown included.

After spending time clicking around on the interactive map system and observing its many features, I conclude that it is an incredibly useful tool. It provides extensive information about many areas in D.C. and can be hugely helpful for an individual trying to find their way around the city while on a business trip or vacation.

However, this interactive map system only represents so much of D.C. In class, we have frequently discussed whether or not representations can accurately reflect the experience of all of those who live in a city: the rich, the poor, the well-educated, the working class, the famous, the invisible. This map is a perfect representation of D.C., but only for an individual who wants to see the best parts of the city and has the money to do so. When reading Zukin’s piece, we questioned how a city becomes authentic, and what it means for a city to be authentic. While this map may indeed accurately display locations in D.C., its clear tendency to only show certain aspects of the city desirable to tourists decreases its authenticity.

Today, we walked from Logan Circle to DuPont Circle in an effort to understand Sepha Stephanos’ experience when he does the same walk in The Beautiful Things That Heaven Bears. By walking from Logan Circle to DuPont and observing our surroundings, we were able to both get a better grasp of Stephanos’ point of view, as well as witness the differences those areas have undergone since the publication of The Beautiful Things. 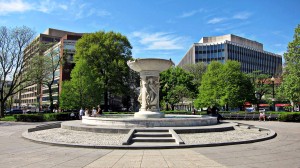 One of the main ideas of the book is the concept of gentrification and how the Logan Circle area began transforming from a neighborhood for predominantly minority people to one for a larger number of upper and middle-class white people. Today, Logan Circle is first and foremost an area of characterized by beautiful mansions and expensive real estate. There are barely any commercial buildings in the immediate Logan Circle area, and its statue and park in the middle are well-maintained and enjoyed by families, couples, and children. This contrasts greatly with the type of individuals who Stephanos noted were in Logan Circle on his walk: homeless people, prostitutes, and drug dealers. 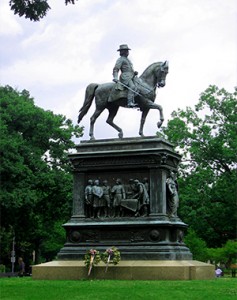 Moving from Logan Circle to DuPont Circle, it’s easy to see the remnants of what Stephanos observed. The skinny trees he described have grown, but still line the streets in the same way they did back in the 90s. Some of the buildings Stephanos describes are still there, and some are gone. Interestingly, DuPont Circle is much more commercial, busy, and less glamorous than in The Beautiful Things. It seems that after walking Stephanos’ route, we saw many similarities between the Logan Circle and DuPont Circle that he described, but also several differences.

One thought on “Explorations of D.C.”