Yesterday, March 3oth, at the American Association for the Advancement of Science (AAAS) in downtown DC, I had the privilege to join other scholars in conversation about the latest research within the Science & Technology Studies (STS) field at the ST Global Conference (12th Annual).

I was on the Human Rights, Science and the State panel along with two other scholars: (i) Philip Egert (phD c candidate) from Virginia Tech, who presented the talk “An exploration of the Relationship Between Sxcual Gender-Based Violence and Disasters,” and (ii) Steve Casazza  (MA Candidate ) from George Washington University, who presented a talk called “Army of Automatons: Where Science fiction becomes science fact.”

My talk was entitled, ” Indigenous Homelands: “closing the gap” with Two-Way networks.” It explored the multiple tensions between Australia’s reconciliation campaign, the Australian government’s development agenda, and local indigenous development practices within the Northern Territory, Australia.  I used network theory to explore new frameworks for change. You can view my presentation here. 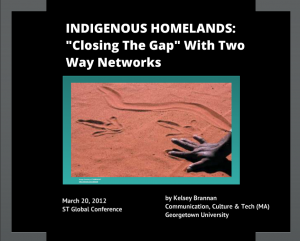 Professor David Ribes, one of my advisors at the Communication, Culture, & Technology (CCT) program at Georgetown, was the moderator for the panel. He did an excellent job finding synergies between three talks that were not completely different topics. If STS ever met poetry – David Ribes, achieved it. His follow up question beautifully revealed how each of our talks attempted to “open the black box” of technology, which is the idea that we must uncover controversies that are often hidden from view and explain how artifacts are chaped by and connected to larger soci-technical processes (e.g.  role of designer, users, etc). In the case of my talk, the “black box” was the way in which Australia’s reconciliation campaign tends to cover up the deeper rooted political problems through cultural projects that promote harmony between indigenous and non-indigenous Australians. I got some great feedback from several scholars and I hope to publish this with the Australian Aboriginal Studies Journal soon.

The entire conference pushed scholars in the field of STS to change how we think about development in a world that is now suffering from overpopulation, decentralization, and multiple digital divides. It it is time that new transformational development policies and justice frameworks emerge that account for these new contexts.