This past Saturday (4.16.12) I presented my paper, “Grindr: Surveying & Geolocating Sexiness” at the Theorizing The Web Conference in College Park (UMD). 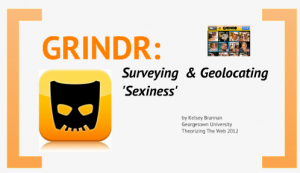 Drawing from Sigmund Freud’s book Civilization and Its Discontents and Michel Foucault’s concept of space and power, this paper examines how Grindr, an all gay male location-based social network application for mobile phones, is altering the space and time of sexual relationships and the way users signify or survey their sexuality. Grindr, as a heterotopic space of otherness, is able to surpass the limits of Victorian ideology by liberating sex from the confines of the home. However, it also controls and represses the individual’s desire for physical sex through the censorship imposed by the culture’s super-ego (governmentality) and the guilt produced by the ego (self-surveillance). In other words, Grindr  lets gay males  “grind” or “digitally cruise” to find each other via mapping technologies that were originally designed by the state to track and monitor people for the sake of national security. The concept of governmentality, a monitoring process that creates a hegemonic regime based on self-normalization, becomes immediately intertwined with sexual desire.  What are the implications of this? How does desire change when it is linked to surveillance?

Instead of focusing on marginalized queer communities, Grindr: Surveying and Geolocating Sexiness, examines how dominant male-male desire, a social group that is often critiqued for marginalizing other queer identities, e.g. trans and queer-identified women, is marginalized and repressed by Grindr’s design. Following Foucault’s concept of reverse discourse, political and visual resistance to compulsory heterosexuality, I pose the following question: how much power of resistance does Grindr give to gale male sexuality? Does can one perform resistance and enact homosexual liberation within software that is designed to exclude and objectify male bodies? What are the implications of a software that is promoted to liberate, but ultimately discriminates? This paper is part of larger cultural discussion of what the users of Grindr ultimately desire and how this desire is regulated and maintained by civilization’s desire for control.

The prezi presentation can be viewed here:

Issues of privacy are immediately brought to the forefront. One cannot “Grind” or digital cruise Grindr profiles in private. Gay male identities on Grindr have to be censored, “maintained, and “mapped alongside the world” of heterosexual or ‘normal’ life. Grindr has provided an platform for gay males visibility that has been historically been denied, but the representations of male bodies that are visualized (re)render homosexual desire according to government-backed surveillance practices. Grindr will always be a public, and not just public in the sense of public space, such as “Grinding” or searching for men at the bar, but public to anyone that has access to a mobile device. For example, anyone with an Apple iPhone can download Grindr and can take a screenshot of the profile and post it on the web. This is evident with the emergence of a Tumblr website, called Douchebags of Grindr, with the tagline, “all your douchebag needs from the profiles of Grindr Tumblr censors. Long live the public web.” The website features screenshots of male profiles that were taken and (re)labeled to highlight the way the men enact governance on one another, by managing their profiles through identification and categorization (e.g. age, photo, location). In my discussion of the Tumblr parody of Grindr I explore several of these “douchey” profiles to show governmentality distorts desire and ultimately has the power to discriminate and “out” men in public space.