Labor of Love was featured in StartSomeGood’s “Let’s Start Some Good: What’s Next in 2013” yearbook. Read about my goals for Labor of Love in 2013 and my predictive trends for 2013 below and click on the image to view the entire yearbook. 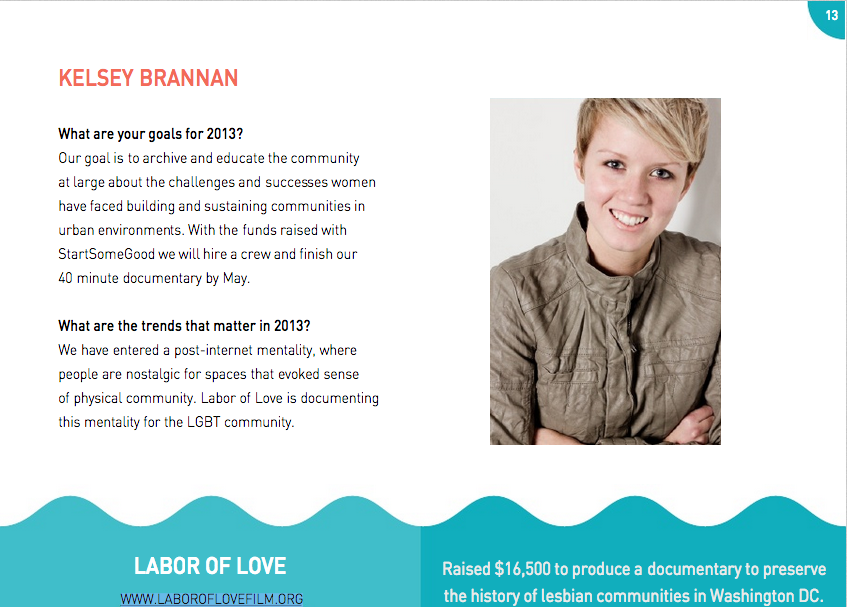 Labor of Love has evolved tremendously over Fall 2012. What started as a documentary that would only explore the history of one lesbian space in DC, the Gay Women’s Alternative (GWA), has turned into an ongoing archive project that explores the relationship of lesbian community space to cultural memory in documentary form. The evolution began when I sent my project to Denise Bump, an active member in the DC LGBT community, to see if she could connect me to women from the Gay Women’s Alternative (GWA) that I could interview. Bump had never heard of the GWA, but she herself was involved in heaps of other organizations, such as Lammas Bookstore. It then occurred to me: so many spaces are gone, why did they close? She then told me that she formed a DC Women’s Initiative group in March 2012 to try to make a new space.  Although the Initiative is still rather small in scale, all the women involved desire one thing: a new space to connect women of the diverse LBTQ community. The goal is to the launch the space in the first half of 2013, but public awareness, funding, the divides within the community (e.g. black vs. white, gay vs. lesbian) and time is the Initiative’s main barrier. After meeting with Bump, my project would serve as a perfect opportunity to interview women about what they want for the new space and to access the history of lesbian civic organizations in D.C., as the present is always confined by the the past.

As I rummaged through meeting minutes at Rainbow History Project archives located at the Kiplinger library, I somehow became nostalgic of these spaces I never had and that were, quickly fading from cultural memory. After several phone calls and 21 interviews later, it occurred to me that the DC lesbian community needs a new space to call their own, that is not a bar, but a safe space to support community projects. This ‘spatial alignment’ (for lack of better words) I developed with my subjects became a perfect opportunity to use my project as a form of assessment. While the documentary & web-based archive interweaves the stories of women from the past with the story of the DC Women Initiative’s space, the function of the video will be to create conversations about what women want from space both online and offline. Before the film’s premiere in April, I will edit several sequences where I screen the footage with various local DC LGBT groups to get feedback about the resources and events LBTQ women want from a community space (the first one will be held at the Washington Blade on Dec 13th). These focus group screenings have three goals: (i) to educate members of the LGBTQ community unaware of the challenge, passion, and effort put forth by female LGBT leaders, (ii) get more women involved in the process, and (iii) discover what women want from a new space in the community.

The project’s web-archive (http://laboroflovefilm.org) is where the public will access mini-stories about the history of lesbian space. Currently the site has fourteen clips of different women: June Crenshaw (DC Women’s Initiative), Elizabeth Birch (Former President of HRC), Nikki Smith (Ladies Rock This), and many more.  Part of the goal of placing all these stories in one virtual space, is to urge women to then meet offline to bring their spatial desires to action. There is also additional information about the production, our Start Some Good fundraising campaign, and the updated trailer. The new trailer opens with the audio of Esther Katzman, former Board Member of the GWA, speaking about the importance of the Gay Women’s Alternative in D.C. bridge with newspaper clippings from the Washington Blade during the 1980s. She notes that the GWA was a space where women could be “lesbian,” but at the same time have “elegance in their life.” The trailer then fades into the present, where women in the DC Women’s Initiative discuss the desire and need for a new space. The hope is that the trailer urges women to realize what is at stake – the ever present fading nature of physical lesbian spaces in D.C.

Moving forward, I and others in the DC Women’s Initiative are working on an Initiative survey to be handed out at the Dec. 13th event. The goal is to find out what events and resources women would want from a new community space. Next semester, I hope to solidify a larger set crew together to help me screen and present the sequences at various focus groups. Come the time of the final premiere in April 2013, the new space may not be open, but at least the public will be aware of the desire for new space and can move forward. After-all, the most important part of this documentary and research project are the events, conversations, and activism that occur around the film.