Why is that we choose to privilege certain aspects of LGBT history and hide others? What symbols and landmarks in our history teach new generations about LGBT identity and history? The District of Columbia (D.C.) is one of the most politically and ethnically diverse regions in the United States. The multicultural environment provides female identified lesbian and queer community with unique opportunities to create diverse communities. However, D.C.’s high profile community and the gentrified urban layout often segregates, rather than bring people together. In addition, the lack of money and transience within the lesbian and female queer community also forces organizations to come and go. There are missing sites; lesbian organizations that do not come to people’s mind when people think about lesbian experience in D.C. The Gay Women’s Alternative (GWA), 1980 -1993, is one of D.C.’s missing sites. This non-profit organization was created in 1980 to provide the D.C.’s Lesbian community with an alternative and safe space to socialize and discuss feminist and educational topics concerning the lesbian and gay women population. But due to a lack of money and other unknown reasons, the GWA closed down in 1993.

My documentary thesis project, tentatively titled Labor of Love, explores why a popular civic lesbian organization, the Gay Women’s Alternative (GWA 1980-1993), closed down in 1993. Through personal interviews with past GWA board members, present-day community leaders, and oral narratives, the film discusses past and present challenges of sustaining female space in D.C’s transient and high profile community. The film’s key questions are: Why are the same challenges that affected lesbian organization communities 40 years ago, such as segregation, lack of diversity, and lack of space, still happening today? How can cultural knowledge be passed down from one generation to the next? By having leaders and members of the DC LGBT community, from both past and present, reflect and (re)tell their stories about creating a support group, social function, or business, they will not only better understand the importance of their place, both physically and culturally in the community, but the challenges and successes they have faced in the process.

The film will not only feature contemporary female LGBT leaders, such as  Ebone Bell, founder of Tagg Magazine, Where The Girls Go, a local queer blog, The CooLots, a queer band, but women from the past, such as Elizabeth Birch, HRC executive director 1994-2004, Susan Hester, founder of the Mautner Project, and Leigh Gieger, founder of the Gay Women’s Alternative (GWA).

Here are some photos from last week’s shoot with Leigh Gieger (Special thanks to Christopher Siler, Lisa Tuvalo, and Rachel Marquart for volunteering their time to help with the shoot!). 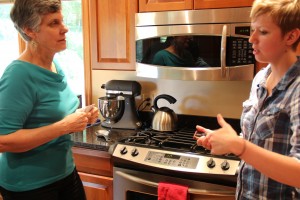 Explaining the shoot to Geiger. 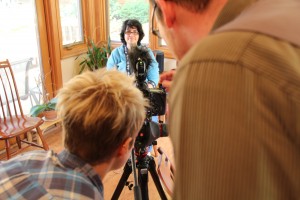 Setting up lighting, checking the framing. 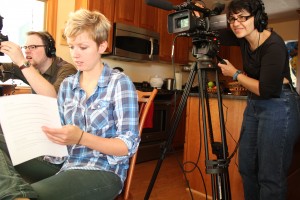 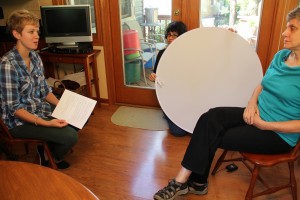 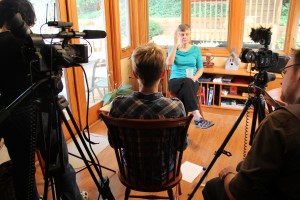 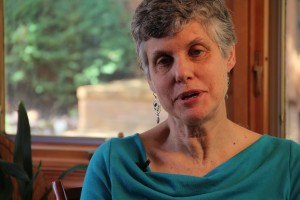 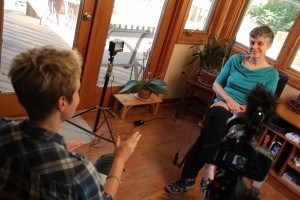