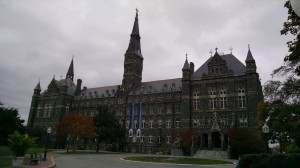 I snapped this photo on my way to the first TEFL practicum day.

The lesson went fairly well. There were a number of late arrivals due to the check-in process. I could probably have handled them less obtrusively, but I wanted everyone to feel welcome and not feel bad about being late since it was not entirely their fault. Three more desks also had to be located at one point, which is pretty hard to do without being obtrusive. It was clear during the first exercise that the students’ language level was higher than I had anticipated. The kinesthetic exercise I used to determine which skills the students found hardest and easiest was a bit cumbersome due to the size of the room. However, the discussion after the exercise was very good, the students were very articulate about why certain skills are easy or hard for them. The partner interview went very well. It might have worked better as an initial exercise, then moving to the kinesthetic activity after students had been sitting a while. Due to the size of the class, I split the students into two groups for the oral introduction phase. There was not time to reshuffle, so the students did not have the opportunity to hear everyone’s introduction. The teacher T/F activity at the end went well. I didn’t feel I had time to break the two large groups into smaller groups, but, obviously, students would have had more opportunity to practice speaking in smaller groups. Overall, I felt good about the lesson, though there were definitely things I learned that I will try to improve upon or implement next week.

Last Friday I did my first “student teaching ” for the Georgetown TEFL program. Normally, students begin practicums in the last month of the course after three months of online work. I was fortunate enough to begin earlier and in an atypical format. Our lead professor set up an online teaching opportunity for any willing volunteers with  a teacher at a High School in Lima, Peru.  I was provided with scanned pages of the unit in the textbook that the students had been working through that week. The teacher also briefed me on what other assignments the students were undertaking, which included independent research on the unit topic (inventions). I designed a speaking lesson to build on the unit content and the students own research. I had not done any teaching via the internet, but did not have any user generated technological problems. The Skype call did drop twice, the last time  near the end of the class. Overall, the lesson went very well and I have a much better idea of both the possibilities and limitations of teaching ESL online. The lesson plan I developed and my reflection on the experience is available here: Bollrud-Peru Online Plan 10-10-14