“It may sound cliché, but you really can’t give up just because you apply to an internship and do not get it…Finding internships that truly match your interests rather than just blindly applying everywhere will give you a better result, … END_OF_DOCUMENT_TOKEN_TO_BE_REPLACED

Clémentine Boyer Twitter: @cmb338 “I’d say that I’m using what I learned at Georgetown on a daily basis [at my internship]. News organizations now expect journalists to multi-task and Georgetown helps us to become good in every aspect of journalism. A journalist … END_OF_DOCUMENT_TOKEN_TO_BE_REPLACED

“The internship with CBS has given me the opportunities that I didn’t have in my previous experiences. It is great to work in an actual newsroom. It also gave me the opportunity to meet some big time journalists such as … END_OF_DOCUMENT_TOKEN_TO_BE_REPLACED 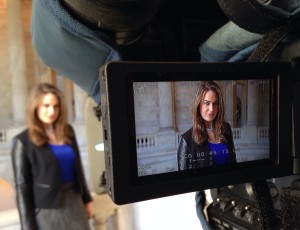 Mikayla Bouchard setting up for an interview with Senator John McCain at the Russell Rotunda on the hill.

Student and SPJ Vice President Mikayla Bouchard is getting a taste of international reporting from the comfort of Washington, D.C. As an intern for Britain’s Channel 4 News’ D.C. bureau, Bouchard works on long-form pieces about American politics for an audience across the Atlantic. Bouchard’s work focuses on research and booking, but she has also been encouraged by her editors to develop relationships with sources, chase down stories herself and even liveblog this year’s State of the Union for the network. We recently talked to Bouchard about her semester so far and asked her advice about looking for a rewarding internship. END_OF_DOCUMENT_TOKEN_TO_BE_REPLACED

Before ever coming to Georgetown, student Desire’ Moses had loved NPR Music. Then, during her second semester with the MPS Journalism program, Moses had the opportunity to be a part of the team she had long revered. As one of the music desk’s three interns, Moses worked with NPR’s content management system to put NPR’s music-related content online and build website pages for the First Listen series and other programs. She also was onsite for OK GO’s Tiny Desk Concert and saw a live taping of All Things Considered. After interning with NPR Music last spring, Moses is still temping for NPR and working as a research assistant for an NPR religion correspondent who is currently on book leave. END_OF_DOCUMENT_TOKEN_TO_BE_REPLACED

For two semesters now, Ivan Natividad has been at the forefront of innovative, hyperlocal journalism in Washington D.C. through his internship with Homicide Watch D.C. Natividad was first drawn to journalism because he wanted to help foster community dialogue, and after taking Crime Reporting with Matt Apuzzo, he jumped at the chance to intern with a small journalism start-up that focuses on a pressing concern in D.C. — homicide. Now Natividad has the unique opportunity to follow murder cases in the District from their preliminary hearing to their sentencing and to provide an outlet for people affected by these crimes to have their voices heard. We recently talked with Natividad about his experience at Homicide Watch D.C. and got his advice about seeking out the right internship opportunities. END_OF_DOCUMENT_TOKEN_TO_BE_REPLACED

Student Pamela Seaton’s eight-month internship at The Root DC was more than a supplement to her learning in the classroom or a hands-on introduction to the field of digital media. It was also a gateway to a job as an editorial aide with The Washington Post. As an integral member of The Root DC’s editorial team, Seaton posted the sub-section of The Washington Post’s content to Facebook and Twitter, posing questions for readers in order to generate interest and discussion. With the closing of the Post’s Root DC page in Spring 2013, Seaton moved across the building to KidsPostand the copy desk. Her role at the Post has changed since switching from social media to print, but, a year after beginning as an intern, Seaton still loves her work. END_OF_DOCUMENT_TOKEN_TO_BE_REPLACED

This summer, student Valerie Bonk participated in the Associated Press’ Global News Internship Program in the Washington D.C. office. Read about the experience in her own words and check out her photos from the summer.

Valerie Bonk
This summer I had the opportunity to participate in AP’s Global News Internship Program. The three-month, paid, cross-format, rigorous reporting position was by far the most challenging and rewarding experience of my career so far. The application process was intense. In addition to your resume and cover letter, you also need three letters of recommendation, an essay, and if selected, need to pass a panel interview with the heads of the various departments you’d be working with (text, radio and television). I would do it again in a heartbeat. I would have never imagined that I’d have the opportunity to report from the White House at this stage in my career. I’m forever grateful for the connections I’ve made and the knowledge I’ve gained from some of the leading reporters, editors and producers in the industry. Here’s a snapshot of my summer with the AP:

My Associated Press business cards given to us on the first week of our program. Quite an honor!

Former President Bill Clinton shaking hands after speaking at Arlington National Cemetery. My very first assignment on my first week was to cover the event where Clinton and Attorney General Eric Holder spoke at a remembrance ceremony for Civil Rights icon Medgar Evers.

At the White House covering a ceremony. Throughout this experience I had the amazing opportunity to cover several events and press conferences at the White House and Capitol Hill. During our first week we went over to the Capitol to get our congressional credentials, which opened many doors throughout the summer.

Vice President Joe Biden speaks at the unveiling ceremony for a statue of Frederick Douglass in the Capitol visitor center.

One of the highlights of the program was getting to see President Obama board Marine One and depart from the White House.

AP cameraman Dan Huff shoots footage for a story about the excruciating summer heat in DC.

For my television piece on the high cost of prison phone callsI conducted several interviews with inmates and their families. In this picture I am at the FCC interviewing a former inmate who was sexually abused while in prison and couldn’t afford to call home. I was awarded an internal AP “Best Seen” award for the piece, which aired on August 8.

In the Spring 2013 semester in the master’s in journalism program, Arielle Hixson (G’13) performed an incredible juggling act, taking classes in Clarendon while working full time in New York City as an NBC news associate. Arielle worked in the newsroom Tuesday through Saturday, commuted to the District on Mondays to attend her classes, then swung back up to NYC to make sure she made it to work the next day. Now, she is doing a similar balancing act as she continues on with her duties at the NBC affiliate in New York and works to finish her Capstone this summer.

While she has fallen into a travel routine, the work she does varies day-by-day. News associates for WNBC New York rotate through different areas of the newsroom and the 5 p.m., 6 p.m. and 11 p.m. newscasts for their first six months. Arielle started on the assignment desk, where she was field producing and interviewing for stories and then moved to the web team, where she now writes stories every day. Arielle’s experience has been both exciting and stressful. NBC is “a place full of really talented professionals who are also curious about a younger perspective and are always willing to learn,” she said. END_OF_DOCUMENT_TOKEN_TO_BE_REPLACED