Congratulations to faculty member Keith Jenkins for his promotion to general manager for National Geographic Digital, where he will focus on strategy.

Jenkins has been part of National Geographic’s team since 2013, when he joined as director of digital photography. Prior to his new position, he was executive editor for digital content. 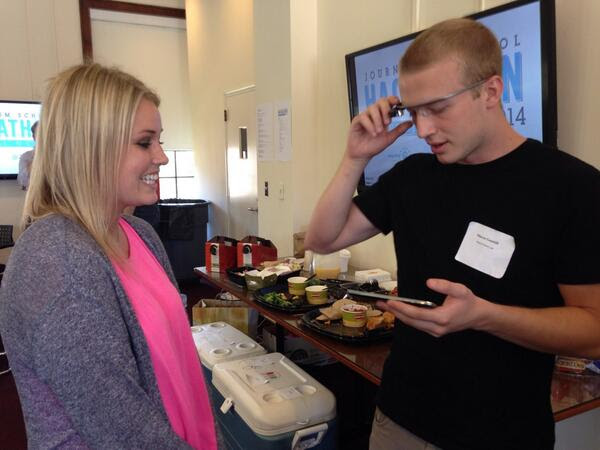 Student Julie Gilkison learns to use Google Glass at the Journalism Hackathon on May 31, 2014. (Credit: Nayana Davis)

Georgetown MPSJ students Julie Gilkison and Nayana Davis were tasked with a daunting challenge at the first Journalism Hackathon — helping to save journalism with a pitch.

In an event co-hosted by the University of North Carolina Chapel Hill and PBS Media Shift, students and faculty from journalism schools and programs across the country traveled to the college in early June to brainstorm product ideas that would help local news organizations solve media problems in a digital world.

The participants, who represented 10 universities, were assigned to groups by organizers based on their specific skill sets — some were strong writers, other more proficient at coding. The teams had 36 hours to work on a product pitch, which they had to present to a panel of judges that included local journalists and entrepreneurs.

In their own words, here’s what the students had to say about the experience:

On working with new people:

Nayana: I was a little uneasy when Julie and I were separated into different groups since neither of us really knew anyone else there. My team — named the red ninjas — consisted of students and faculty from UNC, Syracuse University and the University of Florida. Thankfully, the time constraints didn’t allow much time for awkwardness and discomfort with one another. We bonded quickly, realized our individual strengths and got to work.

What I found most incredible about my team was there were no strong egos. Although we didn’t always agree, we heard each other out, and dissecting some of the ideas that didn’t make it into final pitch did lead us to other ones that ultimately helped us win the hackathon.

Julie: I really didn’t know what to think of my group. Team “Animal” consisted of two UNC undergrads who had worked on projects similar to this before, an undergrad from Northwestern who knew all things coding and no things journalism, and two “professionals”: a professor from Northern Arizona and a working journalist and faculty member at University of Florida. Steve Johnson, from UF, was my age and had been working as a freelance sports photographer since he was 17.

The strangest part for me was being in limbo between the student and professional. The students in my group were young and sort of sheltered from the world outside of their universities, while the professionals were at the other end of the spectrum.

Nayana: We were challenged by the Raleigh Public Record, a local newspaper, to come up with a way to improve government transparency in the development process.

We came up with Voxity, an interactive map that allows residents of a community to select locations where developments are proposed, see what the status of the project is and vote on whether or not they approve of it. This tool could also be invaluable to local governments to see what the community really thinks about development proposals.

We thought this project would improve government transparency because it makes development proposals more digestible to community members, who no longer have to wade through hundreds of pages of documents that are hidden deep in a city website.

Julie: We had the same challenge as Nayana‘s group, and our pitch was very similar. Block Party was our solution; it was also an interactive map. Where Voxity focused more on the simplicity and community aspect of the project, my group (unsuccessfully) sought to use an interface already set in place by the city and used by the Raleigh Public Record to build on top of that in order to force government transparency.

Our proposal had everything and would have been a great solution, but it was taking on too much in too little time, and my group struggled with the presentation itself – whereas Nayana‘s group had a really solid one. (P.S.: She’s an actress!)

Nayana: The future of journalism is bright. I was very overwhelmed by the idea of trying to create a news product in a weekend, but somehow we did it!

If a group of strangers can accomplish this in one weekend, I’d be excited to see what would come about after a few more similar sessions or if we even had a full week.

Julie: I really didn’t know what to expect out of this weekend. Admittedly, we were a little bit hesitant and dare I say, intimidated, after the Friday night mixer. But Saturday was such a pleasant surprise and so much fun despite the long hours! I can’t wait to do another one, hopefully at Georgetown.

This is the future of journalism: a blend of media and technology. There’s no way around it, and from what I saw that weekend, there’s an outstanding group of multifaceted journalists that are ready to take it on.