Sexual activity across the life course among men who have sex with men: a systematic review of published data

Since Alfred Kinsey’s landmark report Sexual Activity in the Human Male was published in 1948, there have been few data examining the patterns of sexual activity among men over the life course, a concept grounded in life course theory, which refers to a multidisciplinary paradigm for the study of people’s lives, structural contexts, and social change, especially for men who have sex with men (MSM) (WHO, 2000). Herein, we conducted a systematic review of published data regarding the sexual activity among MSM across the life course. We identified three representative studies: Kinsey’s examination in 1948, the National Survey of Sexual Health and Behavior in 2010, and the National Survey of Family Growth in 2011. We found that changes in MSM sexual behavior were not addressed in these studies. We re-plotted the prevalence of sexual activity reported in two of these three studies by age categories. These studies provide three points which may inform the design of future studies examining sexual activity among MSM: 1) the psychosocial aspects of sexuality demand thoughtful and refined sampling techniques to encourage respondents to volunteer accurate information; 2) sexuality remains an important facet of life well into advanced age; ensuring that older populations are included in future studies is critical in developing a comprehensive understanding of sexuality; and 3) future studies should collect longitudinal, rather than cross-sectional data, as social and historical factors have the potential to obscure any results that might be obtained from individuals of different age groups.

Since Alfred Kinsey published his landmark study Sexual Activity in the Human Male in 1948, practices performed during sexual encounters, the circumstances surrounding these encounters, and the partners with whom individuals engage in sexual activity have become of interest. However, despite the growing body of knowledge of sexual behavior in general, there are limited data regarding the changing prevalence of sexual behavior among men over their life course.

The World Health Organization’s (WHO) 2002 report “Defining Sexual Health” includes a factual statement indicating that sexual health serves as a critical component of a full-spectrum approach to both public and individual health:

“Sexual and reproductive health and well-being are essential if people are to have responsible, safe, and satisfying sexual lives. Sexual health requires a positive approach to human sexuality and an understanding of the complex factors that shape human sexual behavior. These factors affect whether the expression of sexuality leads to sexual health and well-being or to sexual behaviors that put people at risk or make them vulnerable to sexual and reproductive ill-health. Health program managers, policy-makers and care providers need to understand and promote the potentially positive role sexuality can play in people’s lives and to build health services that can promote sexually healthy societies.” (WHO, 2006)

The spirit of the WHO’s report “Defining Sexual Health,” is twofold.  First, sexual health is an essential facet of human health writ large and, as such, ought to be studied thoroughly.  Second, no one group is more or less deserving of study than any other group with respect to sexual behavior.

When Alfred Kinsey published Sexual Behavior in the Human Male in 1948 (Kinsey et al., 1948), he attempted to study male sexual behavior in scientific terms. Given Kinsey’s use of referral sampling to recruit study participants, his work failed to provide a population-based examination of these issues (Kinsey et al., 1948).

While several studies have been conducted in recent years regarding sexual behaviors in general, these studies have typically focused on specific subpopulations and have been conducted in response to a particular topic of concern such as unintended pregnancy or sexually-transmitted infections (Reece et al., 2010). When sexual behavior dynamics were addressed, data were often collected cross-sectionally instead of longitudinally. Longitudinal, rather than cross-sectional, studies are necessary for the identification of patterns of sexual behaviors over time.

If we are to achieve a balanced and comprehensive understanding of human sexuality, the investigation and elucidation of MSM sexual behaviors over the life course requires significant research beyond what has been conducted to-date.  In this paper, we examine several studies in this field, identify their strengths and weaknesses, and provide suggestions for future research.

We conducted a systematic literature review of the history and current state of the study of sexual behavior among MSM across the life course to describe the methods and gaps in those methods employed in studies in this field.  The studies selected were published between 2007 and 2010.  They were collected based on PubMed searches for “MSM,” “sexual behavior,” and “life course.”  Papers focusing on sexually transmitted infections were excluded.

Alfred Kinsey and the “Homosexual Outlet”

Additionally, Kinsey discussed the frequency of gay sexual contact among both married and all males (both married and unmarried) across seven age ranges: 16-20, 21-25, 26-30, 31-35, 36-40, 41-45, and 46-50 [Figure 1].  Kinsey noted that MSM sexual activity and pre-marital intercourse with prostitutes were the only forms of sexual activity to increase with age among unmarried males (Kinsey et al., 1948).  His data suggested that the rise in MSM sexual activity with increasing age resulted from an increasing willingness to accept, and thus act on, preexisting tendencies for arousal by other males (Kinsey et al., 1948). 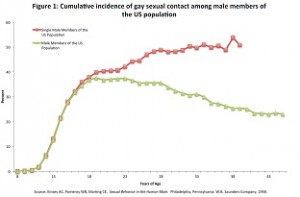 For married males, MSM sexual contact in the context of extramarital activity decreased from 10% of total sexual activity for respondents in their teens and twenties to 1% for respondents 50 years of age and older.  However, Kinsey noted that these figures were likely inaccurate possibly due to married respondents underreporting MSM sexual contact (Kinsey et al., 1948). These data do not concern issues of sexual orientation.  The only factors in question are the sex of the respondent, the marital status of the respondent, and the sex of the partner with whom the particular act was performed.

In the wake of the human immunodeficiency virus (HIV) epidemic in the 1980s, the importance of understanding the component of human sexual behavior became apparent, and a 1992 study was conducted providing a more contemporary picture of sexual behavior in the United States (Reece et al., 2010). The National Health and Social Life Survey of 1992, organized under the auspices of the University of Chicago, was the most recent nationally representative survey of adult sexual behavior in the United States (Herbenick et al., 2010).

The National Survey of Family Growth (NSFG) reported several metrics of sexual behavior relevant to the issue of MSM sexual activity across the life course. The most recent data were collected between 2006 and 2008 from a cohort of 13,495 male and female respondents ranging from 15 to 44 years of age (Chandra et al., 2011). 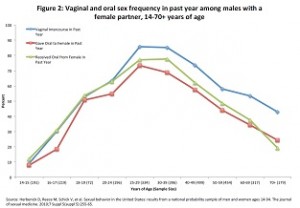 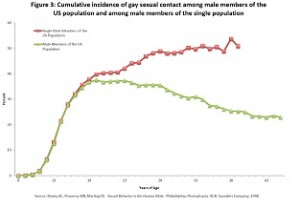 Additionally, subjects were questioned about sexual attraction and sexual identity.  The data included subjects reporting the sex of individuals to whom they were attracted and whether they considered themselves to be “heterosexual or straight,” “homosexual, gay, or lesbian, bisexual,” or “something else” (Chandra et al., 2011).

The research conducted since 1948 provides several points of reference for designing future studies on MSM sexual behavior.  First, the psychosocial aspects of sexuality have spurned the development and validation of audio-computer assisted self-interviewing (ACASI) technology to encourage respondents to volunteer accurate information about this sensitive aspect of sexual behavior. Second, sexuality remains an important facet of life well into advanced age; ensuring that older populations are included in future studies is critical in developing a comprehensive understanding of sexuality.  Third, whenever possible, studies should collect longitudinal instead of cross-sectional data, as social and historical factors have the potential to obscure any results that might be obtained from individuals of different age groups.

Despite the inclusion in the NSFG report of specific data regarding MSM sexual behaviors, the study elucidated age-related MSM sexual activity dynamics is limited by several factors. First, all study subjects ranged between 15 and 44 years of age and, thus, failed to provide data regarding sexual behavior across the full extent of the life course (Chandra et al., 2011). Second, the limited number of respondents reporting same-sex sexual contact increased the chance of sampling errors and decreased the accuracy of sub-group analysis (Chandra et al., 2011). Third, the data were collected from a cross-sectional cohort of subjects instead of following the same group of subjects across the life-course (Chandra et al., 2011).

The data presented in the NSSHB provide a cross section of sexual behavior across a wide range of ages. However, the lack of a longitudinal approach to the collection of these data is worth pause: cross sectional data do not allow for examination of changes across a follow up period (Herbenick et al., 2010).

This study collected data from 179 respondents aged 70 years and older (the oldest participant in the study was 94 years old). Compared to the 499 respondents aged 40 to 49 years old, this group is considerably undersized. Furthermore, behavioral data for individuals 70 years of age and older were presented as a single age range, eliminating the possibility of elucidating changes in behaviors among those individuals.

Moreover, expansion of study cohorts to include more participants 70 years of age and older would be useful in the investigation of this topic as older individuals are engaging in sexual activity at an increasing rate. According to Bancroft, a paradigm shift is underway in which older adults are increasingly more concerned about their level of sexual performance and satisfaction and consequently more willing to address these concerns in conversations with their doctors (Bancroft, 2007). In one previous study (Smith et al., 2007), an examination of sexual functioning beyond the age of 70 was examined. The study attempted to elucidate the prevalence of sexual activity (including intercourse, masturbation, oral stimulation, and manual stimulation), sexual inactivity (resulting from no partner, no desire, erectile dysfunction, pain, and partner refusal), and patient-physician communication about sexual functioning. Smith et al, reported that a significant portion of individuals over the age of 70 (18% of women and 41% of men) reported engaging in at least one type of sexual activity (Smith et al., 2007).

Taken together, recruitment by convenience and the small sample sizes used to date have limited the scope of investigation to specific sexual behaviors rather than to sexual health in general and to the generalizability of study findings to a larger population of MSM.

As such, the major challenge in understanding the sexual health needs of MSM has been the lack of US population-based data regarding sexual orientation.  The National Institutes of Health asked the Institute of Medicine (IOM) to assess the current knowledge of the overall health status of LGBT (lesbian, gay, bisexual and transgender) populations; to identify research gaps and opportunities; and to map out a research agenda to address these gaps.  The IOM findings were published in 2011 in its report,  The Health of Lesbian, Gay, Bisexual and Transgender People: Building a Foundation for Better Understanding (Institute of Medicine, 2011). As a result of this report, data regarding sexual orientation and gender identity will be included in all health surveys administered by the United States Department of Health and Human Services and other federally-funded surveys commencing with the National Health Interview Survey in 2014.   Additionally, the IOM committee recommends that sexual orientation and gender identity data be included in electronic health records.

Future epidemiologic and clinical studies to develop a coherent and robust life course model for MSM sexual health will be well served with these improvements in data collection.

Institute of Medicine of the National Academies  (2011).The Health of Gay, Lesbian, Bisexual, and Transgender People.October 2013, Washington.  Retrieved from http://www.iom.edu/Reports/2011/The-Health-of-Lesbian-Gay-Bisexual-and-Transgender-People.aspx