Objective: Many parents of children with autism and other developmental disorders report higher rates of parental distress than do parents of typically developing children.  The Georgetown University Hospital Autism and Communication Disorders Clinic (ACDC) features an interdisciplinary team that assesses children’s development across a number of domains, including cognitive, communicative, and motor abilities.  The team prepares a comprehensive clinical report for every child referred for evaluation; we systematically reviewed these documents in order to determine different sources of parental distress.

Background: Both the prevalence and incidence of Autism Spectrum Disorders (ASDs) have been on the rise over the past twenty years (Duchan & Patel, 2012).  Current estimates indicate that as many as one in 88 children will be diagnosed with an ASD (Wingate et al., 2012).  Parents, especially mothers, of children with ASDs have been shown to experience heightened levels of fatigue, distress, and depression, even a year after their child’s initial diagnosis (Giallo, Wood, Jellett & Porter, 2011; Taylor & Warren, 2011).  In addition, caregivers of speech-impaired children demonstrate heightened levels of anxiety and depression (Wink, Rosanowski, Hoppe, Eysholdt & Grässel, 2007).  Furthermore, parents of children with cerebral palsy and attention deficit/hyperactivity disorder (ADHD) also experience considerable psychological distress (Cheshire, Barlow & Powell, 2010; Harrison & Sofronoff, 2002).  Unfortunately, limited preventive interventions have been developed to address parenting distress and depression for these vulnerable populations.

Methods: We reviewed seventy-seven reports prepared by the ACDC between December 2005 and July 2011.  A number of variables relating to both the child’s symptomatology and potential stressors in his/her caregivers were extracted.  Data collection occurred between October and December of 2011 following the approval of Georgetown University’s Institutional Review Board (IRB).

Results: Fifty-eight (75.3%) of the children, ranging in age from two to nine years old, were diagnosed with some type of ASD (Table 1).  The rest of the sample had diagnoses that reflected a range of conditions, including ADHD and cerebral palsy.  Consistent with the published literature, children with autism presented with a wide array of co-occurring symptoms and behaviors that have been identified as stressful for parents (Phetrasuwan & Shandor Miles, 2009).  However, specific information about the level of distress and depression in caregivers was not included in clinical reports.  Recommendations regarding parents’ mental and emotional health were made by the clinicians in 49 of the 77 reports (63.64%).  Common suggestions were that parents consider respite care for their child or contact support groups and organizations.

Conclusions: Systematic data assessing the mental health concerns of parents of children seen at the ACDC was not collected as part of their child’s interdisciplinary assessment; however, clinicians were attending to these concerns during their interviews with parents, and recommendations for family support activities were included in the reports for the majority of families.  Nonetheless, this review supports the need for consistent documented assessment of parents’ well-being, especially given their heightened risk and vulnerability as evidenced by the scientific literature. 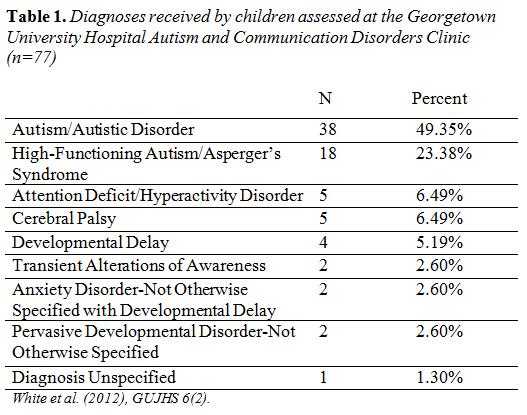