Is there a way to improve the American diet? Nutritional trends in the United States have transformed dramatically over the years, contributing significantly to the poor overall health of Americans and increased prevalence of diseases such as obesity and diabetes. A recent survey demonstrates that Americans continue unhealthy diets without realizing that their diets are harmful.

In tackling overall population health improvement, we must illuminate and prioritize public education about proper diet to instigate Americans towards healthier eating habits. Before this can be done, though, a reliable source on healthy eating guidelines is needed.

The United States Department of Agriculture (USDA) created a Food Pyramid to serve as the official set of guidelines for the constitution of a healthy diet. However, it has been widely criticized by scientists and nutritionists for its lack of backing of actual research.

In 2008, The Harvard School of Public Health formulated the Healthy Eating Pyramid, highlighting- along with exercise- limiting refined grains, red meats and dairy, and shifting to a plant-based diet. Those seeking to improve their own diet or those of fellow Americans could reliably turn to this food guide, which is backed by nutritional research, as their source.

As America’s diet has evolved, so too has its health declined. The result has been a stark increase in the prevalence of obesity among adults, which only continues to grow (Weight-control Information Network [WIN], 2014). Because obese individuals are at increased risk of diseases including but not limited to diabetes and cardiovascular disease, this issue remains a strong concern of health professionals. If poor diet contributes so evidently to poor health, why do Americans not change their habits? Evidence suggests that the problem is rooted in a lack of public awareness of the constitution of a healthy diet. In order to correctly educate the public, a reliable set of dietary guidelines based on nutritional research would be necessary. The official source, the USDA’s Food Pyramid, has been criticized for not accurately reflecting the findings of years of scientific research on nutrition. On the other hand, the Harvard School of Public Health’s 2008 Healthy Eating Pyramid contains many helpful changes relative to the USDA’s Pyramid, which are based on nutritional research. Those seeking to educate Americans should use Harvard’s food guide as an example of what constitutes a healthy diet. Such a food guide, if implemented properly, would likely contribute to the decrease in obesity-related diseases and the increase of overall health in Americans.

How has the American diet reached this state over the years? Kent Thornburg, Ph.D., Interim Director of Oregon Health & Science University (as of 2012) states that American meals traditionally consisted of meat, potatoes and vegetables, and meals were a family affair. As Americans began eating more fast food rather than home-cooked meals, consumption patterns became considerably unhealthier. Most food is now more likely to be determined by convenience and cost rather than considerations of nutritional value because of this new fast-paced lifestyle. Foods high in sugar, salt and fat stimulate pleasure centers in the brain, leading Americans to prefer these options over healthier, less tasty ones. In addition, cooking a dinner at home requires valuable time and effort, which could be spent at work instead. The negative consequences of this change—if they are indeed due to the change in diet as Thornburg argues—only became evident after a period of time. Obesity in U.S. adults has increased from 13.4 to 35.7 percent over the past fifty years (WIN 2014). In addition, more Americans than ever suffer from calorie malnutrition—an issue of getting too many calories and not enough nutrients. As a result, America is strapped with the highest costs of health care in the world and the unhealthiest population among Western countries. Thornburg believes the best solution lies in improving the American diet. What is preventing us from doing this?

It appears that Americans continue this unhealthy diet not because of a lack of concern for health, but because of a lack of knowledge regarding what is healthy. Northcut finds that nine in ten Americans claim to eat healthily, yet of the 1,234 polled, most made unhealthy food choices in their diet. For example, 43 percent drank one or more sugary sodas or sweetened drinks daily. Only one in four attempted to limit sweets, sugars and fats in their diets. A mere three in ten ate a recommended five or more servings of fruit and vegetables daily. Also, in terms of weight perceptions, a third of the responders reported healthy weights despite having the BMIs of overweight or obese persons. This data makes it evident that Americans lack an understanding of what constitutes a healthy diet and health in general, and could benefit enormously from proper education of a reliable food source.

The USDA’s Food Guide Pyramid, a tool showing much of different kinds of food Americans should eat, was instituted into school curriculums, media, brochures, and cereal boxes and food labels, yet health professionals widely criticized it as being based on questionable scientific evidence and not adapting to the latest research as it became available (HSPH, 2011). In response, the USDA instituted MyPyramid in 2005, which lasted six years until collapsing to criticism for being too confusing.  Its replacement, the much-simplified MyPlate (see Figure 1), continues to promulgate its shortcomings. MyPlate does a poor job of distinguishing junk foods from healthy ones. It does not distinguish harmful refined grains from whole grains, it places harmful salty processed foods in the same category as some unprocessed foods, and it does not highlight the danger of sugary foods. Some blame the USDA for being too influenced by lobbying efforts by organizations such as the National Dairy Council and the Wheat Foods Council, leading to poor recommendations in the new guide not accurately backed by nutritional research. A guide with better distinctions and backed by reputable research is surely needed. 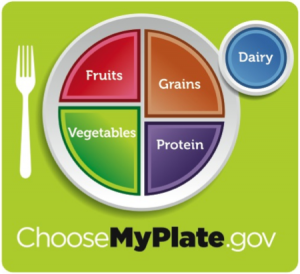 Figure 1: USDA’s official graphic of MyPlate. The sections of the plate represent the recommended portions of a daily diet. Grains and vegetables each take up over a quarter of the plate; protein, fruits and dairy each take up a little less than a quarter. Source: http://www.cnpp.usda.gov/Publications/MyPlate/GraphicsSlick.pdf

One potential solution is the Healthy Eating Pyramid, a food guide similar to the USDA’s, created by the Harvard School of Public Health in 2008 in response to a recognized need for a more accurate food guide for Americans (HSPH, 2011). The Healthy Eating Pyramid is backed by years of research on nutrition and health and is more descriptive. The findings from research led Harvard’s pyramid to elucidate on several significant differences than the USDA’s guide. The first, limiting dairy intake, is significant because of recent research’s indication that dairy does little to prevent osteoporosis or fractures. A second—limiting refined grain intake—is merited because grains are processed as sugars in the body and as such lead to the same health problems, such as diabetes. The USDA guide fails to highlight the dangers of red or processed meat, which are linked to increased rates of heart disease and diabetes. Harvard’s guide can also include more details that the USDA’s guide did not. For example, Harvard’s guide highlights the superiority of fish, poultry and beans alongside the avoidance of red meats. It suggests eating fish twice a week or shifting to a plant-based diet. With these changes based on nutritional research, the Healthy Eating Pyramid is a quality guide of what constitutes a healthy diet.

It is best to explore the exact details of Harvard’s Healthy Eating Pyramid in order to fully understand how it integrates food suggestions into dietary needs so as to improve well-being (see Figure 2). First and foremost, the pyramid highlights that exercise is intrinsic to healthy living. This activity helps one control weight by keeping in mind the simple fact that more or less calories are burned in relation to what one eats (HSPH, 2011). On the second level, the bricks are those of vegetables/fruits, healthy oils and whole grains. Simply, incorporating these components in the appropriate quantities would ensure that Americans get enough vitamins, fats and carbohydrates. On the third level are two bricks of nuts, beans and tofu on the left side, and fish, poultry and eggs on the right. The recommended plant foods on the left side provide fiber and additional vitamins and minerals valuable for the human body. The meat foods on the right side provide necessary protein, with a strong emphasis on fish for being rich in heart-healthy omega-3 fats, and some emphasis on poultry and eggs for being low in saturated fat. This distinction highlights how certain meats can be dangerous. On the fourth level is one brick, that of dairy, for which high intake has been associated with an increased risk of prostate and ovarian cancers but a low intake—which the pyramid recommends—can help one achieve enough calcium (vitamin D, on the other hand, can be fulfilled with supplements or more exposure to sunshine). Lastly, there is the “use sparingly” group, including red and processed meats, refined grains, sugary drinks and salt. In the Healthy Eating Pyramid, the comprehensive details paint a clear picture of the optimal diet. 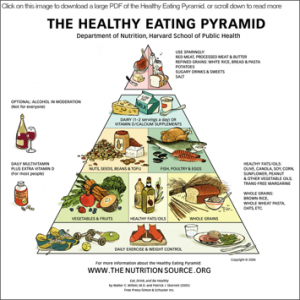 Figure 2: Harvard School of Public Health’s Healthy Eating Pyramid. Each brick within the pyramid reveals the suggested amount of each food group which should be consumed; larger bricks emphasize greater importance. Multivitamins and alcohol are included merely as light recommendations for their health benefits. Source: http://www.hsph.harvard.edu/nutritionsource/pyramid-full-story/

The state of American health is a serious concern. Whether lifestyle is to blame and it is difficult for people to switch to healthy foods, or they are simply not knowledgeable about what constitutes a healthy diet, an emphasis on education remains of prime importance in solving America’s health problems. We must address the misconceptions surrounding diet before people can begin modifying their lifestyles. In conjunction with our shift from primary to preventive care, diet must be addressed before people become so unhealthy that nutrition-related disease cripples them. The Healthy Eating Pyramid exemplifies how food guides can effectively provide information regarding diet to Americans. If reliable food guides can be made familiar to the public—be it through media, school billboards or even strategic placement of posters in restaurants—a healthier population will be closer to the American horizon than ever before.

Harvard School of Public Health. (2011). Food Pyramids and Plates: What Should You Really Eat? Retrieved from http://www.hsph.harvard.edu/nutritionsource/pyramid-full-story/