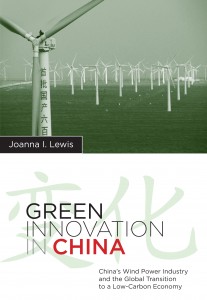 Green Innovation in China: China’s Wind Power Industry and the Global Transition to a Low-Carbon Economy

Now out in paperback! Published January 2015

The story of China’s rapid rise in the global wind power industry provides valuable insight into the country’s domestic energy strategies and global positioning, and into the evolving nature of technology transfer and diffusion around the world. China is beginning to serve as a center for global technological innovation, and green innovation from China could play a crucial role in the global transition to a low-carbon economy. China’s wind industry not only provides a compelling example of technological leapfrogging, it also demonstrates new models of technology transfer and knowledge across borders. Given global concern about the impact of China’s rapidly increasing energy needs on global supplies and its ability almost singlehandedly to change the global climate system, it is worthwhile to understand how and why Beijing has embraced green innovation.

“Green Innovation in China is a compelling exploration of how China is transforming itself into a clean energy powerhouse. This is a book that should be on the desk or nightstand of anyone who wants to understand where China’s leaders are taking their country and how they plan to get there.”

“Because there is no more important issue to future generations than climate change and no more important country in the effort to control greenhouse gas emissions than China, Joanna Lewis’s book on wind power in the PRC is particularly timely and welcome. Thoroughly researched and well-written, this informative volume goes a long way to helping us understand the critical role China plays in both the causes for and solutions to the global climate change challenge.”

“This is a terrific, wonderfully detailed book. A fascinating account of the development of the wind industry in China.”

“Joanna Lewis’s important book on the development of China’s wind power industry is an incisive look at a key part of China’s desire to transform itself into a high-tech green economy while meeting its responsibilities as the world’s largest energy user and second-largest economy.”

“China’s shift to embrace green growth is in its early stages but whether it succeeds or fails will have global significance, both for the environment as well as for China’s ambitions to move into emerging industries. Lewis’s work is a lucid look at the development of a key green-tech sector, and the larger lessons it holds for China’s innovative capacity.”

“Joanna Lewis’ Green Innovation in China is as important as it is timely. Offering a detailed exploration of China’s wind power industry, Lewis provides a rich analysis of the clean technology strategy of the world’s leading consumer of energy. In the process, she goes a long way toward promoting scholarly understanding about China’s quest to develop a low-carbon economy. While Green Innovation is required reading for anyone interested in China’s energy or environmental politics, it will likely appeal to a much wider audience. Scholars with a general interest in China, as well as anyone concerned about global climate change, will find Green Innovation a valuable source of information and analysis.”

“Joanna Lewis’s Green innovation in China provides an excellent overview of the Chinese wind power industry and the country’s efforts to become a global forerunner in the low-carbon economy.”

“Lewis’s book is based on a decade of primary research in the fields of China’s renewable energy, climate and innovation policies. The book is written in a detailed and knowledgeable style. It elaborates on interesting case-studies of transfer of wind energy technology from Denmark, Germany and the United States to China, thereby explaining the roots of China’s booming wind energy industry. Lewis further provides fascinating in-depth analysis of competition and cooperation in the wind energy industry between China as an emerging player and the established global players in Europe and the United States.”

“In this book, Joanna Lewis, provides a detailed account of China’s role in the global climate change situation and the innovative measures they are taking towards a greener future.”

“In a well-researched argument, Lewis makes the case that China is becoming a hub for global innovation with domestic and foreign wind technology firms.”

“As a China policy consultant and scholar, Lewis brings an unusual, embedded perspective to her closing evaluation of competition and cooperation between the United States and China – the world’s largest energy consumers, greenhouse gas emitters, and economies.”

“While this book is accessible to a broad audience, it will be particularly valuable for policymakers and industry decision-makers interested in emergent technology markets.”

Now available from Columbia University Press, Amazon and other sellers. 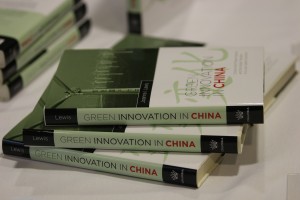