Finding a Diet You Can LIVE With

Challenges to Good Nutrition 2: this is the second entry in a series examining the personal challenges to good nutrition. @DrTomSherman or @GUFoodStudies

I discussed the evidence for, and the many attractive advantages of, the Mediterranean Diet at the 2013 edition of the Achieving Optimal Health Conference in a talk entitled: Finding a Diet You Can LIVE With: 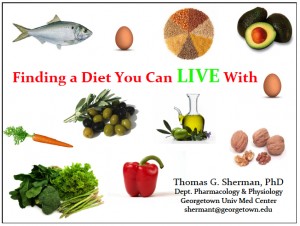 I will provide a link to my PowerPoint presentation, and perhaps a video of the talk, once available; in the meantime, let me outline the main points of the presentation. 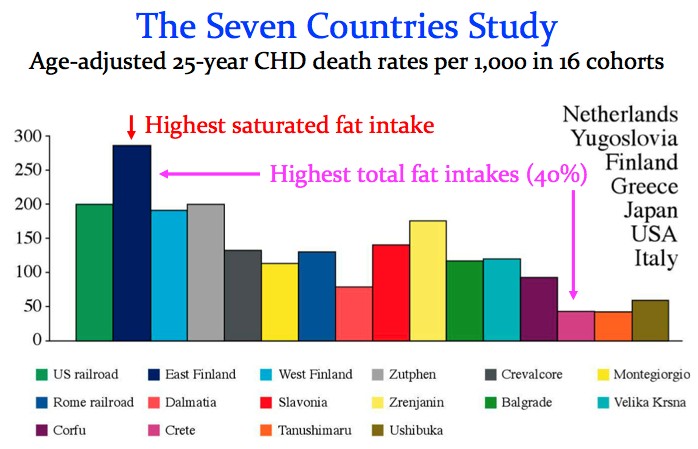 The groundbreaking Seven Countries Study was launched in 1958 by the epidemiologist, Ancel Keys, to investigate the relationships between diet and coronary heart disease (CHD). Systematic dietary and health surveys of 16 cohorts revealed many important relationships between food and disease and specific risk factors for heart disease, but three in particular gained considerable focus: there were significant associations between saturated fat intake and circulating cholesterol levels with incidence of CHD, and southern European diets as typified by the diet of Crete, and eventually to be known as the Mediterranean diet, was linked to low rates of CHD. The attention on saturated fat and cholesterol, although unfortunate and misdirected, gained the upper hand, and contributed to dietary recommendations that laid the groundwork for the low-fat craze of the 80s and 90s. 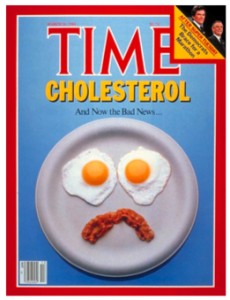 The low-fat craze became official with the March 1984 issue of TIME magazine that contained an article entitled: Sorry, It’s True. Cholesterol Really Is A Killer. 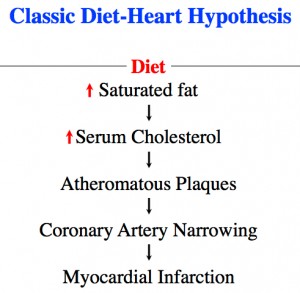 The nutrition and medical communities embraced the findings of the Seven Countries Study and other studies of the time. The classic diet-heart hypothesis, shown above, resulted. Although it is true that increased cholesterol levels do pose a risk for CHD, dietary cholesterol plays only a very minor role in blood cholesterol levels, and dietary saturated fat has proven to be a distractor from more important consequence of the new dietary guidelines.

Although the scientific community was aware of data clearly distinguishing between the health consequences of dietary saturated and unsaturated fats, recommendations to limit saturated fat were considered too complicated for the public to understand; thus, the all-fat-is-bad message became nutritional mantra for the next several decades. This message was reflected in the original USDA food pyramid and influenced the dietary guidelines. Unfortunately, these guidelines resulted in the replacement of dietary fats with sugars, starch, refined grains, and other easily digested carbohydrates that directly contributed to excessive weight gain and an increased risk of diabetes. Perhaps most profoundly, avoiding all fats meant the average consumption of monounsaturated and polyunsaturated fats decreased considerably. 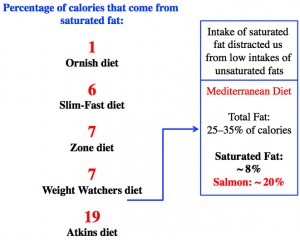 Unsaturated fat intake was the unintended consequence of unwarranted attention on saturated fats. Food companies seized upon the opportunity to satisfy (and create) the new market for low-fat foods. The descriptor, low-fat, became synonymous with healthy. Low-fat versions of common foods, and formulations for new food categories were marketed heavily. Obviously, labeling a product as low-fat­ was more acceptable to the buying public than high-carbohydrate, or high-sugar, but this is what they were. People bought them, people ate them, and people gained weight. 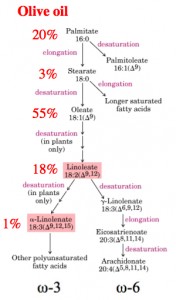 The consumption of eggs (cholesterol), nuts (fats), and vegetable and olive oils plummeted under the weight of the low-fat movement, in part because they contained saturated fat. Olive oil is comprised of nearly 70% unsaturated fat, mostly oleate, a monounsaturated fat, and these fats became rare in the American diet. 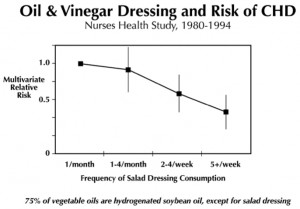 It proved difficult to study the health impact of diminished unsaturated fat intake because it was rare to systematically find a non-hydrogenated oil that was commonly consumed. Non-diet oil and vinegar salad dressing was the one exception, however; an examination of its consumption among women in the Nurses Health Study cohort revealed that the risk for CHD decreased with increased salad oil intake. This decreased risk was not due to elevated salad consumption, but from increased vegetable oil intake. 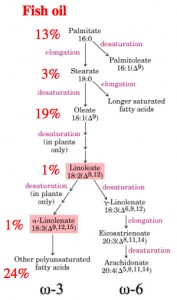 Fish and fish oil consumption also decreased during the low-fat craze, and low fat fishes, such as tilapia became popular. Tilapia is a bland abomination, containing only trace amounts of the long-chain, omega-3 polyunsaturated fats that are critically important for proper brain development. 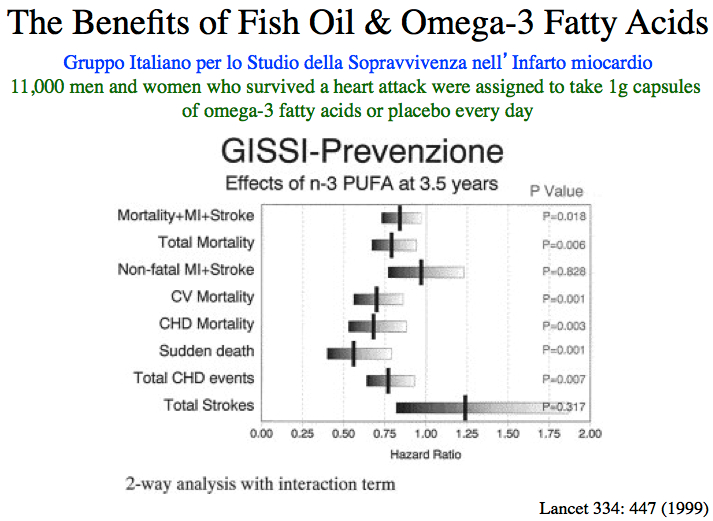 One of the first systematic clinical studies of fish oil and heart disease encapsulated the dietary problem perfectly. The GISSI-Prevenzione Study examined the impact of daily 1-gram capsules of omega-3 fatty acids in a study of 11,000 men and women who survived a first heart attack. After less than 3.5 years, sudden deaths were cut in half for those receiving fish oil. Sudden death is the consequence of a heart attach or fatal arrhythmia. The hypothesis is that omega-3 fatty acids contribute to nerve membrane compositions that yield better neuronal function, including maintenance of cardiac rhythmic function. This is significant, and once it is known that mono- and polyunsaturated fats are not simply calories, but contribute directly to proper physiological function, it also becomes clear why an all-fat-is-bad message has proven so counterproductive. 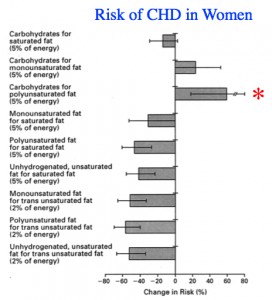 For example, in the above study, replacing unsaturated fats with carbohydrate lead directly to a significantly increased risk of CHD. This is essentially what the dietary guidelines have recommended. 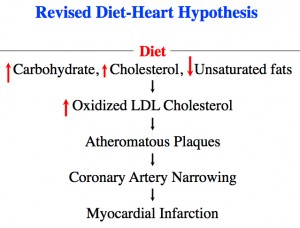 I propose an alternate, revised evidence-based diet-heart hypothesis. Recent studies have failed to find an significant association between saturated fat intakes and CHD, but rather, decreased unsaturated fat intakes increase risks for CHD. Thus, the above hypothesis argues that increased carbohydrates, such as sugars and processed grains, and decreased unsaturated fats, contribute to increased cholesterol that can lead to heart disease. 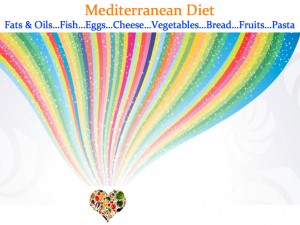 Furthermore, as I have written previously, the Mediterranean-style Diet offers an ideal combination of vegetable and olive oils, fish and other seafood, eggs, and fruits and vegetables. In addition, the breads and pastas within diets like this are consumed with generous portions of olive oil, which dramatically slow the digestion and absorption of the sugars. 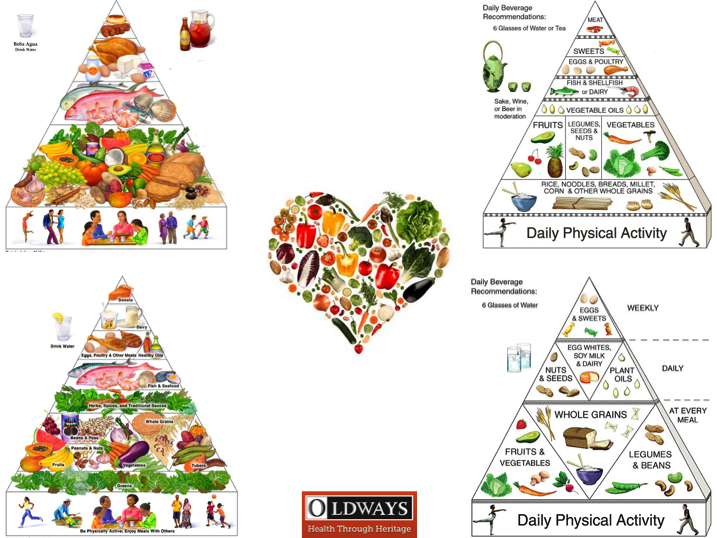 I say Mediterranean-style diet, for as well illustrated in the dietary pyramids provided by Oldways. Every culture and ethnic group has a version of the Mediterranean Diet that can be adapted to your tastes and preferences. Embrace it.

Future Topics in the Series:

This entry was posted in Analysis/Policy, Commentary. Bookmark the permalink.

5 Responses to Finding a Diet You Can LIVE With