This is the tenth entry in a six-week series of topics following the syllabus of my Human Nutrition & Obesity graduate summer course. Each entry offers a snapshot or principal take home message from that lecture. This lecture was entitled: Good Fats and Better Fats 2: Seafood and Fish Oil. @tgs777 or @GUFoodStudies

The National Center for Health Statistics within the Centers for Disease Control and Prevention publishes a massive set of data every year, and buried within Table 92 on pages 284–286 of the 2012 edition, entitled Health, United States, 2012 are some truly amazing numbers. I graphically transformed the data below, and the amazing part becomes obvious: nearly 50% of all adults over 65 years of age are on statins: 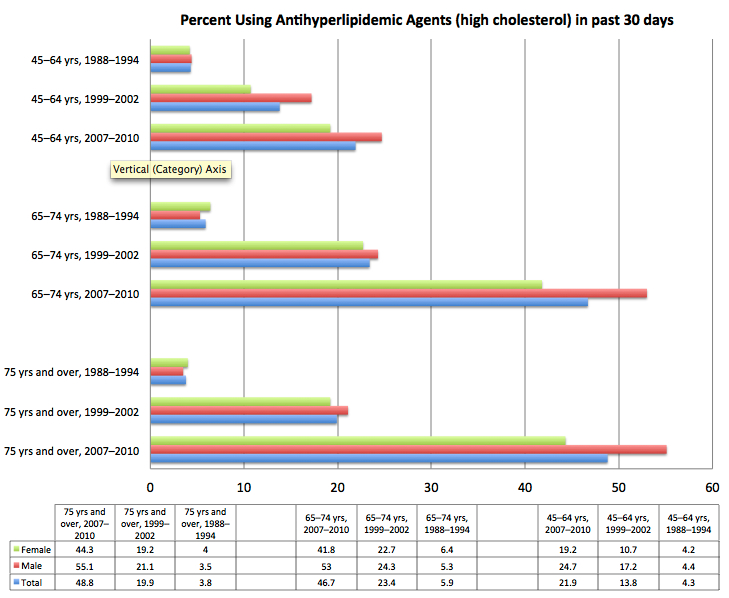 As we discussed in the previous post, the increase in statin use, and the decrease in absolute risk of death for all cardiac patients due to modern medical care appears to explain why recent studies have failed to substantiate the benefits of fish oil or a Mediterranean diet in decreasing the risk for a second heart attack.

You could be forgiven for thinking that taking statin drugs is accomplishing the same thing as eating a diet rich in fruits and vegetables, nuts, seafood and olive oil. Certainly, many behave this way, and certainly, early statin marketing as a means to “continue eating the foods you enjoy” encouraged this thinking. 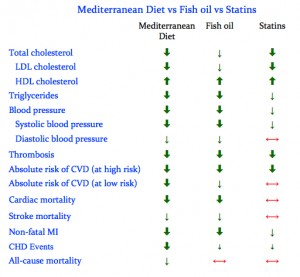 There are several perplexing conundrums in the data above, including how is it that statin use has an insignificant impact on cardiac disease mortality in clinical trials, and yet the absolute risk of death for modern cardiac patients has been cut by 65%. One must, I presume, point to the totality of contemporary medical care as an explanation.

Continuing the blood pressure example from above, however, there is no reason to believe that the mechanism by which statins lower blood pressure (albeit modestly), is at all similar to the mechanisms employed by a cardioprotective diet or fish oil. The long chain polyunsaturated omega-3 fatty acids in fish oil are incorporated into cell membranes and affect endothelial and vascular functions directly by increasing the fluidity of cell membranes and augmenting endothelium-dependent relaxation by nitric oxide (NO). Mediterranean diets, in addition to their use of seafood, are abundant in fruits and vegetables rich in potassium and low in sodium, encouraging a lowering of blood pressure via natriuresis. How statins lower blood pressure is unclear, but it would seem unlikely to be via either of these two pathways.

A very informative statement within the conclusion section of the final report of the Lyon Diet Heart Study states “Major traditional risk factors, such as high blood cholesterol and blood pressure, were shown to be independent and joint predictors of recurrence [of a heart attack], indicating that the Mediterranean dietary pattern did not alter, at least qualitatively, the usual relationships between major risk factors and recurrence. Thus, a comprehensive strategy to decrease cardiovascular morbidity and mortality should include primarily a cardioprotective diet.”

This conclusion raises two interesting, additional conclusions: (1) that the Mediterranean diet does not lower the absolute risk of cardiovascular disease simply by regulating the risk factors for CVD, and (2) the possibility that the pharmaceutical treatment of risk factors associated with a recurrence of heart disease might offer additional benefits. In other words, the authors predict that there might be value in taking both a statin and eating a Mediterranean diet or taking fish oil, suggesting the combination might offer a synergistic decreased risk.

I am willing to consider this idea for survivors of a first heart attack, for it is exactly this population that statins work best, but given that the evidence for widespread statin use in those at a low risk of heart disease is weak at best, my personal recommendation is to simply eat a cardioprotective diet. That being said, there is some evidence that the combination of a statin and fish oil supplement produces a synergistic effect, as shown for triglyceride levels.

Thus far, in two clinical studies, one in Australia and another in South Korea, the impact of combination therapy (statins + fish oil) is significant only on circulating triglyceride levels, and has no significant effect on total cholesterol, LDL, HDL or blood pressure.

If anything, rather than advocating combination therapy as a potentially valuable option for those having survived a first heart attack, I would argue that these data indicate that a Mediterranean diet rich in seafood offers an attractive, side-affect-free, alternative to long-term statin use.

1 Response to The Mediterranean Diet & Fish Oil versus Statins