This is the ninth entry in a six-week series of topics following the syllabus of my Human Nutrition & Obesity graduate summer course. Each entry offers a snapshot or principal take home message from that lecture. This lecture was entitled: Good Fats and Better Fats 2: Seafood and Fish Oil. @tgs777 or @GUFoodStudies 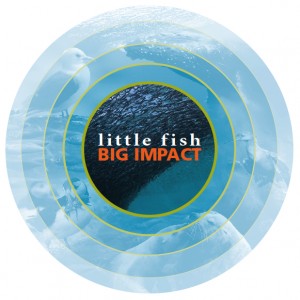 Beginning in 1985 and continuing for the next 18 years, a steady stream of studies were published that countered the prevailing low-fat trend and argued, sometimes strongly, that fish and/or fish oil consumption decreased the risks for a second heart attack in those having survived a first coronary event. Several of these studies remain landmark studies in epidemiology, and two 1999 studies, in particular, well represent the group: the Lyon Diet Heart Study and the GISSI Prevenzione Trial. 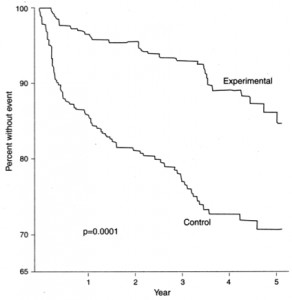 The Lyon Diet Heart study compared a Mediterranean diet that included more fish and olive oil, whole-grain breads, root and green vegetables and fruit to a control “prudent” Western-type low-fat diet (much like the American Heart Association diet). Five years after the first infarction, the protective effect of the Mediterranean dietary pattern was significant (see figure at left), with ~86% of subjects on the Mediterranean diet experiencing neither cardiac death or nonfatal myocardial infarction, compared to 71% on the AHA diet.

The GISSI Prevenzione Trial (Gruppo Italiano per lo Studio della Sopravvivenza nell’Infarto miocardio) was even more straightforward, assigning 1g capsules of omega-3 fatty acids or placebo to 5,700 men and women who had survived a heart attack. After more than 3 years, the omega-3 group had 10% fewer deaths, second heart attacks, and strokes, and the incidents of sudden death were cut by 50%.

All of these results, including 11 eligible studies involving 13 different cohorts and 222,364 participants, with an average 11.8 years of follow-up, were combined into a landmark 2004 meta-analysis entitled Accumulated Evidence on Fish Consumption and Coronary Heart Disease Mortality: A Meta-Analysis of Cohort Studies that demonstrated a clear association between increased seafood consumption and a decreased risk of CHD mortality: each 20g/day increase in fish intake was related to a 7% lower risk of CHD mortality (p < 0.03). It is now standard practice in Europe to send home every patient who survives a heart attack with a prescription for purified fish oil, or omega-3 fatty acids (see NY Times article).

It all seemed so clear and well established … and as the pernicious cycle of nutritional advice is want to do, nearly 10 years later, the results of three large studies appeared to throw cold water on this long history of evidence.

The Supplémentation en Folates et Omega-3 (SU.FOL.OM3) trial [BMJ 341: c6273 (2010)], The OMEGA Trial [Circulation 122: 2152 (2010)] and The ORIGIN Trial [NEJM 367: 309 (2012)], all large clinical trials, and all failed to support the routine use of omega-3 fish oil supplements for reducing cardiovascular events following a heart attack. This was different from other seemingly contradictory nutritional information, however, for these were not trials that reversed recommendations based on good intentions and no data, such as the original recommendations to eat margarine, fiber, low-fat foods and anti-oxidants. These were high quality clinical trials reversing 18 years of high-quality clinical trials. What is going on?

A very reasonable explanation for the failure to demonstrate clinical effectiveness of fish oil was articulated in an analysis published in the European Heart Journal in 2012 entitled Fish oil and overga-3 fatty acids in cardiovascular disease: do they really work? The authors argue that the dramatic changes in the treatment and management of cardiovascular disease patients in the ten-year period between the two groups of clinical trials.

The first drug capable of habiting endogenous cholesterol biosynthesis, atorvastatin (Lipitor), was approved in 1996 and first became available in 1997. Beginning in the late 1990s, therefore, the inclusion of a statin into standard cardiac disease practice significantly changed the risk of sudden death and of a second heart attack faced by all heart disease patients.

Most importantly, remember why all of these clinical trials targeted survivors of a first heart attack in the first place. Targeting high-risk populations is standard practice for observational and clinical trials because it increases the statistical likelihood that an adverse event will be encountered. Designing a clinical trial for a cardiovascular disease treatment in one million college students, for example, who be silly, for the odds of encountering a single heart attack, let alone a statistically significant number that can differentiate between the treatment and control group, would be vanishingly small. That is why lung cancer studies target smokers and asbestos mine workers, and cirrhosis studies target alcoholics, etc.

The increase in statin use, and the decrease in absolute risk of death for all cardiac patients appear to explain the difficulty in obtaining statistical significance and the apparent loss of effectiveness of omega-3 fatty acids in secondary prevention. Survivors of a first heart attack, once receiving modern medical care, are no longer at very high increased risk of a second attack. Interesting.

This does not mean that omega-3 fatty acids are not important in cardiovascular health, but it does demonstrate that the benefits of fish oil are now much more difficult to demonstrate. No responsible physician, for example, will argue that because of statins, a good diet is no longer required. But if you accept that these benefits have already been established, the challenge now is to gain an understanding of the different mechanisms underlying decreased CVD risks with fish oil, a Mediterranean diet, and statins.

I will explore this in the next posting.