Embracing the Mediterranean Diet at Any Age

This is the eighth entry in a six-week series of topics following the syllabus of my Human Nutrition & Obesity graduate summer course. Each entry offers a snapshot or principal take home message from that lecture. This lecture was entitled: Good Fats and Better Fats 2: Seafood and Fish Oil. @tgs777 or @GUFoodStudies 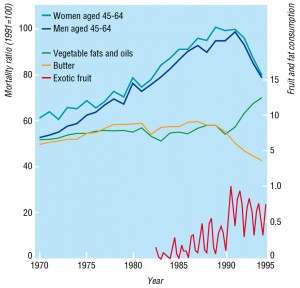 Between 1960 and 1991, the population of Poland served as a collective poster child for cardiovascular disease. As illustrated in the graphics above, death certificates citing diseases of the circulatory system as cause of death increased 70% for men during this period, and mortality from ischemic heart disease for both men and women doubled. Starting in 1991, however, the rate of mortality began as sharp a decline has ever been experienced in a country not at war. Although there are always multiple possible explanations for any epidemiological observation, a significant sequence of events that began in 1990 with the fall of the iron curtain offers a particularly reasonable set of causes. The fall of the iron curtain lead to the loss of price supports for butter and lard, leading Poles to switch to much less expensive vegetable oils, contributing directly to an increased ratio of consumed polyunsaturated to saturated fats (from 0.33 to nearly 0.49). That, and the increased availability of fruits and vegetables, comprise the best explanations for the dramatic decrease in heart disease. 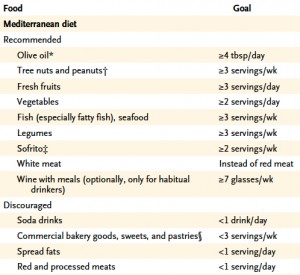 Studies substantiating the benefits offered by diets rich in unsaturated fats, and fruits and vegetables, continue to be released, and no one diet better epitomizes this style of healthy eating more than the Mediterranean Diet. In April of this year, for example, a well publicized Spanish study in the New England Journal of Medicine, entitled Primary Prevention of Cardiovascular Disease with a Mediterranean Diet investigated the impact of adopting a Mediterranean diet on a total of 7,447 adults (age range, 55 – 80 years) at high risk of cardiovascular disease. Participants were not advised to cut calories or to try to lose weight, but simply to eat foods within a Mediterranean diet. The trial was stopped after 4.8 years when it became statistically clear that cardiovascular events in the diet group were significantly lowered compared to a typical low-fat diet. The primary end-point in the study of myocardial infarction, stroke and death from cardiovascular disease was reduced by 30%. 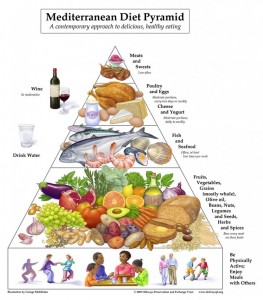 Of particular significance to everyone reading these results is that this study involved adults at risk of cardiovascular disease changing their diets and realizing dramatically decreased risks of disease in only a few years. This is completely consistent with the results of the EPIC-elderly prospective cohort study published in the British Medical Journal in 2005. This study involved almost 75,000 men and women, aged 60 or greater, encouraged to adopt a Mediterranean diet. When participants were scored for extent of adherence to the diet on a 10-point scale, researchers found that a 2-point increase in adherence corresponded to an 8% reduction in mortality.

Both of these studies demonstrate that it is never too late – you are never too old – to gain significant benefits from a change in diet, especially in that the Mediterranean diet is not a low-calorie or restrictive diet, but a change in eating behavior.

Make the dressing: Mince garlic on a cutting board and sprinkle heavily with salt; using a knife, scrape garlic and salt together to form a smooth paste. Transfer paste to a bowl and whisk in oil, juice, mustard, shallot, and salt and pepper; set aside.

Make the salad: Arrange all ingredients in separate rows on a large serving platter; drizzle dressing over all ingredients, season with salt and pepper, and garnish with basil and scallions just before serving.

1 Response to Embracing the Mediterranean Diet at Any Age